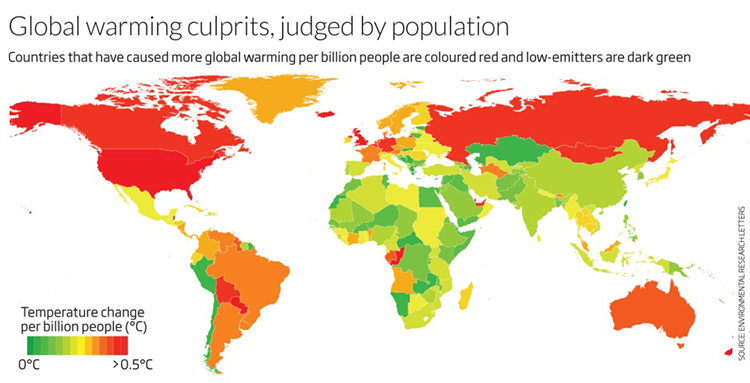 It’s a chart that no one wants to top, but global warming’s worst offenders, in absolute terms, are the US, China, Russia, Brazil, India, Germany and the UK. New calculations suggest that these nations are responsible for more than 60 per cent of the global warming between 1906 and 2005.

Damon Matthews of Concordia University in Montreal, Canada, and his colleagues calculated national contributions to warming by weighting each type of emission according to the atmospheric lifetime of the temperature change it causes.

Using historical data, they included carbon dioxide from burning fossil fuels and changes in land use – such as deforestation. They also accounted for methane, nitrous oxide and sulphate aerosols. These together account for 0.7 °C of the world’s 0.74 °C warming between 1906 and 2005.

“It was surprising to see some of the less industrialised countries with such high rankings, but this also reflects their CO2 emissions related to deforestation,” says Matthews. 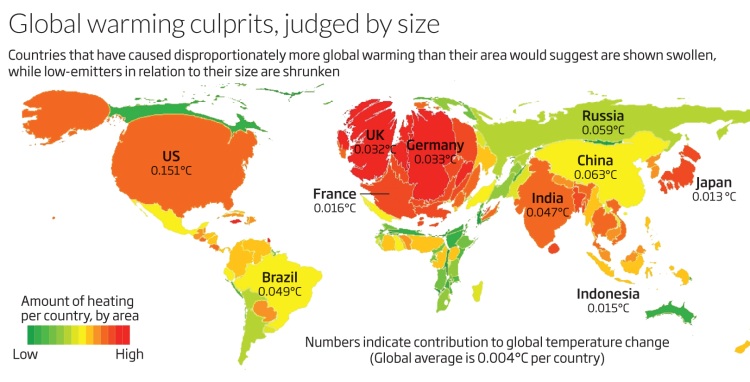 As a visual aid, the team produced a map (above) in which the countries are stretched or shrunk depending on their contribution to warming in relation to their size. Western Europe, the US, Japan and India are bloated beyond recognition; Russia, China and Brazil stay roughly the same; and Canada, Australia and most of Africa become stick thin. In this light, the climate contributions of Russia, Brazil and China don’t seem so out of line; they are in proportion to their landmasses.

Dividing each country’s climate contribution by its population, arguably a fairer measure, gives a different picture. When calculated this way, the top seven positions are held by richer nations, and China and India drop to 19th and 20th, respectively.

Whichever way you cut it, some countries always come out on top, but not everyone thinks this makes them automatically responsible. “Is it fair to blame the UK for what it did in 1850?” asks Glen Peters of the Center for International Climate and Environment Research in Oslo, Norway.

Dirty coal was the only option in 1850, but poor countries today have access to clean technologies like solar.