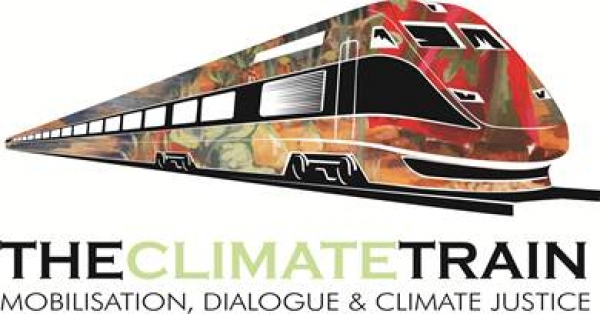 The Climate Train has made a detour and is stopping over at Bosman Station instead of Centurion from today (Friday, 11 November) until Sunday.

More interesting round table discussions and fun awareness raising events are planned after an interesting and well-attended programme earlier this week at Nasrec Station. We are continuing a conference about “Women and Climate Change”, started yesterday and ending on Sunday, hosted by Gender CC Southern Africa – Women for Climate Justice and another by Women in Environment.

Tomorrow, Saturday 12 November, we continue our focus on the “Climate Change & the Youth” with lovelife hosting another mini-conference in the train’s conference carriage.

Johannesburg City Parks has also teamed up with our onboard team of tree planting activists Ambush, which had been creating impromptu “guerilla” gardens along the train route since its departure from Cape Town on 28 October. Today, the SA National Biodiversity Institute and Ambush is hosting community groups, with a programme including the planting of a “Climate Change Tree” in the Pretoria National Botanical Gardens.

A group of Ga-rankuwa learners from Indalo Yethu’s fast-growing Eco Clubs at schools would also visit the train to be inducted to climate change and awareness on our Knowledge Carriage and on the platforms through the range of interactive awareness events. The train is a moving platform for engagement with marginalized and vulnerable communities and to raise awareness on climate change among South Africans.  Thousands of learners have already visited the train’s creative workshops, film festival, tree planting, story-telling and drawing classes, while many of them have taken part in the ongoing Earth Forum’s – small group discussions about people’s personal relationship with Mother Earth.

Also continuing today is the innovative photographic competition for the youth organized by our train partners, the Embassy of the Republic of Germany and the German International Development Agency (GIZ, Deutsche Gesellschaft für Internationale Zusammenarbeit GmbH).  Entitled “Climate Change: In the eye of the beholder”,  five workshops on climate change and photography is taking place along the route of the Climate Train, concluding with a photo competition for the participants and the winning entries to be exhibited in Durban during COP17.

The Climate Train is spending this week in Gauteng before it departs for Limpopo and Mpumalanga on Sunday night.

THE PUBLIC IS WELCOME TO VISIT THE TRAIN DAILY BETWEEN 9H30 AND 17H00 – no reservations required.

Under the banner – Mobilization, Dialogue & Climate Justice – the Climate Train represents an unprecedented outreach programme, visiting 17 towns and the surrounding countryside on people’s climate hopes, aspirations, experiences and solutions en route to COP17 in Durban, which commences at the end of this month.

Indalo Yethu, the South African Environmental Agency, in collaboration with the British Council and COPART, with the support of the Department of Environmental Affairs, the Passenger Rail Agency of South Africa (PRASA) and the Embassy of the Republic of Germany, lovelife, SANB and GIZ, have embarked on an extensive awareness raising and engagement process through the Climate Train.

On Thursday, PRASA formally welcomed the train at Nasrec station with fanfare. 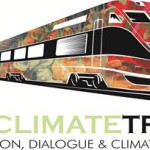