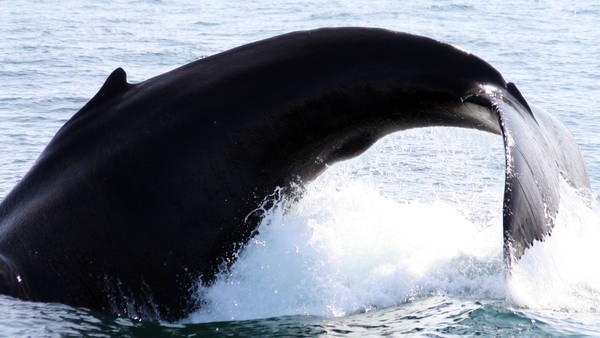 With the help of new technology, researchers are capturing the details of humpback whale behavior on their North Atlantic feeding grounds.

When the whale known as Touché is hungry for a school of fatty fish, he circles below them, fashioning a net of air by streaming bubbles from his blowhole. Then he corkscrews toward the surface of the Gulf of Maine, herding the fish into an ever tighter packet with the bubbles and his 30-ton body. Finally he opens his jaw wide, takes a monstrous gulp and relaxes, breathing deeply at the water’s surface.

Then he dives again. Over and over.

Touché’s feeding strategy, captured in June by an electronic tag attached to his back, is of keen interest to scientists tracking North Atlantic humpback whales off Cape Cod.

more knowledge with every tag

“Every time we go out and put another tag on, we learn something else,” said Dave Wiley, research director of the Stellwagen Bank National Marine Sanctuary in Massachusetts, who returned to shore recently after plying its waters for two weeks with researchers from several institutions.

For Dr. Wiley, the most striking insight is that each humpback has its own set of behaviors, often confounding efforts to generalize about the species.

“It’s frustrating and complicated and fascinating all at the same time,” he said.

More broadly, he and his colleagues hope to use their findings to push for changes in fishing and shipping rules to protect the humpbacks.

The Stellwagen sanctuary is prime habitat for a pencil-size schooling fish called the sandlance that draws a host of predators, from the humpbacks to fin whales, minke whales, dolphins, striped bass and bluefin tuna.

Yet the sanctuary’s proximity to land — 25 miles from Boston and three miles from the tip of Cape Cod — also means it is heavily used by humans.

On a bright summer day, its waters may be packed with half a dozen whale-watching boats and thousands of recreational and commercial fishing vessels, sailboats and yachts — and that’s just at the surface. The depths abound with ropes connecting strings of lobster pots and webs of fixed fishing gear that stretch across like tennis nets.

Most human-caused deaths of humpbacks occur when whales are struck by passing ships or become entangled in fishing gear, Dr. Wiley said. But policy makers could not reduce the risks because they did not know enough about how the whales move underwater.

“Our whole goal is to collect data to influence policy,” Dr. Wiley said.

For decades, humpback behavior was poorly understood because of the difficulty of shadowing the whales as they roamed the North Atlantic. The breakthrough was the DTAG, engineered in 1999 at the Woods Hole Oceanographic Institution in Massachusetts.

Unlike satellite tags, which transmit location, typically over a long period of time, DTAGs stay attached for 36 hours at most and record information like speed, depth and audio. They also carry a three-axis accelerometer that measures the front-to-back, side-to-side orientation of the whale.

Heading out for two weeks each summer since 2002, Dr. Wiley and a handful of colleagues have successfully tagged humpbacks 90 times, in some cases the same individuals over multiple years. The tag data is overlaid with acoustical studies of prey biomass and, for the last two summers, images from National Geographic’s so-called Crittercams, which bring back video showing how whales use different parts of their bodies while feeding and coordinate their movements while traveling in groups.

Last month, the taste of success was in the salty air as Dr. Wiley’s team unloaded its gear from the 187-foot research vessel. In two weeks, they had tagged 21 humpback whales and identified about 160 individuals, adding a wealth of information to a decade’s worth of observations. 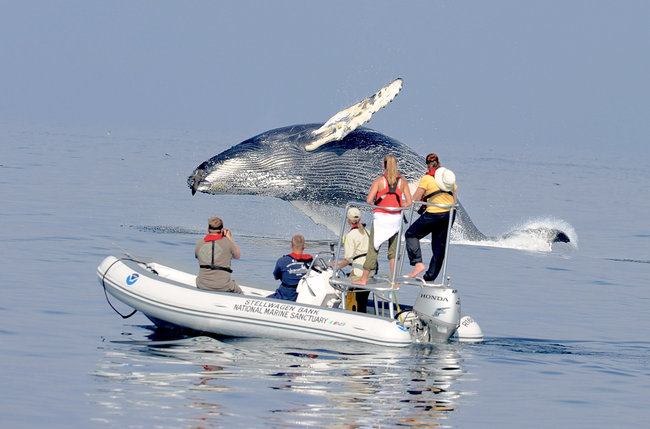 “We probably have one of the largest databases for fine-scale foraging behavior of anywhere in the world at this point,” he said.

The data has revolutionized humpback research and conservation in the sanctuary, showing scientists where the whales spend their time in the water column while on a dive, what they do at different depths, how they move around and when they vocalize.

“The DTAG is sort of a revelation and a revolution,” said Ari Friedlaender, a marine ecologist at Duke University who has taken part in the Stellwagen project since 2006.

Conventional satellite tags, while deployed for longer periods, “only give you a position when the animal comes to the surface,” he said. “The DTAG measures the orientation of the whale 50 times a second as well as the audio — everything the animal hears and every sound the animal is making.”

The tag, about the size of a pack of Twinkies, has four suction cups and is attached to a whale by extending a pole.

The tag is programmed to pop off after a predetermined amount of time, although some get bumped off or shaken off early. Then it floats to the surface, where the researchers retrieve it and download its data.

Scientists have been focusing on New England’s humpback whales since the late 1970s, when they realized that each one had a unique pattern of pigmentation on the underside of its tail, said Peter Stevick, an ecologist at the College of the Atlantic in Bar Harbor, Me., which maintains the official North Atlantic Humpback Whale Catalog.

The catalog is a compilation of photographs of whales’ tails taken all over the North Atlantic by scientists, whale enthusiasts and tourists. Today it contains photographs of about 7,000 individuals. (Dr. Stevick estimates the global humpback population at around 20,000.)

He said that multiple sightings of individuals help researchers understand the whales’ travels. For example, humpbacks photographed feeding in the Gulf of Maine in the summer have been photographed in the winter in the Caribbean, where they mate and calve.

slow but surely results pay off

Slowly but steadily, there have been payoffs from this research.

In 2007 the shipping lanes between Boston and New York, which cross the Stellwagen sanctuary, were shifted to avoid whale-packed areas, partly because Dr. Wiley’s DTAG data showed that humpbacks spent 60 percent of their time within 50 feet of the surface, in striking distance of boats’ hulls.

In 2009 the National Oceanic and Atmospheric Administration began requiring fisheries to use ropes that sink rather than traditional floating ones to connect lobster pots and crab traps. The floating ropes arch above the seafloor, posing a potential risk to deep-diving whales, but no one realized that until the Stellwagen DTAG data showed whales diving straight to the bottom and rooting around.

Now the researchers are trying to figure out how much time the whales spend within 13 feet of the bottom, where vertical panels of so-called gill nets are set.

things can always get better

While the humpbacks in the sanctuary, started in 1992, are better protected than they once were, there’s room for improvement, researchers suggest.

Each national marine sanctuary develops its own regulations. In the Stellwagen sanctuary, people are banned from releasing hazardous materials and from any activity that would alter the seafloor. Yet there are no fishing or boating regulations there, although some seasonal state and federal statutes apply that overlap with its waters.

Dr. Wiley suggests, for starters, that strict limits on the speed and approach distance of whale-watching boats would keep the whales safer.

Given the extent of human intrusions, people ask him why he doesn’t head to calmer waters to study humpbacks. To him, the answer is obvious.

“You can go anywhere and study animals and figure out what they do,” Dr. Wiley said. “But if you want to return something to them, you need to be working in places where they’re at risk, and they’re at risk right here.”

Up close, scientists are learning what whales do at different depths, how they move around and when they vocalize. Image source: Ari Friedlaender/NOAA