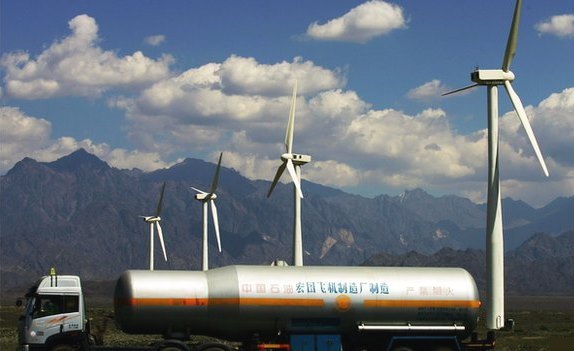 China is now by far the world’s biggest investor in renewable energy, far outstripping the US. Image: Getty

In what has been described as a real surprise by the International Energy Agency (IEA), annual global emissions of carbon dioxide experienced zero growth in 2014, even as the globe’s economy continued to grow.

According to IEA data CO2 emissions for 2014 were 32.3 billion tonnes, the same as 2013, meanwhile the global economy grew by 3 per cent.

While this is not the first time that growth of emissions has stalled, on previous occasions it was coupled with a significant economic downturn such as the Global Financial Crisis in 2009 and the collapse of industrial production with the collapse of the Soviet Union.

On this particular occasion it appears to be driven by structural changes in China and decarbonisation and enhanced energy efficiency across China, the United States and Europe.

In a development that many analysts expected would not occur until several years into the future, China’s coal consumption declined by 2.9% in 2014, with an accompanying 1% fall in carbon dioxide emissions, while the economy grew by 7.4%.

In the face of hazardous levels of air pollution, the Chinese Government has put in place a range of controls in an effort to curb coal consumption, which is the predominant cause of that nation’s harmful levels of air pollution. This includes aggressive targets for improvements in energy efficiency as well as restrictions on the burning of coal in particular regions, and the establishment of some regional carbon emissions trading schemes (although to date, these have involved only weak emission limits).

In addition, China has become the largest installer of renewable energy across both wind and solar. Thanks in part to concerted government programs, Chinese manufacturers now dominate the top 10 of solar PV panel producers, displacing Japanese, US and European competitors.

And lastly, the government has been trying to curb significant overcapacity in production of industrial materials, such as steel and cement which are large consumers of coal.

The US has also been active in decarbonising its electricity supplies and pushing improvements in energy efficiency. The boom in shale gas has been one driver but other factors have also been important. Last year solar PV represented 32% of all newly installed power generating capacity and wind made up another 23%. This followed on from 2013 when solar and wind made up 36% of new capacity and 51% in 2012.

In the European Union a surge in the installation of renewables and flat to declining electricity demand has also pushed out fossil fuel generators and led to disastrous financial results for some major power utilities.

Australia emissions also on the decline

Similar changes have been occurring in Australia as well, where emissions have experienced declines in recent times. After more than a century of year-on-year growth, electricity demand has begun declining in recent years – mainly due to improved energy efficiency in the residential and commercial sectors. In addition, solar and wind now completely dominate new additions of power supply.

This recent news could help to build momentum for a favourable agreement out of the major climate conference scheduled for Paris in December this year. The IEA’s chief economist, Fatih Birol commenting on their data, told the Financial Times:

“There could not be better news for Paris.”

One of the key sticking points in the past has been that each major jurisdiction has been reluctant to commit to major emissions cuts for fear other jurisdictions would not do the same and gain an economic advantage. With China, the US and Europe all demonstrating significant emission control efforts, this may help overcome such fears in Paris.