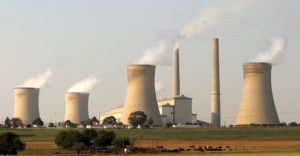 Completed in 1975, Arnot Power Station in Mpumalanga is a coal-fired power plant operated by Eskom.

As our new Minister of Mineral and Energy Resources fights to keep our economy in the dark ages, aided and abetted by a media sector credulous enough to repeat ‘clean coal’ rhetoric,* it’s worth trying to get a sense of the full damage being done. As a Minister, his duty is to a Constitution that aims to extend the human and socio-economic rights of all South Africans; but his policies take us in the opposite direction.

We can see part of this picture by looking at two power stations that offer us a real-world South African comparison of the permanent job creation potential of renewable energy, and shows that sticking with coal can cost 50% of future possible direct jobs, with at least 1,000 times more climate destruction (but probably far more).

The comparison here is between Eskom’s 2100MW Arnot Power Station (800 jobs) and the Ilanga-1 Concentrated Solar Power (CSP) with storage facility in the Northern Cape (80 jobs).

This is solar with built-in storage, so it’s dispatchable renewable energy that can supply the grid even when the sun is down.

The average annual electricity production of the Arnot Power Station over the past 3 years was 9 675gWH.

Solar thermal power does also have carbon dioxide emissions related to manufacture and operation; these are estimated at 23g of CO2 per kWH, or 23 tonnes per gWH. 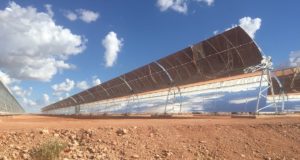 The annual electricity production of a 100MW solar trough CSP facility in SA is estimated at 394gWH annually (p. 77). Multiplying Ilanga-1’s annual power production of 394 gWH by the CO2 intensity of trough CSP suggests Ilanga produces 9062 tonnes of carbon dioxide annually, with a social cost of carbon of R6m. Job figures for Ilanga-1 were found here.

The social cost of carbon is a ‘policy tool that attaches a price tag to the long-term economic damage caused by emitting one ton of carbon dioxide into the atmosphere’. Note that this SCC figure is the low-end figure used by the Obama administration, and many SCC estimates are far higher.

*Re ‘clean coal’, carbon capture and storage may be a necessary part of climate solutions, but coal can never be clean.