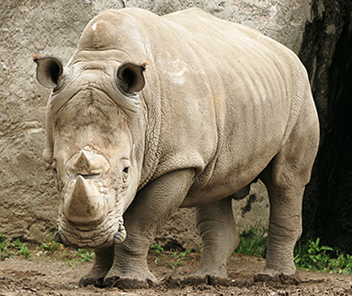 They’re among the world’s oldest species of mammal. Rhinoceros and their ancestors have been around for nearly 55 million years and, at one time or another, nearly 100 different species of these incredible creatures have roamed the planet. Now, only five species remain — white, black, greater one-horned, Javan and Sumatran — and three of those are critically endangered.

Though wild rhinos face a difficult plight, the challenge can be overcome. Conservationists are coming together worldwide as part of a huge effort to save these giant creatures, and even small contributions to help raise awareness can make a big difference.

The word rhinoceros comes from two Greek words: rhino, meaning “nose”, and ceros, meaning “horn”. And that horn is actually what has made these beautiful beasts a target for hunters. Just a century ago, more than a half million rhinos wandered the continents of Africa and Asia. Today, their numbers have been reduced to less than 30,000 in the wild.

A distant relative to horses and zebras, rhinos are among the largest living animals — the white rhino is the largest after the elephant. But their size isn’t enough to keep them safe from poachers.

According to the International Rhino Foundation’s Operation Stop Poaching Now campaign, about 1,000 rhinos were killed in 2013. Through Sept. 1 of this year, a staggering 769 rhinos had been poached — roughly one rhino every eight hours!

At the heart of this crisis are differences in cultural beliefs. Many Asian cultures erroneously believe that rhino horn holds special healing properties. People use ground horn in hot tea and other serums to treat all sorts of ailments, from colds and flu, to headaches and arthritis, to snakebites and countless others. Some myths even say the horn is an aphrodisiac.

As useful as chewing your nails

In reality, rhino horn is made of keratin, the same material found in human hair and fingernails. And it’s been scientifically proven to be no more effective at treating ailments as chewing your own nails or hair.

Conservationists are finding it difficult to overcome centuries of cultural tradition — difficult, but not impossible. Thanks to the diligent efforts of conservation groups like the International Rhino Foundation, which the Indianapolis Zoo supports, some rhino populations are actually increasing. 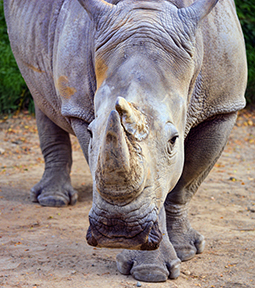 Two decades ago, the number of black rhinos in the wild had dropped to just 2,300. But intensive anti-poaching efforts have helped these amazing mammals rebound to about 5,000. The greater one-horned rhino has come back from even more dire straits. After their population dipped to less than 200 in the mid-20th century, they now number around 3,300 in the wild.

White rhinos have been one of the biggest success stories for rhino conservationists. Twenty years ago, only about 6,400 of these creatures survived in the wild. Now, with around 20,000 roaming the African savannahs, there are more white rhinos left in the wild than all other species combined. However, like all rhino species, white rhinos still face significant threats.

The key to saving these magnificent animals is education, and everyone can help through simple actions like spreading the word and supporting rhino conservation efforts.