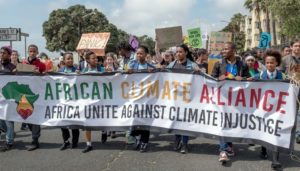 The third major climate protest of 2019 in Cape Town, once again organised by the African Climate Alliance.

People have commented on the virus in many different ways. You may have seen posts connecting the impact of the coronavirus with positive changes in the environment. We are greatly concerned by these, and as climate justice activists, we wish to address this urgent issue.

COVID-19 has definitely changed our lives; isolation, working from home and shocking news headlines have all had an effect on us. Although the lockdown has successfully forced us to change our activities, the measures have had more negative impacts on our society than it has had benefits for the environment.

Many social media posts are commemorating the revival of our ecosystems due to the global shutdown. However, this has led to messages expressing gratitude for the spread of the virus. The reduction of our environmental impact should not have to rely on a crisis. Thousands of lives have been lost and thousands more are on the line. The justification of these fatalities is an example of eco-fascism. Eco-fascism is a radical ideology of unfortunate growing popularity that puts our species’ existence at fault for the climate emergency. They often support eugenics, prioritizing a specific, smaller group of people who should remain on earth instead.

Oftentimes, eco-fascists propose the sacrifice of human life to reduce overpopulation, which they believe will lead to a more sustainable future. Misleading narratives around “overpopulation” can lead to dangerous ideas, such as xenophobia and racial supremacy. The belief that ‘humans’ are by nature a virus to our planet isn’t true: our climate crisis was not caused by our mere existence, but by our flawed system. We have the potential to transform it into a new civilization that co-exists with nature.

Posts portraying human life as a disease are incredibly harmful. They ignore our ability to change and play into the eco-fascist narrative.

They also shift the blame entirely to target marginalized groups such as the impoverished and fail to hold the people who have actually created the most damage accountable. The coronavirus’ casualties are often those not prioritized by our society. Thousands are being forced to wait in endless queues and have lost their jobs due to the lockdown.

The reason there was such drastic change made in reaction to COVID-19 is because its impact was felt immediately by people from all cross-sections of society. It has shown us that we have the ability to unite and confront an emergency. The effects of climate change are already starting to be felt in South Africa, as seen with our ongoing water scarcity. Although climate change is not always as noticeable to all of us, once this pandemic passes it is important we act with the same urgency. The fact that we are seeing a revival of our environment proves that a sustainable world is possible. Let’s use this time as an example going forward and treat every crisis as a crisis.

We are climate justice activists, not only climate action activists. We need to remember that key to climate action is climate justice. This means that, when addressing environmental issues, the social needs of communities must be taken into account. We recognize that with every change that is made, people are affected. A just transition to a green world means that nobody is left behind.

While we will be forced to adapt our lifestyles and sacrifice certain aspects, this does not mean that human lives should be lost in the process. Let’s get something straight: we do not need thousands of people to die for the world to begin healing. What we need is a change of system.

Whatever appeal eco-fascism may have to some, it is counter-productive to those of us committed to climate justice. In conclusion, we ask that you are wary of its existence in your circles. Remember its harms and call it out where you see it. In these times of uncertainty, it is vital that we join together as a nation to eliminate not only this virus but the dangerous extremism that has accompanied it.

By Mani Alexander and Noa Brawermann

Mani Alexander (17) and Noa Brawermann (16) are activists from the African Climate Alliance (ACA), a youth centered affinity group calling for socio-environmental justice in South Africa. ACA organized three major climate protests in Cape Town in 2019 and continues to call for widespread action on the planetary crisis.