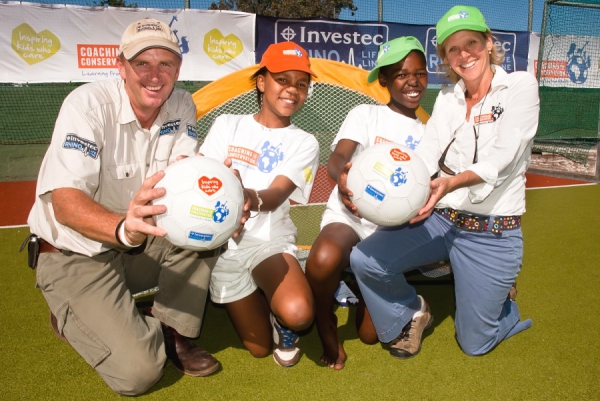 Conservation is scoring through a soccer-based education programme for grade five learners whose neighbours are the big five nature and game reserves in the Eastern Cape.

Girls and boys from 13 schools in and around Grahamstown are being taught to “stalk like a leopard, change direction quickly like a rhino or run like a cheetah,” says conservationist and educationist Lesley McNutt, who founded Coaching for Conservation® in Botswana 10 years ago with her husband Dr JW (Tico) McNutt.

Investec Rhino Lifeline is working in partnership with Coaching for Conservation for the eight-week pilot introduction of the programme to South Africa. Investec Asset Management has supported the highly successful programme in northern Botswana for the past four years.

“The Eastern Cape is the perfect place to introduce the programme because it is one of the few places in the country where school children are in almost daily contact with wild animals,” says Lesley McNutt. “They either see the animals through the fences when travelling to school and back, or have family members working on the reserves. The local economy is largely driven by wildlife conservation,” she says.

Investec Rhino Lifeline’s Dr William Fowlds has worked closely with McNutt to create a special rhino edition of the Coaching for Conservation curriculum. Fowlds has introduced field excursions, where the learners are taken on game drives through the Amakala Game Reserve to experience the animals in action on their own “sports fields”.

A total of 13 schools are taking part in the eight-week programme, which started on 7 October. The children will have received a total of 20 hours of coaching and learning. Coaching for Conservation is hosted by St Andrews College and DSG in Grahamstown for the schools in the area, and at the new Sidbury sports club between Grahamstown and Port Elizabeth for the rural schools.

The programme, which is presented by qualified teachers and coaches, aims to do more than teach children about the value of the wildlife they see around them. It aims to establish a connection to the wild animals by relating things children do while having fun on the soccer field to the lives and behaviours of these iconic and threatened wildlife species.

It is presented to children aged between 10 and 12 because research shows that this is the age when they will benefit most from the holistic programme, which incorporates life skills.

“C4C aims to build confident healthy youth who care about themselves, their future, and the environment they are growing up in. Our motto reflects these core values: Respect Yourself, Respect Each Other, and Respect your Environment.”

“Coaching for Conservation tackles these issues through an innovative sports curriculum which marries football skills to wildlife behaviours and conservation messages by using games and skills that iconic species use in the wild to survive and thrive. For example, when teaching the importance of teamwork, the wild dog coach illustrates the vital role of teamwork for survival, cheetahs teach the value of speed and agility, leopards bring lessons of territoriality to the field by learning to play your position, and rhino are remarkably agile. Like elite athletes, these skills and strategies help each animal to thrive and to be resilient in times of adversity, just as our children need to be,” she says.

“By fostering a meaningful link between young people and wildlife through knowledge and experience, there is a relationship and a reason to be invested in the continued survival of their mentors: a reason to care,” she says.