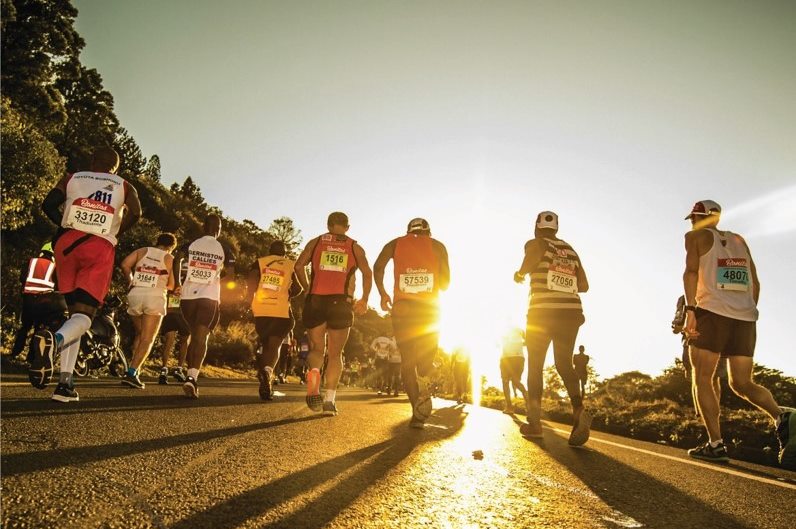 The #GOGREEN campaign – a waste management and anti-littering movement (a partnership between Old Mutual and WILDLANDS, supported by Polyco) was launched at the Old Mutual Two Oceans Marathon (OMTOM) in 2017. Similarly, the Comrades Marathon Association were inspired by the success of this campaign in Cape Town and implemented #GOGREEN along 27km of the 87km Comrades route in KwaZulu-Natal (KZN).

#GOGREEN was developed by WILDLANDS in partnership with Old Mutual aimed at providing a practical solution for collecting waste from athletes and spectators at endurance events, while discouraging littering and promoting upcycling and recycling.

All the waste collected from OMTOM and Comrades was sorted and baled for transportation to RWPA (Rural Waste Poverty Alleviation) Solutions’ headquarters – where it was transformed into Green Desks. The desks have been made possible through a partnership between WILDLANDS and Polyco (Polyolefin Recycling Company NPC). Polyco is a not-for-profit industry body which aims to create a society where litter is minimized and the value of waste is maximized, through facilitating the responsible management of used polyolefin packaging. Polyco is involved in supporting the mechanical recycling industry by funding collection, recycling, and new end-use growth projects.

A total of 667 desks (333 through OMTOM and 334 through the Comrades marathon) were committed by Polyco through these events and now the dream of rolling these out to underpriviledged schools in both the Western Cape and KwaZulu-Natal is a reality.

Polyco CEO, Mandy Naudé states “Polyco is very pleased to be part of the #GOGREEN Green Desks campaign, along with Old Mutual and WILDLANDS. This project is a perfect fit within our organisation in terms of finding new market end-uses for recycled polyolefin pellets or for difficult to recycle multi-layer materials. These desks are being made from 100% recycled material – predominantly polyolefin material, which is extremely durable and perfect for school desks. We look forward to a long association with this project in order to be able to assist to meet two key needs in our country – to clean up our environment and to provide the necessary desks to our schools.” 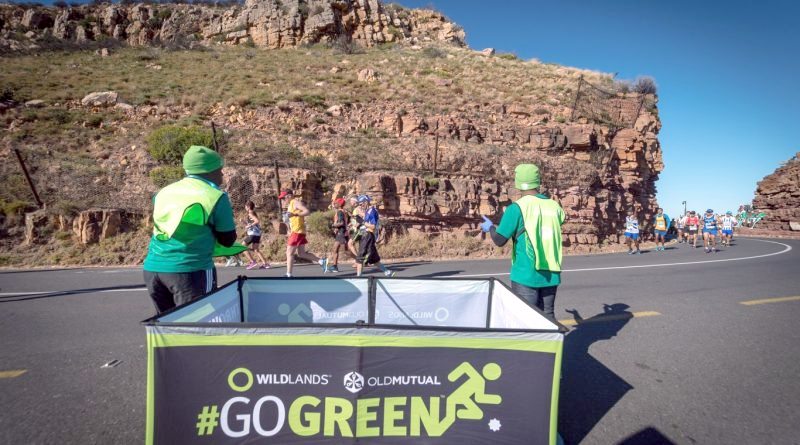 The #GOGREEN campaign was rolled out along the 56km route of the Old Mutual Two Oceans Marathon. Photo: Em Gatland

The schools which received the first of these Green Desks produced from the event waste were Axios School of Skills in Eerste Rivier (Cape Town) and Nobanda Primary School in Sweetwaters (Pietermaritzburg). Each school received 20 x double desks respectively for their classrooms. This was truly a momentous occasion for all involved.

“The Old Mutual Two Oceans Marathon has always worked hard to limit litter on its beautiful route to protect the environment,” says Carol Vosloo, General Manager of the Two Oceans Marathon non-profit company (NPC). “Over the last few years, the focus was to educate runners on the dangers of throwing plastics aside carelessly while always working to minimise waste at the same time. Now, thanks to the #GOGREEN campaign, we are also able to do something positive with the race waste as we continue our efforts to engage with runners and spectators on the perils of plastics. For the 2018 OMTOM event we have made provision for runners to use hydration packs, while only providing refreshments in cups on Chapman’s Peak.”

Comrades Marathon Association (CMA) Chairperson Cheryl Winn remarked, “It has been said that the greatest threat to our planet is the belief that someone else will save it, and at CMA we are mindful that the responsibility rests within each and every one of us. We are proud to be associated with the #GOGREEN Campaign and of our long-standing relationship with WILDLANDS as one of our Official Charities, and Old Mutual, both of which with whom we share vision and values. We applaud all the role-players involved in an inspired initiative which has the dual advantage of re-cycling waste and fulfilling a crucial need.”

An innovative path to responsible business

According to Marcelle Arnold, Old Mutual Marketing Executive, “One of the most exciting aspects of Old Mutual’s sponsorship of events like Comrades and OMTOM is that it allows us to be innovative and to connect with people in a direct and engaging way. Once again we are proud to be a part of the #GOGREEN campaign, which aligns strongly with our responsible business ethos to look after our environment and remain committed to the communities in which we operate.” 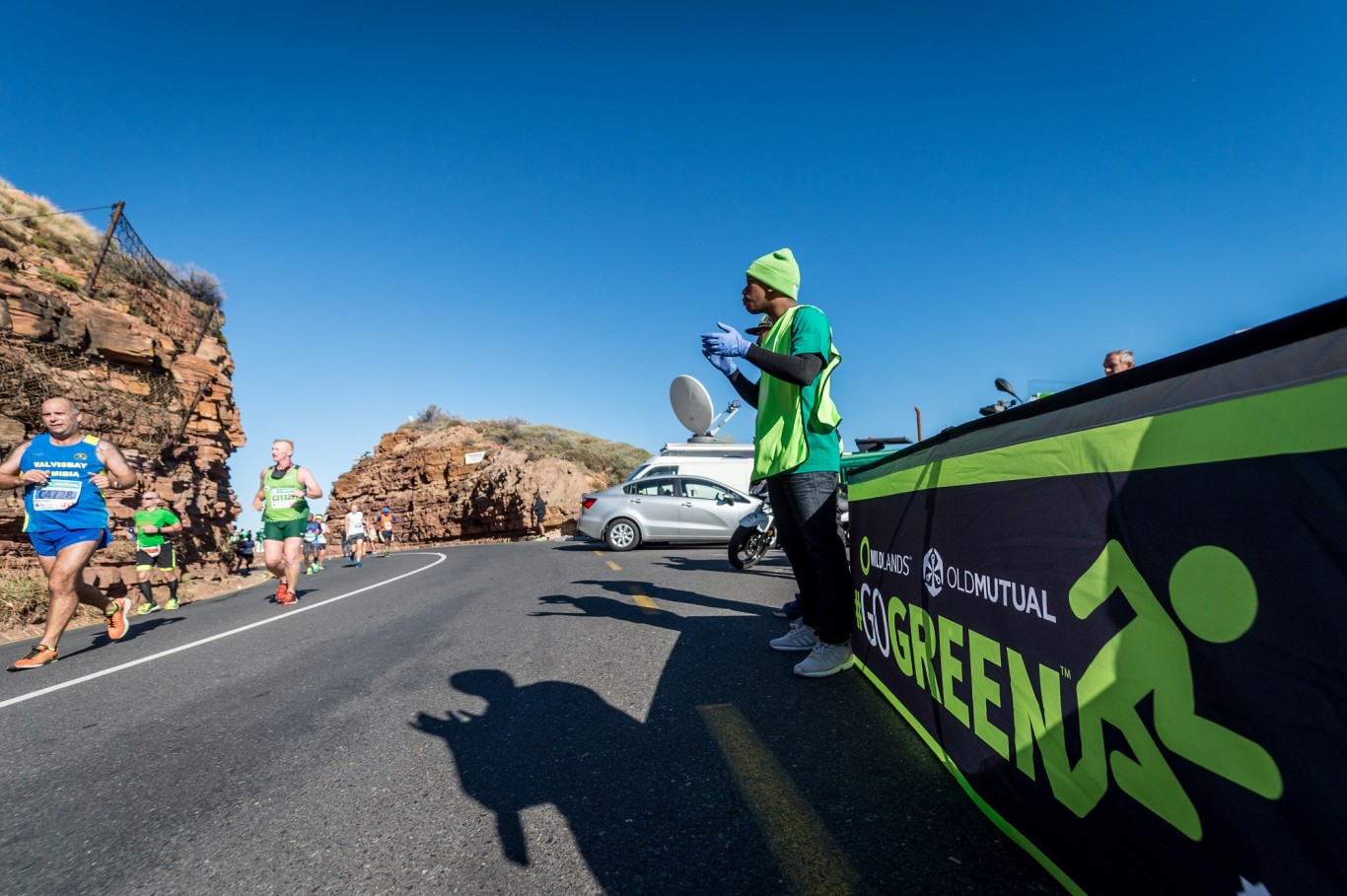 “It’s been an exciting journey being involved with such an innovative campaign. As the campaign driver and #GOGREEN ambassador runner, it has brought total satisfaction that I was not only part of the organising team but part of the solution. Seeing the happy smiles on the learners’ faces reassured me that WILDLANDS, together with its partners, has contributed towards addressing the shortage of 300,000 desks in South Africa, and in securing a brighter future for younger generations,” Buyi Makhoba-Dlamini, WILDLANDS Strategic Marketing Manager concluded.

More of these Green Desks will be rolled out in more than 40 KZN and Western Cape Schools concurrently throughout the month of February and March. Some of the schools in the Western Cape will include schools which were affected by the fires in Plettenberg Bay and Knsyna, as well as schools in Khayelitsha, Elsies River and Kalkfontein. In KZN, the schools included are based in Edendale, Copesville, Inchanga, Willowfontein and Imbali.

Further to the Green Desks provided to the schools, 5000 indigenous trees and plants will be planted at the schools. This is part of the Old Mutual and WILDLANDS commitment to creating sustainable futures for all South African learners. “Due to the current water crisis in the Cape, we will be planting water wise plants and succulents to mitigate the extreme drought we’re currently experiencing,” added Lesley Joemat, WILDLANDS Western Cape Projects Coordinator.

All trees planted in the KZN region are indigenous trees which were bartered with local Tree-preneurs.