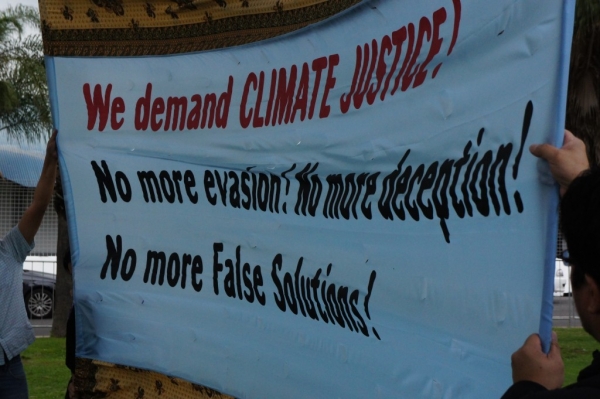 The United Nations Convention on Climate Change (UNFCCC) 17th Conference of the Parties (COP17) kicked off in Durban today with one resounding message, “It always seems impossible until it’s done.”

This Nelson Mandela quote has been repeated by numerous different high-profile climate change figures, such as Desmond Tutu and Christina Figueres. The question that needs to be asked though is, will it become an empty platitude, or will it resound through COP17 as we progress towards a fair, ambitious and binding (FAB) climate change deal?

Over 500 youth from across the globe came together for the UNFCCC Conference of the Youth (COY) to discuss climate change and the upcoming conference. Throughout COY there was an air of skepticism about the ability of politicians to take make COP17 a success. This sentiment was echoed by Kumi Naidoo, the executive Director of Greenpeace, when addressing the COY delegation. Naidoo advised them not to trust his generation, as they were the ones who had driven the planet to its perilous situation. The future, according to Naidoo, was up to us, and he called on the youth for a life-long commitment to the climate change movement. This sentiment resonated deeply with me and many other youth, many of whom had felt great disappointment in their leaders at previous COPs.

In the youth’s hands

If the future of the climate was indeed in the youth’s hands, then many of COY’s youth were confident that they would be the generation to make a difference. In a summary session, sentiments of confidence in the youth’s ability to be the change they wanted to see – to paraphrase Gandhi – were echoed around the room. I couldn’t help but be inspired by the energy, passion and shared vision of the youth, and wished they were the people in the negotiating rooms deciding our future.

Other exciting developments from COY included the formation of the South African Youth Climate Coalition from numerous different youth initiatives across the country. Their aim: to use the power and energy of the youth to tackle climate change, recognizing it as one of the greatest challenges of their time. Having been involved in the youth climate movement for a while, it was moving to see about one hundred South African youth coming together to take ownership of their future. Some of the very same youth sat in the Durban International Convention Centre (ICC) this morning and planned how they would go about using their voice to influence the climate negotiations, hopeful that they could make a difference.

Outside of the air-conditioned rooms of the ICC, the Occupy Movement gathered on a rough patch of grass in Durban Central to “occupy earth” and to discuss COP 17 and its failures. Pablo Solon, the previous Bolivian UN Ambassador, decried COP 17 as having the potential to lock us into an incredibly dangerous climate future if serious changes were not made. The general feeling from occupy discussions was that COP 17 was seemingly irrelevant for the majority of South Africans as most did not understand its significance, nor its link to the very real impacts it would have on their life.

The link between climate and social justice

Much needed to be done to draw the link between climate and social justice. An as close as possible to perfect, but tragic example, was provided the night before in Durban where six people died because of severe storms quite out of the ordinary for a Durban summer, which many attributed to climate change. On the ground at occupy much skepticism abounded as to potential progress within COP 17.

On the other end of the spectrum, the “We Have Faith” Caravan, which travelled from Nairobi to South Africa spreading the word about climate change issues across the continent, delivered a petition to South Africa’s International Relations Minister Maite Nkoana-Mahabane at an Interfaith Climate Rally at Kings Park Stadium yesterday. The aim of the petition was as optimistic as the group’s name, it called for world leaders to commit to a FAB agreement, for a renewal of the Kyoto Protocol and for funding to help Africa adapt to climate change.

In amongst these mixed feelings, the only thing that is clear within COP 17, as rumors circulate about Canada’s possible withdrawal from the Kyoto Protocol, is that the road ahead will be difficult. But, as Ambassador Jorge Argüello the Chair of the G77 and China said at the opening of the UN climate conference: “The challenges and difficulties of these negotiations cannot be faced with dismay and must not lead us to give up without a fight.” The “fight”, however, could go either way, so let’s hope that the We Have Faith Caravan’s faith is not unfounded.

Alex Lenferna is the lead tracker of the South African Government during COP 17 under adoptanegotiator.org, as well as chairperson of the South East African Climate Consortium Student Forum.