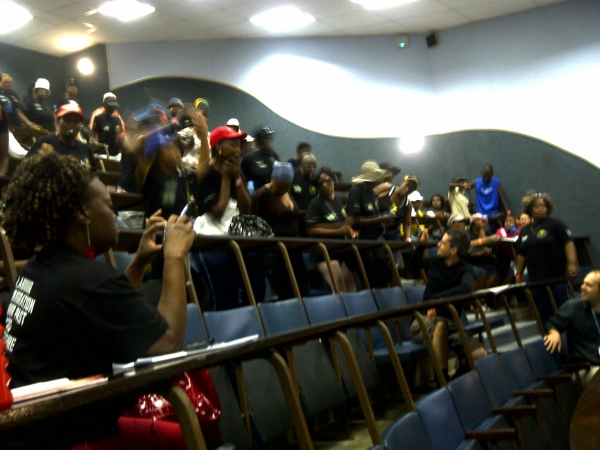 Friday, the 2nd of December Earth Life Africa held an anti-coal seminar at the Centre for Civil Society, University of KwaZulu-Natal (Howard campus).

The seminar titled “Anti-Coal Movements in Germany, South Africa and beyond?” highlighted many of the negative consequences associated with coal energy, and some of the concerns and desires in terms of climate change and energy.

The first speaker of the seminar, George Koessler (Counter Current Berlin), started his presentation by stating that “coal is evil”. Coal is a non-renewable energy source that can be used to produce electricity by means of combustion. This process, however, releases Carbon Dioxide (CO2) into the atmosphere. According to Koessler CO2 is a naturally occurring chemical compound – it can be found anywhere (air, water and ground) – but by removing the CO2 from the ground we are disrupting the natural balance of the environment.

In response to proposed climate solutions such as CO2 Capture and Storage (CCS) and Carbon Capture Utilization (CCU) solutions, Koessler commented that CCS is impossible, since “CO2 can never be put back in the ground”. He also declared that CCU processes are extremely expensive, and there is a greater superfluous of CO2 than what is being used for CCU processes.

“We will never keep quiet”

The second speaker, Mpatheleni Makaulule, is an indigenous leader of the Venda Community and the founder of Dzomo La Mupo (Voice of Nature). During her discussion she protests against the illegal mining operations of the Australian Mining Corporation Coal for Africa LTD near her village.  Makaulule argues that the organisation’s pursuit of the coal reserves is not only destroying sacred Venda forests, but is also threatening their water supply and their dependency on farming.

“We cannot eat coal, and we cannot drink coal. Coal is evil”, said Makaulule. She is persistent on protecting her community and their sacred sites saying: “We will never keep quiet”.

Laura Weis, a member of the Climate Justice Active Group in Berlin, was the third speaker. She centred her discussion on the energy situation in Germany. Weis stated that Germany shut down seven of the seventeen nuclear power stations in 2011 as a reaction to the events in Japan, but there are also 100 coal plants, and 27 new coal plants have been planned since 2007. Thus, the implementation of these plants will increase Germany’s CO2 emissions.

The final speaker, Makoma Lekalakala, is the Programme Officer of the Earthlife Africa Jhb. Lekalakala expressed her concerns regarding Eskom’s plans to improve the electricity shortage that South Africa has been facing. Eskom is set to build a new coal plant at Medupi in Northern Limpopo. The World Bank has already approved a $3 billion loan for the operation, but they have also reserved some funds for renewable energy, according to the Mail & Guardian (9 April 2010).  Even though there are many people who do not have access to electricity, and the fact that many South Africans who have access, have had to endure load shedding, Lekalakala is against the construction of the coal plant.

“Energy is part of our needs. We are here to demand energy, but we don’t want dirty energy”, says Lekalakala.

Lekalakala stated that the power shortages have convinced South Africans that they need more power plants, but they aren’t given all the information and they are not included in the decision making processes.

“That is why we react and we are not proactive.”, says Lekalakala.