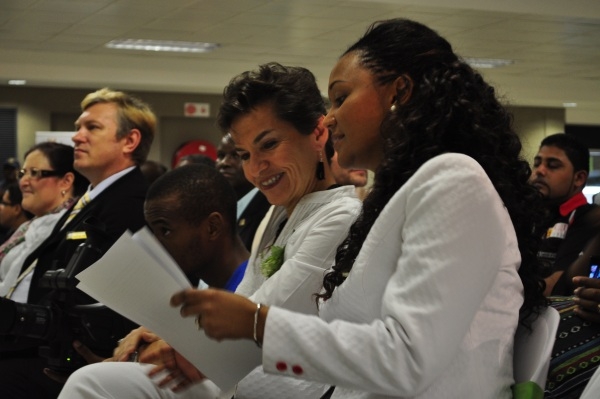 The COP17 Climate Train was today welcomed in Durban with a fanfare and a range of dignitaries Including National Framework Convention on Climate Change (UNFCCC) executive secretary Christiana Figueres and chief of the COP17 negotiations and EThekwini Speaker Rogie Naidoo.

Brass bands, Zulu dancers, diplomats, learners and prominent members of civil society rubbed shoulders on the platform to welcome the train and its team of workers and artists. They had crisscrossed South Africa in the last month to spread awareness to far-flung communities, who are often most vulnerable to climate change and its severe weather events.

Shortly before, Figueres told a gathering at the Station that the train was a unique concept in her experience of 16 previous UN Conferences of the Parties. Calling it a “fabulously brilliant idea”, the UN climate chief urged civil society in other countries to emulate the train outreach in order to “push” for a better world beyond the formal negotiations which commence in Durban tomorrow.

“We cannot stand still on the platform”, she said about the public. “Without pushing with the other wheel of the train (for the outcome wanted, little could be accomplished). We need to all to say what must be done for the future of our grandchildren. It is not only the responsibility of the negotiators.”

In both Durban and Pietermaritzburg, the public is welcome to join in the interactions between 09:00 and 17:00 every day – no reservations required.

About the COP17 Climate Train

Under the banner – Mobilization, Dialogue & Climate Justice – the Climate Train represents an unprecedented outreach programme. By Sunday it would have visited 17 towns engaging on people’s climate hopes, aspirations, experiences and solutions on climate change en route to Durban. The special vehicle and its environmental educationists and artists hosted women’s and youth groups, artists, learners and officials who are often disconnected from the big  debates and decisions, through art, tree planting, theatre, Earth Forums and round table discussions.

Indalo Yethu, the South African Environmental Agency, have joined forces with several partners to make possible this extensive awareness raising and engagement process through the Climate Train. The main partners are the Passenger Rail Agency of South Africa (PRASA), the Embassy of the Republic of Germany the British Council and COPART, with the support of the Department of Environmental Affairs, loveLife, the SA National Biodiversity Institute (SANBI) and the German Development Agency (GIZ).