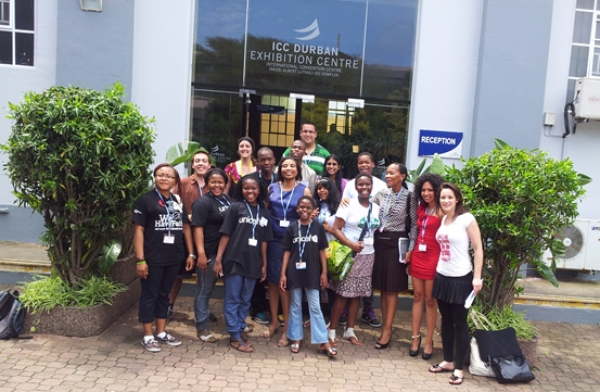 As countries such as the US, Canada, Russia and Japan push to delay agreement to a legally binding framework for climate change to 2020 – a delay which will likely push our ability to reduce climate change to 2 degrees Celsius out of our hands – it is either sadly ironic or apt (I can’t decide) that COP17 commemorated Youth and Future Generations Day today.

The focus of many of the commemorations was on the role that youth had to play in the future of climate change negotiations, and how climate change would affect both today’s youth and future generations.

But for future generations and today’s youth 2020 is too late. Thus while youth were thinking of their future, about 200 meters away, it was potentially being lost. Yesterday IPCC Chair R Pauchauri asked whether, “Those responsible for decisions in the field of climate change at the global level [will] listen to the voice of science and knowledge, which is now loud and clear?” A related question is will those responsible for those decisions be guided by their moral compass, taking into account the interests of future generations, or will they be guided by short-sighted narrow political interests?

we know what needs to be done

To quote Nelson Mandela, “we know what needs to be done – all that is missing is the will to do it.” The “it” would in this case be, among other things, an ambitious legally binding commitment long before 2020. So wasn’t the point of coming to COP 17 to do what needs to be done, to do “it”? In today’s contact group on Long-Term Cooperation, Small Island States, the Least Developed Countries, the EU, and the Climate Action Network (in accordance with the IEA) agree that 2020 is too late, that we need to do “it”. So why then are countries refusing to do what needs to be done – to secure or least increase the chances of a future free from severely dangerous anthropogenic interference in the climatic system? One of the major answers to this question seems to hinge on one simple word, trust, and a rather large lack thereof.

Considering statements, such as one from Canada, that they came to COP 17 with the intention to play hard ball with developing countries, it’s hardly surprising that trust is lacking. Furthermore given reports of the role that coal and oil industries are playing in shaping the negotiations trust seems to be an increasingly hard commodity to come by. Turning to the Kyoto Protocol and Canada for more sources of mistrust: Canada won Monday’s fossil of the day award for intending to withdraw from the Kyoto Protocol, and in doing so engaging in CMP discussions on the future of the Kyoto Protocol in bad faith. Of course some groups are trying to capitalize on the lack of trust in order to secure their own interests, and in the process sow more distrust.

In what could be described as an incredibly big and dangerous game of chicken, the US repeatedly claims that it will only take on emission reduction commitments when China does. This leaves China, the EU and other emerging economies to see whether they will take on US. However, China, India and Brazil are not yet willing to adopt legally binding commitments, and this leaves South Africa standing along in BASIC with a willingness to take on legally binding commitments – even if they are insufficient.

EU and SA have a big role to play

The EU and SA have a big role to play in this to shore up this divide and secure agreement. But, as a meeting with the G77 and China stated, before doing so there was issues of trust that they needed to resolve and more trust needed to be built up. And so instead of a global community (in the true sense of the word) “working together, saving tomorrow today” we are faced with a global negotiating process of conflicting short-term interests playing chicken and hardball with each other.

So perhaps one of the greatest lessons that young and future generations need to learn is how to build a global community based on mutual trust and a shared vision of a better world for all. But on young and future generations’ day, just a few days after the development of the South African Youth Climate Coalition (SAYCC), I found myself running around trying to put out political fires, as different camps within SAYCC tried to push forward seemingly different visions and political agendas. Much of the problem stemmed from miscommunication and misunderstanding, but some were quite real, and even among the South African youth of today seemingly working towards the same collective goal, trust and a sense of shared vision is hard to develop.

Of course it will take time, and it may never happen, but considering how this microcosmic political situation unfolded, it’s no surprise that the complex global community with such different interests and agendas – although all hopefully guided by the same overarching goal of global health – are still taking so long to establish a sense of trust and shared vision. Nonetheless this is their job, and so let us pray, hope and push for “it” – a new legally binding commitment to succeed the Kyoto Protocol before 2020. On the 2nd at 13h00 AOSIS ambassadors will rally for “it” at the General Assembly outside the ICC, perhaps you’ll join them?

So being a young person myself, as young and future generations’ day came to an end, it was clear that the day had indeed been a very significant one for young and future generations. A safe future for all teetered in the political balance, and much more work needed to be done to secure “it”. Perhaps it is worth reminding negotiators of a quote from a stirring speech delivered in today’s intergenerational tribunal by Mokgadi Seemola, a young South African from Limpopo, “We must focus more on the future, for the future is going to be where we will spend the rest of our lives.”