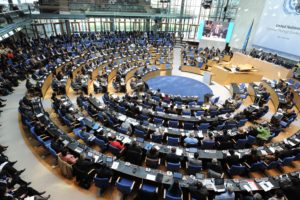 Climate change negotiators representing 200 countries yesterday kicked off the latest round of negotiations in what will be a make or break year for efforts to deliver a global agreement to tackle climate change at the Paris Summit in late 2015.

United Nations climate envoys met in Bonn, Germany for the first negotiating session of 2014 for the Durban Platform for Enhanced Action (ADP), the long-running talks that aim to deliver a new international agreement in 2015 that would then be finalised as a treaty in 2020.

However, the week-long talks began one hour later than planned yesterday morning, against a backdrop of continued political tensions over which nations should bear the most responsibility for cutting climate change.

Last week, China submitted a statement demanding rich countries set demanding new targets to slash their emissions by 40 per cent by 2020, based on 1990 levels. In the EU’s case, that would require a doubling of its current 20 per cent emissions reduction target for 2020. But with the European Commission currently proposing a new target to cut emissions by 40 per cent by 2030 – a full 10 years later than proposed by China – disagreements over the scale of various countries’ emissions reduction targets are set to continue.

Speaking on behalf of the group, Philippines Climate Envoy Yeb Sano warned that rich countries should not be allowed to “escape” from their climate change commitments.

He also called for the UN to establish more formal “contact groups” to ensure open discussions towards the 2015 deal.

Previous negotiations have been characterised by secretive talks between groups of countries, which have left many poorer nations feeling locked out of the negotiating process. For example, the Danish “alternative” text at crucial talks in Copenhagen in 2009 sparked fury among developing countries and was partly blamed for the world’s failure to agree a more ambitious deal at the high profile summit.

Ahead of this week’s talks, the Least Developed Countries (LDC) group also accused the UNFCCC parties of backtracking on their ambition to adopt strong measures to tackle climate change and said the Bonn meeting must start to deliver concrete action.

“We all have invested a lot of time and resources in this process and the efforts that we have put together for many years rightly deserve to achieve concrete outcomes that can effectively address this urgent issue of global warming,” said Prakash Mathema, chair of the LDCs. “Any delay in global climate action will lead to greater adverse effects, increased needs for adaptation as well as more serious residual and permanent loss and damage in the least developed countries – and other vulnerable countries. The most rational way to move ahead is to acknowledge the scientific evidence and act accordingly. That evidence tells us we must act fast.”

A crucial year for climate ambition

With all eyes on Paris in 2015, UN climate change chief Christiana Figueres has marked 2014 as a crucial year during which countries will be required to work out exactly how ambitious they are prepared to be in any 2015 deal.

“We’re on a very straight path towards the 2015 agreement of Paris,” she told reporters in London last week. “And at the same time, I have been warning everybody now for quite a few months that we have to keep our focus and vision on 2014, which will be the year in which most of the work needs to be done.”

She added that diplomats were now aiming to draw up a draft agreement by the next UN Climate Summit in Lima, Peru at the end of this year, and potentially even before the UN Secretary General’s world leaders’ summit on climate change in September later this year.

“On Monday they will start working on what is the structure and the logic that is going to underpin the agreement with the intent of fleshing that out throughout the year and having a first draft of the 2015 agreement available to them for discussion and review in Lima,” she said.

Throughout the rest of the week, diplomats are expected to focus their attention on the role that renewable energy and energy efficiency can play in driving down emissions – the theme of the latest talks.

However, the conference is also likely to be marked by further disagreements between different groups of countries about who should bear the responsibility of making cuts and the ongoing failure to mobilise the scale of investment and funding needed to deliver climate adaptation measures and emission reductions in poorer nations.