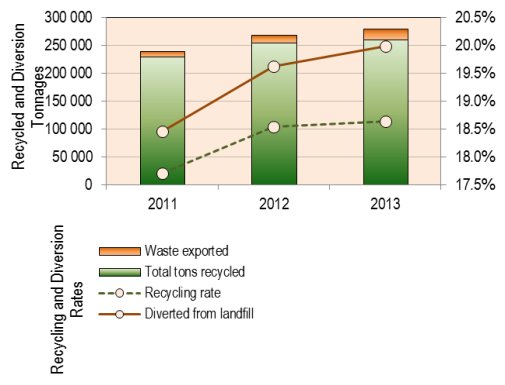 No less than 280 000 ton of plastic was recycled and diverted from landfill last year. That is 20 % of all plastics manufactured in South Africa. Results were released during Clean-Up and Recycle SA week.

This equates to a 4.1 % increase on the previous year’s figures. Of all the recycled plastic, 220 400 tons were derived from packaging, resulting in a year on year increase of 8.9 %. Hence 30.1% of all plastic packaging was recycled.

“We were hoping to see more impressive increases in the latest recycling results, but the economic down-turn in the economy during 2013 had a direct impact on both the quantity and quality of plastic packaging that was available for recycling,” says Anton Hanekom, Executive Director of Plastics|SA – the mouthpiece of the South African Plastics industry.

According to Hanekom, both recyclers and converters agreed that shoppers spent less money on consumer items during the reporting period, resulting in fewer recyclables entering the waste stream. At the same time, the exchange rate favoured exports, seeing a total amount of 18 920 tons of waste plastics exported during 2013 to be recycled elsewhere, instead of being used to the advantage of the local industry and economy.

“Due to the shortage of plastics collected from households or businesses, recyclers were forced to source larger quantities of recyclables from landfills and other post-consumer sources; 66 % compared to the 59 % in 2012,” Plastics|SA reported.
Recyclers are still of the opinion that the largest growth in recycling would be in post-consumer recyclables during the next few years.

Collectors handle 60kg of plastics per person per day

The formal employment in plastics recycling decreased by 10.6 % to 4 510 formal jobs since 2012. Of these, only 7.7 % were contract workers – those are workers who were full time involved in the sorting of incoming materials for the recyclers, normally on site. These workers are paid for their output rather than for the time spent on the job.

At the same time, approximately 43 500 informal jobs were created in the collection industry. These collectors collect all recyclable materials and are not only limited to plastics. The figures are based on 60 kg of plastic waste handled per person per day and 200 good collection days per annum.

“We are glad to see that recycling and sorting companies invested in training and on-the-job skills enhancement to improve the productivity of their labour forces. They also invested in new and more efficient equipment installed at their premises,” Hanekom commented. As a result, there was a 15 % increase in the tonnages processed per employee in the formal recycling industry over the last year.

The industry is growing

Zero plastics to landfill by 2030

The South African plastics industry recently announced its Zero Plastics to Landfill by 2030 objective, and is engaging with all levels of government to achieve this target. Looking at the latest figures of the total tonnages of plastics that were effectively diverted from landfill, however, it is clear that we still have a long way to go.

The European plastics industry has stated that the maximum economic recycling rate for plastics is about 35 %. South Africa, however, has a number of things in its favour that will allow us to exceed that number. Not only do we have the availability of cheaper sorters, we also have a dynamic and inventive recycling industry that can hold its own and develop its own end markets for recycled materials. One example is the recycling of thin films, where South Africa is far ahead of our European counterparts. Similarly, we are also developing a stronger non-packaging recycling industry for the polyolefins.

South Africa should be able to reach a 40 % mechanical recycling rate if the following provisions are in place:

“The South African consumers need to realize that they have an important role to play by separating their domestic waste into recyclables and non-recyclables at home, therefore at source). Higher recycling rates influence and benefit all levels of society. It creates more jobs, it results in a cleaner country and it contributes to a lesser carbon footprint,” concludes Hanekom.