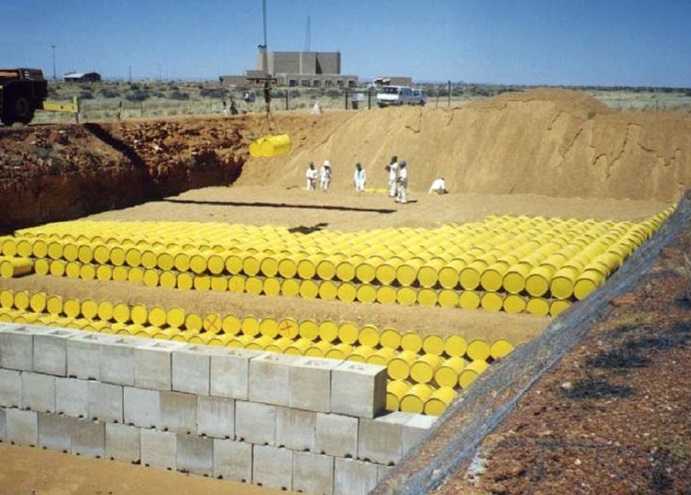 Vaalputs is the only South African radioactive waste-disposal facility. Operated by NECSA, the facility is located about 100 km south-east of Springbok in the Northern Cape.

Did you know that the National Energy Corporation of SA (NECSA) has permission to smelt and release radio active metal into the South Africa marketplace?

Last week a court action was launched to call for a halt of  the operations at Pelindaba (just outside Tshwane), and a new process for authorisation to commence.

According to papers filed in court this week, the test smelter and a further two induction smelters were constructed (and are perhaps already operational) after the approval period for them by the Department of Environment Affairs had lapsed.

One of the respondents is also the National Nuclear Regulator, who appears to have simply gone with the recommendation of the NECSA that smelting the metal is the best (and only) option.

International Best Practice for the material they wish to smelt is a technique called encapsulation and above ground, monitored storage, to avoid risk to people and planet. NECSA’s plans mean if they go ahead, that any ‘recycled’ metal in South Africa could be radioactive as residual radioactivity in it cannot be fully guaranteed.

A key concern is the inability of current technology to ensure the containment of what is called “fugitive emissions”, emissions released as part of the operation. This has not been demonstrated anywhere in the world, said EarthLife Africa (ELA). “Further, it is a grave concern that both NECSA and the NNR are willing to proceed with the smelter plants, ” said ELA.

It is believed that the smelters (not refuted by the NECSA) are actually intended in the longer-term for ‘commercial operations’ i.e. the importation of radioactive waste for smelting and release into the SA market, turning the country into an international nuclear dumping ground.

“It is highly problematic when the National Nuclear Regulator is mainly funded by the nuclear industry,” said Judith Taylor of Earthlife Africa Joburg, “and no attempt is made to take on board new and important research into the hazards of radiation, even at small or so-called ‘low’ doses.”

Unions should be deeply concerned

Adequate and transparent scrutiny should be a critical prerequisite prior to the authorisation and licensing of operations in which all available and known research is thoroughly and transparently examined. This has not been the case with these smelters – despite volumes of research presented by lay Interested & Affected Parties (I&APs). To date there has been not a single attempt made by the NNR or NECSA to address concerns presented in this research, or to show that independent research has been deployed by them to objectively consider this body of evidence, or to present any findings that further expert investigations have been undertaken by the respondents in this regard.

“Unions such as NUMSA should be deeply concerned about this. It is their workers who will be the first in line,” said Muna Lakhani of Earthlife Africa Cape Town. “The next in the firing line are ordinary people like you and I, as absolutely any metal product could land up in our homes, schools and places of work that are radioactive in so-called hotspots, where radiation concentrates. Imagine a toy or chair or bed being radioactive?”

No credible proof of profitability

The nuclear industry has been unable to produce credible proof that it is able to operate profitably – the industry is subsidised (just by the Dept of Energy alone) by more than R700 million annually, as presented in Parliament on the 1st of July 2014. Annual budget reports to Parliamentary Committees consistently note both NECSA and the NNR’s funding constraints, among them tight maintenance budgets.

Thus the applicants contend that concerns regarding any cost-cutting endeavours to justify the smelter project as a profit-making enterprise necessitates scrupulous inquiry which is not evident.

(In other words – they are trying to show the profitability of such endeavours at huge risk to public health and, in the long run, to the Treasury).

To avoid public liability, which is another major unresolved issue of its own, it can be presumed the extent of public health impact will be more difficult to determine reliably. Despite this potential economic impact (on public liabilities and third party insurances even from day-to-day operations) on NECSA/govt could be considerable.

In the event of explosions or accidents, of which there is evidence of happening globally, the impact could be catastrophic. So the long-term impact must be considered, as well as the ethics of short-term economic gratification –for NECSA, turning nuclear waste into a profitable enterprise, and for the NNR which will rake in licensing fees.

No plan for liabilities or health implications

There is no plan for liabilities to be adequately covered, as further evidenced the long-standing battle of ex-workers to receive compensation, as well as any health implications of releasing radioactive metal into the market.

The smelter option was simply chosen by the proponent as the preferred option, without releasing any evidence as to why this may be so. Safer options are also not considered, nor any attempt made to look at external costs of the various options.

At the very least, the court action is designed to force the authorisation process to be properly re-evaluated. It is also the responsibility of NECSA and particularly the NNR to ensure that all surrounding populations and residents are fully informed in a balanced extensive public awareness effort of all related information and their constitutional rights in terms of the applications process.