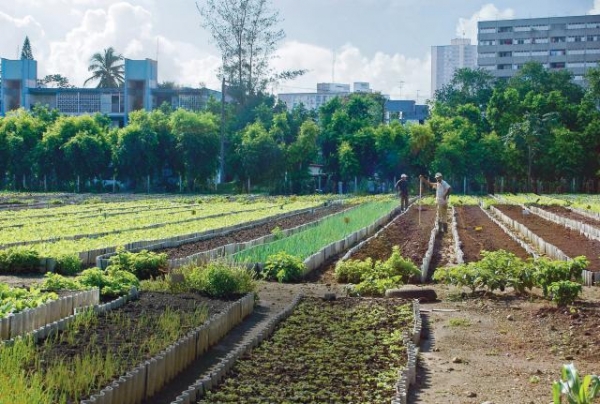 Cuba’s successful models of sustainable development — in areas of food, housing and health — are now being widely replicated throughout Latin America.

Cuba marked the 50th anniversary of its revolution in 2009. The Cuban people have withstood five decades of hostility from the United States and its international allies.

However, Cuba’s best form of resistance has been not just the assertion of national sovereignty, but the creation of an alternative model of development that places ecology and humanity at its core.

Applying the yardsticks of conventional economics to assess Cuban society (for example focusing on disposable income, gross domestic product or levels of consumption) commentators often conclude that the revolution has failed to pull the Cuban people out of poverty.

food, healthcare & education for all

But such criticism omits the facts that: the Cuban state guarantees every citizen a basic food supply; most incomes are not taxed; most people own their own homes or pay very little rent; utility bills, transport and medicine costs are symbolic; and the opera, cinema and ballet are cheap for all.

High-quality education and healthcare are free.

These provisions are part of the material wealth of Cuba and cannot be dismissed — as if individual consumption of DVDs and digital cameras were the only measure of economic growth.

An example to the world

It is no mere coincidence that Cuba is the only country in the world, according to the World Wildlife Fund’s 2006 Living Planet report, to have achieved sustainable development (measured as the improvement of the quality of human life while living within the carrying capacity of its ecosystem).

The collapse of the former Soviet bloc between 1989 and 1991 led to a collapse in Cuba’s foreign trade in a context of the crippling economic blockade maintained on Cuba by the US since 1960.

GDP plummeted 35% by 1993 and there were critical scarcities of hydrocarbon energy resources, fertilisers, food imports, medicines, cement, equipment and resources in every sector.

Cuba was forced to search for domestic solutions.

In agriculture, organic fertilisers and pesticides, crop-rotation techniques and organic urban gardens were developed. Tractors were replaced with human and animal labour.

Bikes were imported from China and car-pooling was established. As the economy improved, Cuba extended environmentally sustainable measures, introducing ecotourism and solar energy.

Economic reforms were introduced, including concessions to the “free market”. But free universal welfare provision, state planning and the predominance of state property were maintained.

Incredibly, given the severity of the crisis, between 1990 and 2003, the number of Cuban doctors increased by 76%, dentists by 46% and nurses by 16%. The number of maternity homes rose by 86%, day-care centres for older people by 107% and homes for people with disabilities by 47%.

Infant mortality fell and life expectancy rose. Internationalist links also increased, as thousands of Cuban specialists, including healthcare professionals and educators, volunteered to work in poor communities around the world. By November 2008, Cuba had nearly 30,000 doctors and other health professionals working in 75 countries, providing healthcare and training locals.

Its literacy programme has taught more than 3,600,000 people from 23 countries to read and write.

2006 dawned as the Year of the Energy Revolution in Cuba, a major state initiative to save and rationalise the use of energy resources: install efficient new power generators, experiment with renewable energy and replace old durable goods (refrigerators, televisions and cookers) with new energy-saving equipment.

Ten million energy-saving light bulbs and over six million electric rice cookers and pressure cookers were distributed free of charge. The aim was to raise the island’s capacity for electricity generation and save the government millions of pesos formerly spent on subsidised fuel.

State subsidies mean energy consumption is not rationed through the market, so energy efficiency, not price hikes, is the principal means of reducing consumption.

Building on the campaign for energy efficiency, in 2008 Cuba launched a campaign to increase food production. Following the closure of many sugar mills, in 2007 up to 50% of Cuba’s arable land lay fallow, while over 80% of the food ration was imported. The international rise in food and fuel prices meant the cost of Cuba’s imports rose by $1 billion from 2007 to 2008.

Now, idle land is being distributed in through rent-free loans to those who want to produce organic food.

Already organic urban farms in Havana supply 100% of the city’s consumption needs in fruit and vegetables. They are supplemented by urban patios, of which there are over 60,000 in Havana alone.

Sinan Koont of the Department of Latin American Studies at Dickinson College, Pennsylvania, said in a January 2009 Monthly Review article: “It is not just about economics, producing food and creating employment. It is also about community development and preserving and improving the environment, bringing a healthier way of life to the cities.”

Central to understanding these achievements is the role of the state in Cuba.

Critics who point to the absence of multi-party elections and “civil society” in Cuba fail to appreciate how the island’s alternative grassroots system of participative democracy ensures the state is representative of its population and acts in their collective interests.

Under capitalism, private businesses regard the Earth’s natural resources as a “free gift” to capital. The need for sustainable development creates an irreconcilable contradiction under capitalism because it implies obstruction of the profit motive that drives capitalist production.

In December 2004, Cuba and Venezuela formalised their alliance with the formation of the Bolivarian Alliance for the Americas (ALBA). Between 2006 and 2009, Bolivia, Nicaragua, Dominica, Honduras (under Zelaya), Ecuador, St Vincent and the Grenadines, and Antigua and Barbuda joined ALBA, turning it into a political and trading bloc of significance.

Members are engaged in projects of humanitarian, economic and social cooperation through non-market, non-profit-based exchanges.

Free from the world

The Bank of ALBA was launched in December 2008 with US$2 billion capital, operating without loan conditions and functioning on the basis of members’ consensus. It contributes to freeing countries from the dictates of the World Bank and the International Monetary Fund.

In January 2010, a new currency for exchanges within ALBA (the “sucre”) was introduced, undermining the leverage of the US dollar.

ALBA is the fruit of Cuba’s internationalist, welfare-based development model. It is also the expression of pan-Latin American integrationist movements and the ascendancy of social movements representing the interests of the indigenous and poor communities.

These sectors demand rational development strategies that respect their traditions and environment.

Capitalism a threat to life

The April 2009 ALBA declaration “Capitalism Threatens Life on the Planet” said: “The global economic crisis, climate change, the food crisis and the energy crisis are the result of the decay of capitalism, which threatens to end life and the planet.

“To avert this outcome, it is necessary to develop and model an alternative to the capitalist system. A system based on solidarity not competition; a system in harmony with Mother Earth and not plundering of human resources.”

The Cuban Revolution is a living example, with increasing relevance, showing it is possible to live with dignity and sustainably outside of the capitalist profit motive, with human welfare and the environment at the centre of development.

It is a lesson we must learn urgently because, in the words of former Cuban president Fidel Castro at his speech at the 1992 Earth Summit, “Tomorrow will be too late”.

Helen is the author of Che Guevara: The Economics of Revolution, published by Palgrave Macmillan in 2009, and is a Latin American history teaching fellow at University College London and the London School of Economics.