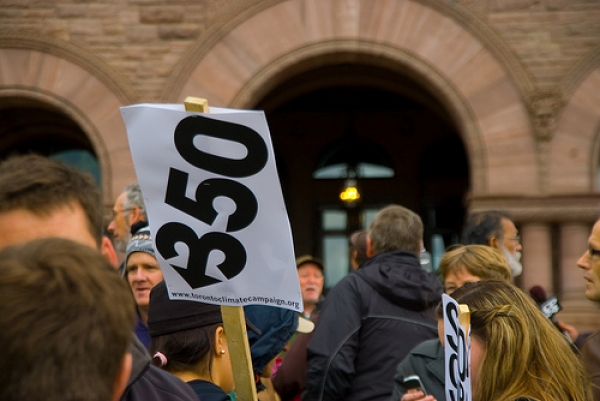 350.org is an international environmental organization, with the goal of cutting atmospheric carbon dioxide emissions to 80% by 2050. The current level is 389 ppm of CO2. The pre-industrial revolution level was 278 ppm. In 1988 the earth’s atmosphere surpassed the 350 ppm mark. Image: Tom Cochrane.

Let’s jump right into this. If CO2 had significant commercial value, that is, it was used extensively by industry for a large number of purposes, then fossil fuel power plant operators might be easily convinced that capturing and selling the greenhouse gas would make more sense than letting it go into the atmosphere: If there were profits in smoke stack CO2, then they wouldn’t let it go up in, well, smoke.

The list industrial uses for CO2 from power plants, and other sources, keeps growing. It can be pumped down oil wells to push out more oil. It has been used (outside the US) to put the fizz in fizzy drinks. It can be pumped into greenhouses to increase plant growth. It has been used as a refrigerant in cooling equipment. There are certainly others.

Compared with another weight-saver, aluminum, plastic is surprisingly heavy stuff. Cars and light trucks have lots of plastic parts. Lightening up plastic parts will lighten a vehicle for better fuel economy and less CO2 emissions.

For its new Ford Escape, Ford is using a process called MuCell (R) to make the SUV’s instrument panel structure. With MuCell highly controlled CO2 or nitrogen is used in the injection-molding process to create a uniform microcellular material structure. The MuCell instrument panel with its micron-sized bubbles is about a pound lighter than if it was made with conventional plastic and solid injection molding. A pound doesn’t sound like much, but if many other car parts were made of MuCell plastic, overall weight savings would be significant.

MuCell offers additional savings as well. Molding cycle time is reduced by 15 percent. Molding clamp tonnage is reduced by 45 percent saving production process energy. And, to make bean counters and top brass at Ford happy, MuCell saves Ford an estimated $3 per instrument panel. That’s no chump change. In 2010 Ford sold over 190,000 Escapes. Do the math. That’s over $570,000 just for adding some bubbles to one piece of plastic. Those bubbles could be power plant-derived CO2 that was, in a sense, being sequestered in dashboards.

The MuCell process has already been used successfully in Ford vehicles in Europe for valve covers, along with heating, ventilating and air conditioning (HVAC) system parts. Ford is planning other MuCell parts for the future which will help improve fuel economy, reduce energy consumption in manufacturing and help increase the company’s bottom line.

One issue with carbon dioxide-bubbled MuCell plastics would be in the eventual recycling of the plastic parts. Either melted down or ground into shreds CO2 could feasibly be released reversing some of the CO2 reductions made by the first place.

MuCell was invented by MIT, and subsequently acquired by Trexel in 1995, the MuCell process was initially created for development and commercial use in the injection molding industry worldwide. Trexel lists many examples of currently produced MuCell plastic parts in its website.

And now for something completely different.

There’s an abundance of natural gas on the planet. Hydraulic fracturing, or ”fracking” with its concerns, has increased supplies dramatically. Natural gas is considered a cleaner, lower carbon, alternative to burning coal for power generation, but it won’t last forever and will eventually decline. Further, even though CO2 emissions from burning natural gas are less than coal, a greater use of use natural gas combined with economic and population growth will eventually make this so-called clean fuel a greenhouse gas problem.

Cutting down on CO2 emissions

One way to cut down on CO2 emissions from natural gas, while extending its supply, is to blend biomethane into natural gas pipelines. Natural gas is mostly methane. Biomethane, made from decomposing bio-feedstocks is considered carbon-neutral since those feedstocks are regrown, recapturing carbon dioxide in the same amount released when biomaterial decomposes.

HyperSolar, of Santa Barbara, California, has a plan. It wants to “manufacture” natural gas using its own recipe of solar energy, proprietary nanoparticles, waste water and carbon dioxide.

At the heart of our breakthrough technology is a functional nanoparticle that serves as a self-contained photoelectrochemical system that contains a solar absorber, encapsulated in a protective shell, which creates an electric charge upon absorbing a photon that then drives the chemical reactions at the cathode and anode. By changing the composition of the solar absorber, cathode and anode, we can “program” our nanoparticles to react with different kinds wastewater streams.

For almost a century, scientists have tried and failed to “split water” cost effectively to produce hydrogen and oxygen. Our process does not produce oxygen (O2), which has no significant value and is an expensive and slow reaction. Unlike conventional electrolysis, where hydrogen and oxygen atoms are completely disassociated using a large voltage, we designed our reactions to use a very small voltage and only produce hydrogen (H2). By elegantly engineering the reaction kinetics toward H2 generation in conjunction with wastewater, our nanoparticles function as one-way machines that detoxify wastewater, and produce clean water and pure hydrogen in the presence of sunlight. No other energy source is required, making this an extremely economical and commercially viable approach to hydrogen production.

The hydrogen gas generated in the solution can then be easily reacted with CO2 gas injected into the solution to produce methane under a well-known reaction called the Sabatier reaction.

Unlike other approaches to hydrogen and methane production that may require high temperature and high-pressure systems, our reactions are designed to occur at normal pressure and temperature. This allows our reactor to be very low cost and very simple, such as a glass vessel or even clear plastic bag. To achieve world scale operation, we envision acres of very inexpensive reactors installed on vacant, nonproductive land, producing massive amounts of carbon neutral methane that can be piped into the existing natural gas infrastructure for everyday use in homes, power plants, factories, and vehicles. Additionally, the valuable byproducts extracted from wastewater can be sold in the global chemical market to further reduce the production cost of renewable natural gas.

That aforementioned carbon dioxide could come from power plants including natural gas fired operations thus reducing their emissions even further.

Currently the battle against rising CO2 levels in the atmosphere includes plans for carbon sequestration or reducing emissions altogether by employing low-carbon or no-carbon energy sources.

Another alternative would be to put power plant sourced CO2 to work. If there’s money to be made by selling waste CO2, youbetcha fossil-fueled power plant operators would quickly find a cheap way to capture and sell their own exhaust.