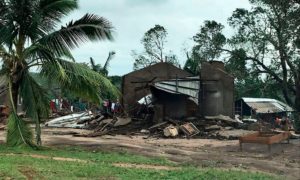 The destruction caused by Cyclone Kenneth, the strongest storm on record to hit Mozambique, may require another massive aid effort in a country still reeling from the year’s first tropical cyclone, the UN has said.

With high winds and torrential rain, Kenneth made landfall in the country’s north on Thursday night, five weeks after Cyclone Idai devastated its centre.