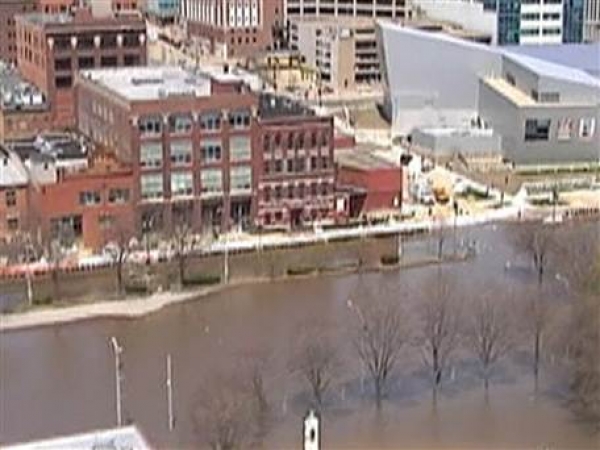 Approaching storms are causing residents in the Midwest and along the Mississippi River to beef up makeshift levees. Illinois is expected to have record crests from the storms.

Rivers including the Mississippi and Illinois are expected to remain in “major flood stage” through this weekend, the National Weather Service warned as rain and snow continued to fall on much of the central U.S. Tuesday.

A number of flood warnings were in place as ongoing rain and runoff from last week’s intense downpours continued to keep the water levels high in rivers across Illinois, Missouri, Iowa, Indiana and Michigan in particular, the NWS added.

“The larger rivers, such as the Mississippi and Illinois Rivers, will take longer to recede and will remain in major flood stage through this weekend,” the weather service said.

2 Feet of water carries vehicles away

“Do not drive through flowing water. Nearly half of all flood fatalities are vehicle related. As little as 6 inches of water may cause you to lose control of your vehicle. Two feet of water will carry most vehicles away,” it added in a flood warning for several rivers in Missouri.

There were some heavy snowfalls overnight in parts of the central U.S. and snow was continuing to fall Tuesday morning but was expected to gradually diminish, the weather service said.

The worst-affected area was expected to be the foothills and eastern slopes of the Front Range Mountains, which could see up to 16 inches.

Duluth, Minn., has this month seen a record total of 50.2 inches for any month of the year, weather.com said. The figures go back to 1870.

The weather service warned that in areas where the snow was wet, travel would be “especially hazardous.”

A risk of severe storms

There was also a risk of severe storms from the Ohio Valley to the lower Mississippi Valley, weather.com said on Tuesday, with “localized damaging winds and large hail.”

The floods have been blamed for at least five deaths since Thursday and have also forced evacuations, swamped homes and shut down bridges.

Barge traffic on the Mississippi was brought to a near standstill. On Sunday at least one sank and others ran aground or were half-submerged because of the floods.

States of emergency have been declared in Missouri and Illinois.

In Grafton, Ill. – about 40 miles northeast of St. Louis – Mayor Tom Thompson said his small community along the Mississippi River was managing, despite the water reaching 10 feet above flood stage by Monday afternoon.

“If it gets another foot (higher), it’s going to become another issue,” Thompson said, reported The Associated Press. Many businesses “are kinda watching and holding their breath… Some things are going to really be close to the wire.”

Meanwhile, smaller rivers were causing big evacuations elsewhere. In Grand Rapids, Mich., the Grand River rose to a record 21.85 feet, The AP reported, driving hundreds of residents outs of their homes and flooding parts of downtown. Prison inmates were bused in to work alongside the National Guard and volunteers to build a floodwall of sand and gravel in Clarksville, Mo., but the barrier was showing signs of strain on Monday, according to The AP.

Areas south of St. Louis are not expected to crest until late this week.

Approaching storms are causing residents in the Midwest and along the Mississippi River to beef up makeshift levees. Illinois is expected to have record crests from the storms.