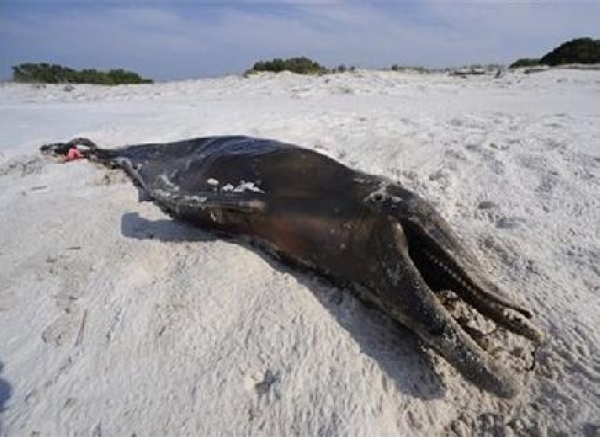 A dead dolphin, another casualty of the epic oil spill. Image: Center For Biological Diversity

Here is an update on the continuing oil-spilling disaster in the Gulf of Mexico by the Center for Biological Diversity.

Oil has landed on several small islands known as the Chandeleur Islands on the Louisiana coast, including areas of the Breton National Wildlife Refuge. Oil covered gannets and brown pelicans have been found and the refuge was closed to the public for safety reasons. The area provides key nesting and migratory stopover habitat for thousands of birds, as well as important fishery habitat. Tar balls have also washed up on Alabama’s white sandy beaches of Dauphin Island. Some of the oily foam, a mixture of oil, water, and dispersants, is also washing up near the Mississippi delta. The stench of crude permeates coastal areas, where it is causing headaches, burning eyes, and nausea among the people who live there. Meanwhile, a ban on fishing continues as the oil continues to seep into the Gulf.

Controlled in situ burns of the oil slick have spewed fire and massive amounts of carbon dioxide into the atmosphere. Click here for a Navy video of the scene.

Plugging one of the three leaks in BP’s crumpled pipeline has failed to slow the gush of oil, and BP’s next-best hope of drilling an adjacent well to relieve the pressure from the damaged well, so it can be capped, is at least 90 days away. BP attempted to contain the spill with a giant steel box placed over the leaks, but in the deep waters a mile below the surface the dome has  frozen gas hydrates clogged the funnel. Efforts to solve the problem continue, but the dome has been set aside for a few days.

Other fixes in the works include: using a smaller containment box, shooting debris such as tires and golf balls into the well, or cutting the leaking pipe and putting larger pipe like a straw over it. These are all untested and risky solutions and some of them also have the potential to increase the flow of oil. In the meantime, controlled burns of the oil on the surface have belched fire and smoke into the atmosphere.

How fast is it spreading?

The surface oil slick covers an area of approximately 4,500 square miles (about the size of Connecticut). It appears to be circulating counterclockwise; oil continues to gush unchecked into the seas below. It’s expanding toward the Mississippi Delta, and there’s a large patch of oil that has moved west near Port Fourchon.

If the spill continues to grow at the current pace, it’s likely to reach the Gulf Stream. This will whisk the oil into the Florida Keys, around the tip of Florida, and into the Atlantic Ocean. From there, it could begin fouling Atlantic Coast beaches, bays, and coral reefs. Some predict that some small oil filaments may have already reached eddies on the cusp of the Gulf Stream.

BP is flooding the surface and deep ocean with hundreds of thousands of gallons of toxic chemical ‘dispersants’ in a desperate attempt to keep the visible surface slick in check. Dispersants, which scientists agree are toxic where they’re applied, have never been pumped into a marine ecosystem in such enormous volumes or at such depths. These chemicals bind with oil droplets so that they sink and become ‘dispersed’ by currents.

What species are threatened?

The BP oil spill threatens some of the most productive – and fragile – marine ecosystems in the United States. About 25 percent of the nation’s wetlands lie in the Mississippi River Delta, providing habitat for nesting seabirds and resting migratory birds. The Gulf itself is home to dozens of threatened and endangered species, as well as commercially important fish, crab, and shrimp that provide much of the basis of the Gulf Coast economy. While the response to the oil spill has largely focused on stopping oil from reaching shore, the offshore ecosystem, from plankton to dolphins, will suffer devastating impacts.

An endangered sperm whale and several striped dolphins have already been spotted passing through the giant slick, which, on May 7, hit critical habitat for the federally protected piping plover on the Chandeleur Islands. On May 9, the Coast Guard reported dead birds and porpoises onshore, but further investigation is needed to determine if they were victims of the oil spill. Oiled gannets and brown pelicans were the first victims discovered by response teams, and some recovered birds were released on May 10. The Coast Guard reports that 18 birds, 87 sea turtles, and six dolphins have been found dead, although it has yet to confirm whether the deaths are oil related. 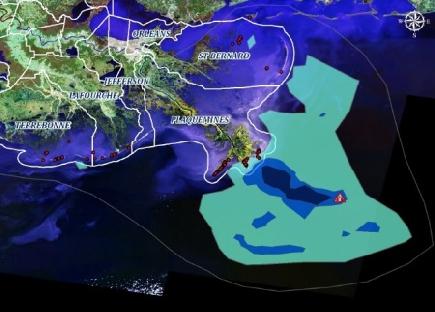 The timing of the spill could not have been worse. Imperiled species including the Atlantic bluefin tuna, Kemp’s ridley sea turtles, loggerhead sea turtles, piping plovers, and sperm whales are flocking to the Gulf right now to spawn, migrate, and feed. For many of them, there’s nowhere else to go.

The state of Louisiana has identified 210 birds, reptiles, amphibians, and mammals likely to be affected by the spill, including about a dozen threatened and endangered species. Another 445 fish and invertebrate species will also be impacted. No estimate exists yet as to the number of corals and plants such as sea grass and wetland vegetation likely to be covered in oil.

Numerous species of seabirds, dolphins, and sea turtles have been spotted struggling through the oily muck. Dead seabirds, including gannets and brown pelicans; jellyfish and fish have already started washing up on the shores of Louisiana, Mississippi, and Alabama. Shoals that are favored by blue crabs, a vital food source for Kemp’s ridley sea turtles and a staple of the regional economy, are awash in oil.

The oil-drilling lease was sold to BP by the George W. Bush administration in 2007 under its 2007-2012 Five-Year Offshore Oil Drilling Plan.

The actual exploratory drilling was approved by the Obama administration on April 6, 2009.

Within days of the 2009 approval, the Center for Biological Diversity and its allies won a court order vacating the Bush Five-Year Offshore Drilling Plan. Rather than use the court order as a timeout on new offshore oil drilling to develop a new plan, Interior Secretary Ken Salazar filed a special motion with the court to exempt approved oil drilling in the Gulf of Mexico. He specifically identified BP’s operation as one that should be released from the vacature.

In July 2009, the court agreed to Salazar’s request, releasing all approved offshore oil drilling – including the BP operation – from the vacature.

BP has the worst environmental and safety record of any oil company operating in America. Even after the Texas City Refinery explosion that killed 15 people in 2005, BP has continued to rack up safety violations. Despite the dangerous nature of all offshore oil drilling and BP’s own egregious safety record, BP’s exploration plan downplayed possibility of a spill, repeatedly asserting that it was unlikely or virtually impossible. Amazingly, Secretary Salazar’s Minerals and Management Service approved BP’s exploration plan without any consideration of the environmental consequences of an oil spill.

The oil industry and its political backers

The Gulf crisis shows that the glib safety claims of the oil industry cannot be trusted.

There’s no way guarantee that a massive oil rupture will not occur. And if one does occur, there’s no way to contain it quickly and fully enough to avert unacceptable environmental damage. Ultimately, it’s the inherently dangerous nature of offshore oil drilling that led to this disaster.

That’s why the Center is calling on the Obama administration to do the following:

What if a spill occurs in the Arctic?

The Gulf of Mexico has by far the largest, best-equipped, most experienced oil spill-containment system in the nation. It has hundreds of experienced volunteer fishing boats at its disposal. The water is warm year round and relatively calm except in hurricane season. Wildlife rehab and cleanup crews have access to a road system in close proximity to much of the shoreline. Yet with all these advantages, the government and the oil industry are unable to contain the spill.

Imagine what would happen if a similar spill occurred in the Arctic – 140 miles from land. In subzero temperatures. With miles of sea ice to hack through, ship-killing icebergs in all directions, and darkness for 20 hours a day in the winter.

It would be a disaster many magnitudes worse than what we’re suffering in the Gulf of Mexico. 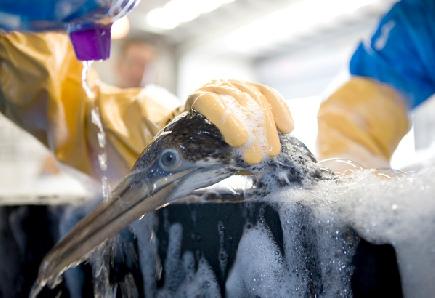 There’s no way to clean up a massive oil spill in the broken-ice conditions that prevail in these Arctic areas for much of the year. In fact, the ice-free drilling season is so short in the Arctic – July to early October – that leaking oil from a similar accident there could continue to gush for an entire winter while efforts to drill a relief well were necessarily postponed.

Yet President Obama has authorized Shell Oil to conduct exploration drilling this summer in Alaska’s Chukchi Sea with the same technology that was used by BP. He also proposed to open up both the Chukchi and Beaufort seas to additional offshore oil drilling in coming years.

It’s imperative that drilling does not go forward to prevent an Arctic oil-spill catastrophe that could be even worse than the Gulf disaster, threatening the polar bear, Pacific walrus; ringed, spotted, bearded, and ribbon seals; cetaceans like the North Pacific right whale, the bowhead whale, and the Cook Inlet beluga; migratory birds; and many other species.

Yes, as long as offshore oil drilling exists. We can and should improve spill prevention technology, but no technology will ever be 100-percent effective. The oil industry, Department of the Interior, and oil-state politicians told us for years that oil drilling in the Gulf of Mexico was completely safe. BP refused to even consider the effects of a catastrophic leak in its drilling plan because it said the likelihood was too remote to imagine. The Department of the Interior agreed, approving the plan without even conducting an environmental review. They were all wrong.

If we drill for oil offshore, we will suffer oil leaks. Many will be small, some big, and occasionally, one will be catastrophically large, like the one in the Gulf.

How often do oil spills occur?

Oil spills happen every single year. Year in, year out. Large spills happen every few years, from the 1969 offshore oil-platform catastrophe that dumped 3 million gallons of oil into the Santa Barbara Channel to the April 6, 2010 spilling of 18,000 gallons of oil into the Gulf of Mexico’s Delta National Wildlife Refuge – from a ruptured BP pipeline – to the current cataclysmic spill.

Indeed, the U.S. Minerals Management Service cavalierly assumes that nine large oil spills and 600 small oil spills will occur in the Gulf of Mexico as a result of its 2007-2012 program.

What can I do?

It’s easy to feel helpless as 1 million gallons of oil spew into the Gulf of Mexico per day with no end in sight.  At the same time, this is our opportunity to stop offshore oil drilling once and for all. You can get involved to save the Gulf, the Arctic, the global climate, and the oceans and all their inhabitants.