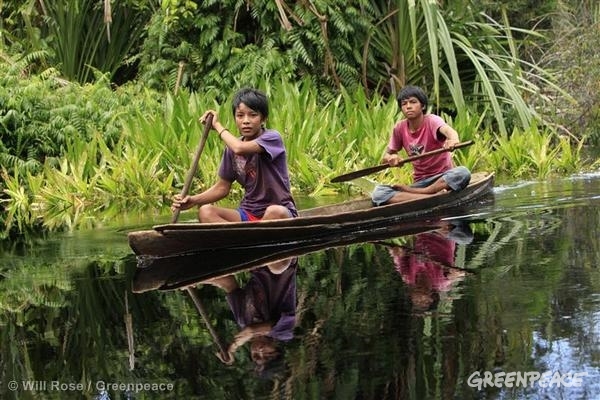 The rate of deforestation in Indonesia is now the highest in the world, alleges the journal Nature Climate Change. The study claims Indonesia lost 840,000 hectares of forest in 2012 compared to 460,000 hectares in Brazil. In response, Forest Campaigner at Greenpeace Southeast Asia, Yuyun Indradi, said:

“These findings are an urgent wake up call. Forest destruction is driving Indonesia’s greenhouse gas emissions, pushing animals like the Sumatran tiger to the edge of extinction, and creating the conditions for Southeast Asia’s devastating forest fires and Haze Wave.

“While it was a welcome step, it’s clear that Indonesia’s forest moratorium has not worked. Law enforcement is weak and even the country’s national parks are being logged – but now is a critical time for action. Indonesia’s outgoing President, SBY, has the opportunity to strengthen his green legacy: will he take urgent action to strengthen laws that protect all forest and carbon-rich peatland before his term is up, or will he see his legacy go up in smoke?”

Indonesia’s presidential candidates, Joko Widodo and Prabowo Subianto, will discuss the environment during a televised debate this week.

“These findings are an urgent wake up call. Whoever takes the helm as President of Indonesia must recognise that development does not mean destroying forests, but creating responsible land use practices. This means strengthening the forest moratorium to protect all forests and all peatlands, and respecting the rights of local communities. Companies around the world are transforming the way commodities like pulp and paper are purchased; it’s time the government creates incentives for these practices.”

“Industrial plantation companies are trashing Indonesia’s forests for commodities like palm oil and pulp paper which go into products on supermarkets around the world. The scale of the problem demands action from government and corporations.

“Greenpeace has successfully pushed big companies like Procter & Gamble, Nestlé and Unilever to clean up their supply chains. While on the ground, producers and traders like Wilmar International, Golden Agri Resources and Asia Pulp & Paper are beginning to show how No Deforestation policies can be put into practice. It’s critical now more than ever that more household brands and more plantation companies join this momentum for change.

Greenpeace urges companies like IOI, KLK, Musim Mas, Sime Darby and APRIL/RGE Group to implement a No Deforestation policy and immediately stop all clearance of forests and peatlands.