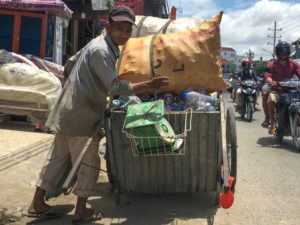 58 year-old waste picker Dara, plying his trade on the streets of Phnom Penh. Trade in e-waste goes for about 25 cents a kilogram. Image: Eco-Business

Amid mountains of computers, televisions, DVD players, mobile phones, and cables, Pich runs a mini-garage of about 1,000 square foot that processes about three tonnes of electronic waste a day. Reusable or recyclable materials are sold off, and the remainder is either burned in the shop or dumped as trash in the vicinity.

Business is booming, says Pich, who declined to reveal his full name. He sources about a quarter of his e-waste from overseas, and the rest from local scavengers like 58-year-old Dara, who earn little more than 25 US cents per kilogram of e-waste.

The numbers back Pich’s booming trade: E-waste generation rates in Cambodia, as well as the rest of Southeast Asia are skyrocketing, with a United Nations University study showing that East and Southeast Asia generated 12.3 million tonnes more e-waste trash in 2015 than it did in 2010, a 63 per cent increase.

But while this e-waste boom means more business for Pich and the thousands of men and women employed—formally and informally—in Southeast Asia’s e-waste processing sector, it is also a growing environmental and economic scourge that the region cannot afford to ignore.