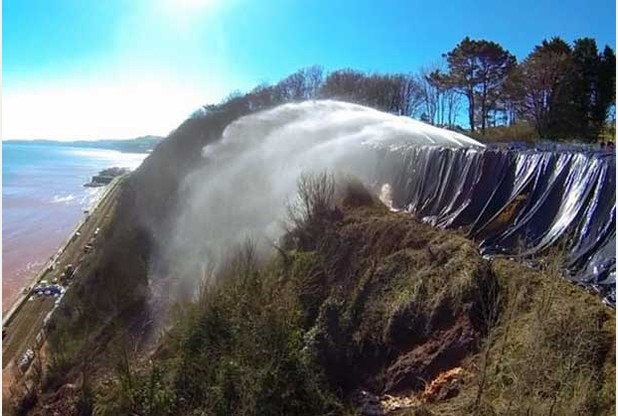 These pictures show a deliberate landslip at Dawlish, England that has turned the sea red after tonnes of earth and stone fell into the water.

Specialist fire crews helped set off a controlled landslide above the Dawlish to Teignmouth rail track where workmen are battling to reopen the line.

The operation has been planned by Network Rail since the storm of February 14 and they have assured the public in the area that there will be no dramatic shift of land.

They are working in conjunction with the army who have also been called in to help remove 20,000 to 30,000 tonnes of rock face.

The landslip was triggered by pouring water on to the soil and rock above the main railway line so the loose material was brought down and swept into the sea. Once the area is made safe the line is expected to re-open on April 4.

A small drone aircraft has been flown above the repair works at Dawlish to show the progress of bringing the mainline railway back into use:

Watch this timelapse video of the repairs between February 10 and March 14: