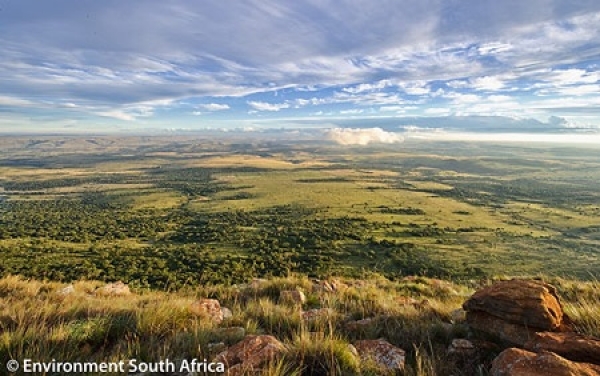 The historical town of Magaliesburg with it’s tranquil surrounds, unspoiled scenic vista’s and high quality landscapes stands on the brink of destruction by the mining industry. This highly popular eco-tourist destination, on the doorstep of the Cradle of Humankind World Heritage Site will be destroyed forever if the miners and the Department of Minerals have their way.

The Magaliesberg probably has the most intriguing and longest session of history than anywhere else on earth. The reason for this is the discovery of the remains of the earliest species of primitive man known today, in and around the Sterkfontein Caves, some 20 minutes drive from Magaliesburg and a declared UNESCO World Heritage site known as the Cradle of Humankind.

In 1947 Dr. Robert Broom extracted a well preserved fossil skull named “Mrs. Ples”, estimated to be around 2.3 million years old, from the world famous Sterkfontein Caves. More recently, in 1997, Professor Ron Clarke discovered “Little Foot”, an almost complete hominid skeleton aged at about 3.5 million years. Professor Clark describes the discovery of “Little Foot” as amongst the most significant palaeoanthropological finds ever made.

The scenic beauty and biodiversity value of the natural environment of the Magaliesburg is unquestionable. The value to man as a haven from the stress of urban life, and as an open space to enjoy, is clear. However, the archaeological interest in this area is as important as the natural aspects. The tourism potentials of the area far outweigh other negative forms of land usage and it’s no secret that the Magaliesburg is the top weekend getaway destination from the hustle and bustle of city life in Johannesburg and surrounds.

Magaliesburg is also one of the major gateway towns to the world famous UNESCO Cradle of Humankind World Heritage site providing a great majority of tourist accommodation and attractions and will soon host a visitor centre for the Cradle of Humankind which is planned to be built in the town.

Why is it then that this history and heritage is planned to be destroyed by Mining Companies, their Consultants and the Department of Mineral Resources? Why is it that this historical town and surrounding lands was recently removed from the Cradle of Humankind’s development buffer zone? 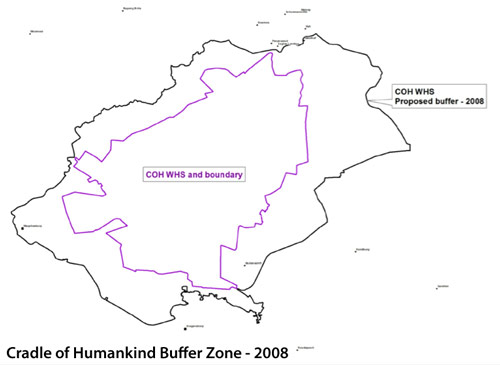 When the UNESCO Cradle of Humankind World Heritage Site was established, a buffer zone required for a world heritage site was established with a public consultation process. Initially this buffer zone included the historical town of Magaliesburg and surrounding lands as can be seen in the image above. However early in 2011 an updated process took place to amend the buffer zone area and it seems very few affected people seem to know about this process having even taken place. What is also very interesting to note is that the new proposed buffer zone (pictured below) now excludes the town of Magaliesburg and numerous other lands surrounding the Cradle of Humankind that were previously included. 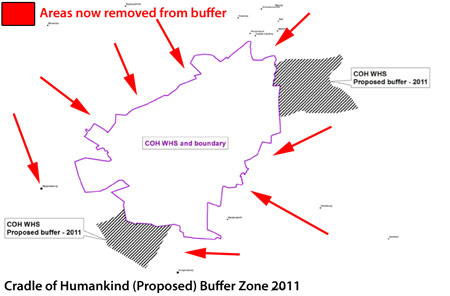 Is it merely a coincidence that since this amendment there is now a flurry of mining consultants trying to get prospecting rights or already having obtained prospecting rights on lands directly behind the town of Magaliesburg and other farms bordering the town? Why have such vast areas been removed from the buffer zone?

In recent months residents and landowners have come to learn of one mining company who has already successfully been issued with a prospecting license in the mountains directly behind the town of Magaliesburg and has been actively prospecting. It appears that very few people were informed about this application or invited to attend meetings or lodge objections.

This is certainly not surprising news because we have seen consultants try every trick in the book to say they did their part in inviting public participation. But the truth is that when signboards are erected they are either placed 2-3 metres high on street poles where nobody can see them, are often placed in places where they are obscured by other signs and almost 100% of the time these signboards are well under the size requirements for public noticeboards, some not even 50% of the required size. Given the scale of the area these noticeboards pale into insignificance and with the high winds the area often experiences some signs barely stay up for 24 hours.

Public participation process was not legit

This of course plays very nicely into the hands of the mining companies who then hold their public participation process, which gets minimal attendance and very few objections. The mining company then reports to the department that they conducted their process according to regulations, and get issued a prospecting license.

The only landowners that are ever consulted are the ones on whose lands they intend prospecting and often these consultations come with “gifts”. Neighbouring landowners who may protest or object are kept in the dark as long and as much as possible, just long enough until operations have already begun. Landowners who question the legality of the issuing of these licenses often have court interdicts or SLAPP suits issued in an attempt to silence them.

In recent times, another mining consultant has lodged a prospecting application on various portions of the farm Koesterfontein 45 IQ (koester is Afrikaans for “cherish”) bordering the town of Magaliesburg. The consultants appear to have spent ample time consulting with certain landowners, but then 8 days ago erected a few, barely noticeable, signboards around the area, giving a mere 10 days to lodge objections. The consultants also proposed their meeting to be held in the town of Midrand, an hour and a half’s drive away from Magaliesburg.

Meetings far away at inappropriate times

When tackled on the issue by numerous people, who had only by chance come to learn of this application, the consultants magically scheduled a second meeting for this process, which is now being held in Magaliesburg and at an appropriate time where residents and landowners can actually attend.

One thing is for sure, the heritage, history and beautiful vistas of Magaliesburg are under serious attack. The lands of Magaliesburg have been well protected for decades and many attempts in the past by mining companies have been thwarted. Equally, the lands of Koesterfontein have been home to generations of families and have been protected all this time and are noted by the environmental sector as sensitive class 1 ridges with high agricultural potential.

For those unaware, class 1 ridges are like red data species. The Bloubank River (Blaauwbank) is a river catchment running through Koesterfontein, feeding into the Magalies River and all these proposed mining activites border directly on this river. Any mining activity will, without a doubt, irreparably ruin this river system, the natural environment surrounding it and pollute rivers downstream, leaving agriculture which relies on water from these rivers to water their crops with acidic, even radioactive mine effluent.

South Africa is already dealing with a major problem of Acid Mine Drainage due to 120 years of ignorance by the mining industry and government, yet they and the government continue to turn a blind eye to the environments of this country, where waters and rivers are still relatively unpolluted, where the air is still good to breathe and where wildlife is still allowed some form of habitat.

If mining ever goes ahead on these lands the projects would be opencast mines and this would be absolutely devastating for the entire region, the tourism industry and natural environments of the region, not to mention place the future of the Cradle of Humankind World Heritage Site at great risk of being lost forever. South Africans have a duty to protect their heritage and to protect the history of this country.