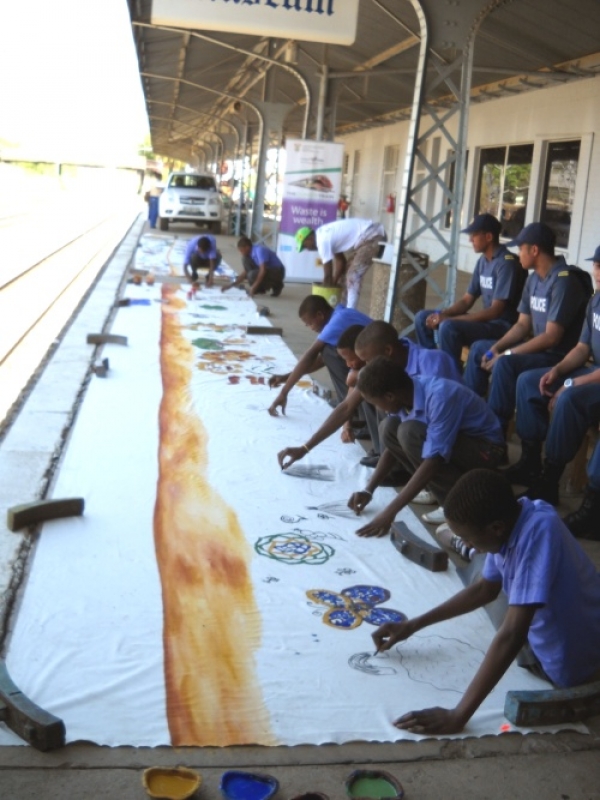 Today we figured out  from first hand experience why Kimberley is known as the city of diamonds. We might not have found a hidden bag of jewels, but what we did find was something far more valuable.

A diamond in the rough, unspoiled treasure, with a shine so radiant that it lit up the entire room.

Twelve year old Rethabile Senye of White City, Kimberley, showed herself to us during our journey in Kimberley. Soft spoken and unassuming, her innocent face could easily have been overlooked in the crowd of 600 learners that filled the station platform.

But her worth was far too great to be ignored.

During an imagination and painting activity, it emerged that this young girl had written a poem. When Elizabeth Fletcher, COPART writer heardRethabile’s poem, she knew what to do. She took the young girl  to meet the train’s resident poet, Mbali Vilakazi, who had inspired the 700-strong crowd that morning.

Using a wide rage of references from Mandoza, to her being a descendant of the San, Rethabile recited a lyrical poem evoking the ancient oral tradition, entitled: ‘Welcome to my world, South Africa.’ With tears streaming from her eyes, she weaved seamlessly between English, her mother tongue Setswana and Afrikaans, leaving Mbali deeply moved. 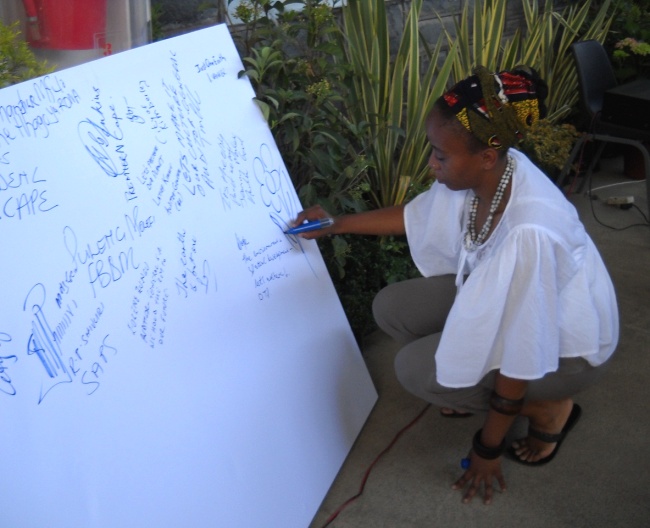 Nobody comes to these far-flung communities

‘These are the voices that need to be heard. Instead of giving long, complex speeches about adaptation and mitigation, perhaps we need to start listening more to people like this. Yes, there is plenty of work to be done around creating awareness and talking to ministers, but this train is enabling us to meet the unheard voices and discover them.’

‘This is the type of people we hope to reach and converse with throughout the journey. There is so much untapped and unpolished richness waiting to be discovered. This is part of the reason why I came all this way – to help people like her. No one comes to these far-flung communities. It’s been a humbling and rewarding experience thus far,’ Mbali said.

For Rethabile, the visitation to the Climate Train was more than just a fun field trip, it was an opportunity to be heard.  ‘I write poems because as a young South African I feel it’s important that we make our voices heard to defend and celebrate our own heritage.  Climate change is threatening to change everything we know,’ she said after her performance. 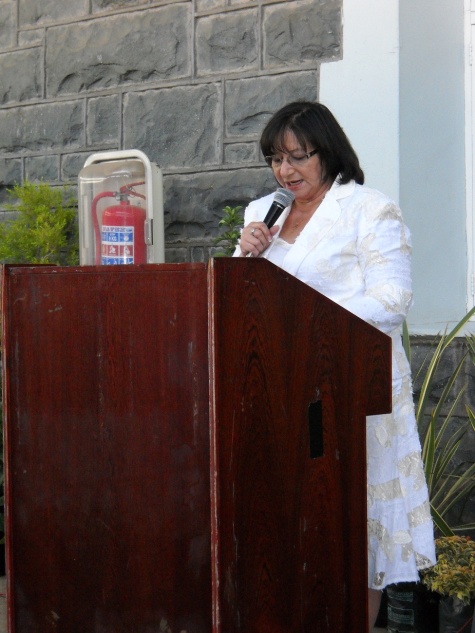 During the day’s programme Premier of the Northern Cape, Ms Hazel Jenkins, addressed the scores of guests including MEC of Environmental and Nature Conservation Ms Sylvia Lucas, Auditor General Mr Terence Nombembe and local dignitaries who filled the rows of seats stacked out on the platform under the morning sun.

She commended the Climate Train and the work they are doing.

‘Climate change is a reality and we have all experienced its threats in all different aspects of life. The Climate Train offers communities a unique opportunity to raise their concerns and questions around this issue. Everyone has a voice and our voices should be heard, even those ones who are unable to attend COP17. Thank you for mobilising our land and doing your bit to educate and raise awareness about this important issue.’

Educators learn to teach the preventers

While the learners from about six different schools got their hands dirty, planting trees and painting their interpretations of Mother Earth on and off the train and participating in educational activities, school educators also stepped on-board for a workshop around climate change in the conference carriage.

Stakeholders and partnerships manager for Indalo Yethu, Sinegugu Zikhulu, said the workshops are aimed at providing ways in which climate change issues could be transferred in classroom lessons.

Grade seven educator, Mrs Rowan Eleanon, was in favour of this proposal, saying that it’s important to educate people at grass-roots levels.

‘The children of today are the adults of tomorrow. The more learning they get around climate change, the better the chances that by the time they are older, they are able to make an impact. They are the active preventers of climate change. It’s an excellent idea to bring issues around climate change into the curriculum. If we don’t do anything about it now, they will experience far worse situations,’ she said.