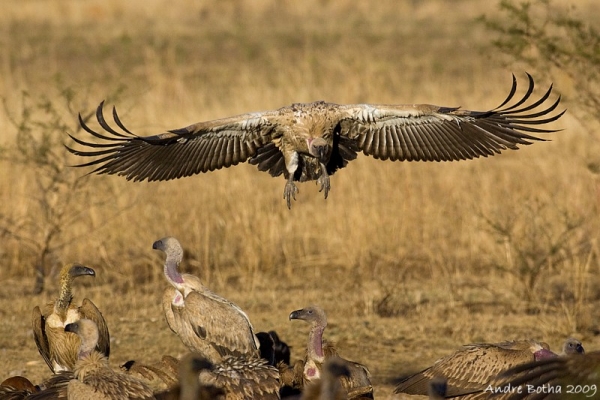 On the afternoon of the 15th of July 2013 an Ezemvelo KwaZulu-Natal (KZN) Wildlife light aircraft spotted a large number of vultures lying on the ground on New Hope farm, in Swartberg, during a routine game count. Ezemvelo KZN alerted the Endangered Wildlife Trust (EWT) and the African Birds of Prey Sanctuary (ABoPS), and the partner NGOs visited the site early the next morning.

Upon arrival they were greeted by the grizzly sight of the carcasses of more than 48 Cape Vultures and one African White-backed Vulture. Two Cape Vultures were found alive and were treated for poisoning by staff of the ABoPS. Both have fortunately responded to treatment and are expected to make a full recovery.

“Several sheep carcasses found on site are suspected of being intentionally poisoned in order to control jackal predation on new-born lambs. These carcasses, as well as samples from the crop and stomach contents of the dead vultures, were collected and sent to a laboratory for analysis. The subsequent results clearly demonstrate the use of a poison called Carbofuran in the baited carcasses. Carbofuran is a pesticide poison commonly used for destroying worms in crops. This is the worst incident of vulture poisoning in KZN that I have seen in the 12 years I have been working with birds of prey in the province,” said Ben Hoffman of Raptor Rescue, the dedicated bird of prey hospital located at the African Bird of Prey Sanctuary.

Due to the fact that many of the allegedly poisoned birds were adult individuals of breeding age, it is likely that the massacre will affect birds left alive as some may have lost one half of a breeding pair and their breeding attempts may therefore be doomed to failure.

Only 8 000 Cape Vultures left in the wild

According to Cobus Theron, of the EWT’s African Crane Conservation Programme, working in the Southern Drakensberg and East Griqualand, “It was devastating to see so much wanton destruction of life, particularly since there are approximately only 8 000 Cape Vultures left in the wild. This incident also undermines efforts of conservation minded farmers in the district. Authorities are in the process of formulating charges to be levelled against the parties concerned.”

The poisoning of vultures is one of the major factors that have caused a huge decline in vulture numbers across Africa resulting in at least three species being up-listed to Endangered on the IUCN Red List of Threatened Species over the last three years.

“In southern Africa alone, more than 400 vultures have been deliberately poisoned over the last two years. Poisoning seems to be particularly prevalent in certain parts of KZN where the use of the body parts of these birds in the muthi trade is a major concern. It is estimated that, at the current rate of illegal harvest of vultures for the muthi market, certain species of vulture may become extinct in the province within the next five to ten years,” commented Andre Botha, Manager of the EWT’s Birds of Prey Programme.

Blouberg Nature Reserve is hosting International Vulture Awareness Day (IVAD) on Saturday, 7 September. Activities on the day include an educational treasure hunt on various topics about Blouberg on a route with marked GPS points. For more info, contact Gerd Botha or Barry Fourie via email.