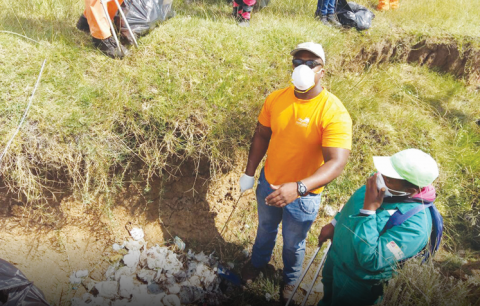 Since the invention of disposable baby diapers in the 1960s, consumption has sky-rocketed. Along with the increase in use of disposables come numerous environmental consequences. The pollution of water systems caused by used diapers is becoming obvious in many African countries, and globally, disposable diapers create large quantities of waste. Solutions to the problem must fit the local context and involve all stakeholders.

The development of new markets and the increase in purchasing power of people in many parts of the world, has made the disposable diaper industry anxious to accelerate the expansion of their products into these new frontiers. Corporations such as Kimberley Clark and Procter & Gamble want to be first in line to sell their products to new “throw-away customers” in countries of the Middle East, Africa and Asia.

When entering a new market, diaper-producing corporations often commence their operations by changing traditional views and practices. For example, ‘[w]hen P&G entered the Nigerian market with disposable diapers […] its marketing effort focused almost entirely on educating consumers on why and how to use the product.’

In a South African context, environmental organisation GeaSphere has, during the past few years, found this issue surfacing more often at rural community meetings. Since 2015, irresponsibly disposed diapers have become one of the most serious issues affecting the environment, second to environmental impacts from mining and large scale land transformation by agribusinesses.

There are many towns, cities and densely populated rural areas in Africa, where little or no service delivery exist to remove waste. Used baby diapers are discarded along roadsides and bridges, where this waste often ends up directly in streams and rivers. This new pollution combined with impacts from mining, excessive soil erosion and increased land transformation is pushing southern Africa’s rivers to the limits of sustainability.

Local community based organisations are involved in efforts to clear sections of rivers affected, but are struggling to maintain these efforts due to a lack of support. They often lack the basic protections such as rubber boots and gloves and having to commit their own sparse equipment.

African Traditional Health Practitioners complain about the way this particular pollution impacts their practice. Easy accessible areas along local rivers are used for traditional ceremonies and rituals. But these areas are now often littered with discarded diapers and other forms of plastic pollution, rendering the space unfit for healing or religious practices.

Apart from the obvious plastic pollution, used diapers contain human excrement, which should never be disposed of irresponsibly as it might lead to dangerous disease epidemics. According to the World Health Organisation, used diapers should first be rinsed before being discarded, to ensure raw human waste does not get disposed of in landfills. It is doubtful if any consumers follow these guidelines.

In 2015, GeaSphere was mandated by the South African Water Caucus (SAWC) to draft a letter directed at the corporations responsible for the production and distribution of these products, raising the issue and enquiring about the associated health risks. Subsequently, there have been various efforts to reach out to these corporations in an effort to obtain some commitment from industry leaders to assist in developing solutions to this problem. However, to date, no meaningful co-operation could be obtained. 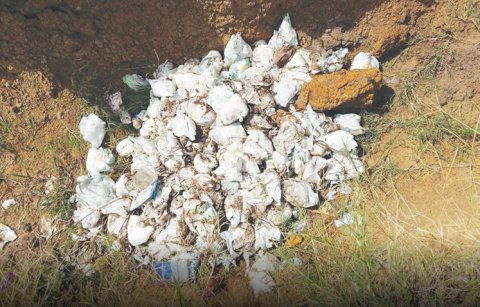 In a recent e-mail group conversation amongst members of the African Network for Water and Sanitation (ANEW), members from more than 20 civil society organizations, representing 15 African countries, raised concerns regarding discarded disposable diapers and other ‘single use’ sanitary products, polluting the environment and presenting a growing health risk. It is clear that there is an urgent need for a campaign to be developed to quantify and address the issue of disposable sanitary products. It is encouraging that there is commitment and a sense of urgency among regional civil society organisations.

Placed in a more global context, it can be seen that the diaper industry has already gained a strong foothold over the consumers. Preliminary research by GeaSphere Europe underlines the extent of the problem globally and more specifically in Europe. The global baby diapers market was worth US$ 46.5 billion in 2016, and its total revenue is forecast to grow to US$ 67.5 billion by 2022. In the US and many European countries, 90% of diapers are disposable. Given that a baby needs between 4000 – 6000 diaper changes, consumption is accordingly high. For instance, the annual amount of baby diapers used is an estimated 4 billion in the UK and 5 billion in Germany. In the latter, baby diapers produce approximately 1 million tonnes of waste every year, representing roughly 2% of all household waste. It is worth noting that used baby diapers mainly end up in landfills, taking up to 450 years to decompose.

Industry manufacturers, distributors and retailers are in large measure responsible for this problem, promoting the use of these products and changing the culture of consumers. The industry has to be involved in finding solutions to the problems they created, assisting to develop disposal facilities where none currently exist and developing their products to be recyclable, reusable or safely compostable.

Solutions to the problem of these discarded diapers are complex, and involve a collective effort from households, communities, civil society organisations, government departments and the industry itself. As part of the solution, awareness needs to be created regarding the impacts of single use sanitary products, safe and appropriate disposal, and alternative options, such as traditional knowledge-based solutions or reusable products.