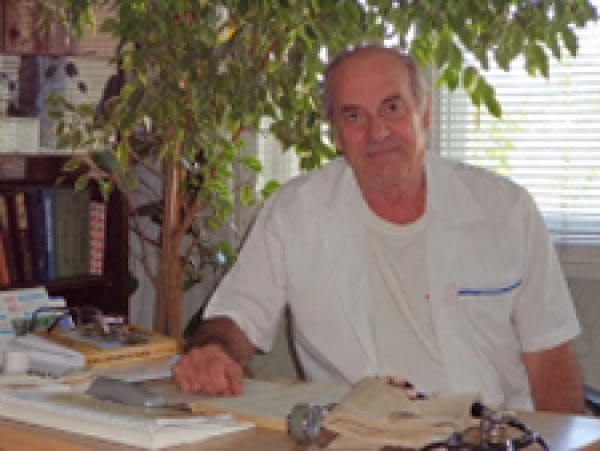 I would like to introduce a medical doctor and his personal experience of coMra-Therapy, as well as how he is actively using coMra-Therapy in his practice.

Dr Peycho Zlatev, MD, has worked as a doctor for all his life after graduation, which totals more than 41 years. He says that he learned the trade as young internist in his home town of Dryanovo, where during night duties he was on his own and had to take decisions in the moment in emergency cases. For more than a decade he headed the Cardiovascular department of a national sanatorium in Bankia, with a capacity of 105 beds dedicated to people with post-stroke conditions, infarcts, hypertension and so on.

There he became interested in physiotherapy and acupuncture, and he had the opportunity to converse with some of Bulgaria’s best experts in those fields and also to try out the best devices available.

Due to the economic chaos after the fall of the totalitarian system, many healthcare structures were closed and Dr Zlatev had to find another way. He ended with a successful free (meaning not tied to social funds and their bureaucracy) practice again in his hometown of Dryanovo.

Affordable treatment is hard to find

The main features that attracted patients to Dr Zlatev, were his excellent abilities as a diagnostician and his ability to help his patients, using medication far more cheaply than they would find prescribed elsewhere. Not an unimportant issue in a poor town!

I asked Dr Zlatev some questions about his experiences and his practice.

Q: Why do people come to you and pay when they can go to a hospital and be covered by the health fund?

A: Because… my young colleagues do not examine, they just stare at readings!

Q: How did you find out about soft lasers and especially coMra-Therapy?

A: This was because of my own disease. It started back in 2000 and got to the point of the discs between L4 and L5 being completely crushed. I could hardly walk and due to lack of innervation the muscles of my left leg atrophied: it became very thin. I was recommended surgery, but there is a very high risk – about 50% – of failure and subsequent paralysis, so I said no. I went through all sorts of physiotherapy, you know, no doors were closed to me, but to no avail. I was not very trusting of soft lasers initially, but some friends dragged me to Bulgaria’s leading expert in this technology and she convinced me to give it a try, which I did with great deal of resistance. Surprisingly, she managed to restore my left leg to some extent and there was a general improvement, but it stopped somewhere in the middle, so to speak. For example, I still could not walk without a stick and I could not sleep at nights without taking painkilling drugs. The problem with the latter is that they are very harmful to my ulcer and the good ones are very, very expensive!

When I tried the Delta Laser a couple of years ago, I could not complete the first treatment because I fell asleep from the sudden pain relief. After just a few days I could sleep peacefully at nights, with no drugs and soon my walking started to improve. I realised that as far as efficiency and speed are concerned, this new laser had no comparison with the previous one I had been treated with. After a couple of months I dropped using the stick and later even the numbness in my left foot, which had been a big problem while driving, greatly diminished.

Q: And you started to use the Delta Laser in your practice?

A: I tried it solely on myself for eight months. I had to be sure! Then I saw one fellow, he had a sore shoulder. It often happens when you put down the car window on a hot day: the wind can cause inflamation in your left shoulder. The exact term is plexalgia. With this particular man the pain was terrible: he could not move his heft hand at all. He asked me what he could do. I told him: ‘Come to me tomorrow, I have something in mind. I do not promise anything, but it is worth trying.’ The next day the relief was immediate. After 3 treatments he was fully recovered and I told him not to come any more: there was no point.

Great results from the get go

And it was like this, someone here, someone there. The results from the beginning were very good! Then the word started to spread, many new patients started to come because they had heard about it from others. Also, I was like a walking advert: upright through the town, with no stick!

Q: What are the typical conditions you treat with coMra-Therapy?

A: I have acquired great experience with joint diseases, ischialgia and traumas. Also, although there have not been too many cases, I have had excellent results with sinusitis and tonsillitis.

A: Well, always the more recent cases are more intriguing. What I was amazed about recently is the pain relief in a case of herpes zoster. It was almost immediate relief (in a few days), considering that it could be very nasty and could take months for recovery!

Q: What about relapses?

A: I would say, almost no relapses. People are all different, of course. I encourage them to observe themselves and then I ask for feedback. It varies: some feel the effect immediately, others feel nothing at first, but as a rule of thumb the fourth treatment is like the point of no return: after this everybody can feel the benefit of coMra and they stay with it. Of course, I usually do the full treatments and ask them to come for another course, as prescribed in the book. I am a doctor and I aim at healing – not just giving relief from the symptoms.

Q: Do you combine coMra with other therapies?

A: In 75% of cases not at all. Only coMra. Very rarely and at the beginning if there is acute pain, I may need to prescribe some painkillers. Also, in some cases I advise the patients to put on Aloe Vera, but only the cheap variety that you can buy for 2 EUR at the pharmacy.

A: Of course. It changed it many ways. For example, I am far busier now. As you see, I have no assistant, I do all treatments myself.

Q: Are the people you advised to purchase their own Delta Laser satisfied with their devices?

A: Yes, very much so. I check constantly with them and they are very satisfied.