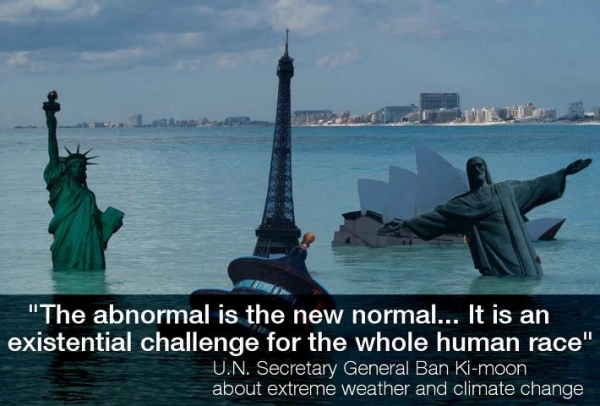 Greenpeace condemned politicians today following the failure of the UN Climate talks in Doha. While they agreed to a second commitment period of the Kyoto Protocol, it was judged so full of loopholes as to have little or no effect on carbon emissions.

“Today we ask the politicians in Doha: Which planet are you on? Clearly not the planet where people are dying from storms, floods and droughts. Nor the planet where renewable energy is growing rapidly and increasing constraints are being placed on the use of dirty fuels such as coal. The talks in Doha were always going to be a modest affair, but they failed to live up to even the historically low expectations.”

“Where is the urgency? The pace of progress is glacial. The inability of governments to find common ground to combat a common threat is inexplicable and unacceptable. It appears governments are putting national short term interest ahead of long term global survival.”

“Just three days after Typhoon Pablo (Bopha) hit the Philippines and showed the human cost of extreme weather in vulnerable countries, the decision by politicians not to increase the speed or scale of efforts to cut carbon pollution is inexcusable. The international process limps on, while the crisis accelerates. But with increasing impacts of climate change, pressure will intensify for a serious global deal in 2015.”

Reflecting on the behaviour of some of the governments, he added:

“This time Europe – usually seen as a leader on climate change comes away with dirty hands. Due to a collective failure of political courage, European governments chose to take the side of Poland, which demanded the right to keep ‘hot air’ Kyoto credits awarded to them in the 1990s. Europe also refused to go beyond a 20% emissions target, which would barely decrease emissions from today’s levels. The one faint glimmer of responsible behaviour on the part of the Europeans was that a few put climate finance pledges on the table. Europe has a long way to go if it is to ever reclaim credibility on climate.”

“The US remains outside the Kyoto Protocol, and its delegation came to Doha and immediately launched into blocking progress on nearly every front. Despite the devastation of Superstorm Sandy and polls showing majority support for climate policy, Obama’s team exhibits no improvement from previous COPs. With his administration’s subsidies of fossil fuel export that could negate domestic carbon pollution reduction, President Obama’s legacy could turn out to be no better than his predecessor’s.”

“Emerging economies such as China, India, South Africa and Brazil should step up and take a more progressive role in constructing a 2015 climate deal, as well as tightening emissions targets before 2020.”

“Governments would do well to take a leaf out of the book of the Dominican Republic, which despite having a fraction of the wealth of industrialised countries committed in Doha to a 2030 emission cap of 25% below 2010 levels, which it will implement unconditionally, and with its own money.”

“On the day the negotiations ended, Greenpeace announced that its ship M/Y Esperanza is leaving the port of Manila to respond to the humanitarian crisis in Mindanao, cancelling local oceans protection work to instead transport emergency supplies and work with local relief agencies. It is solidarity that should dominate the climate negotiations at Doha in times of crisis, and not passiveness, futile talks and a lot of “hot air”.