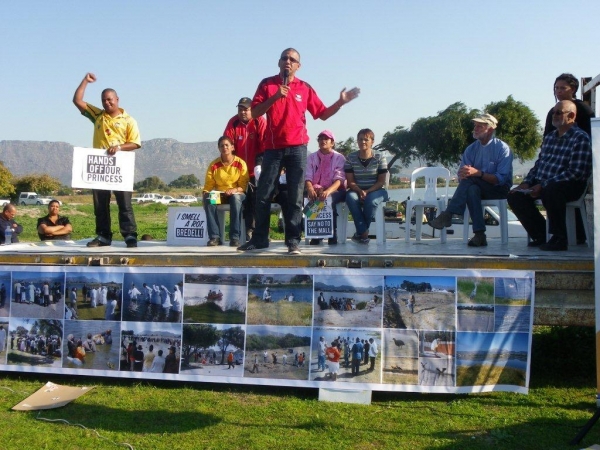 This message expresses the feelings of most attending the Youth Day Celebration hosted by the Princess Vlei Forum (PVF) on June 16. The event was held to show what a living, breathing Vlei could offer surrounding communities in contrast to the Mall development, which was effectively approved by MEC Bredell earlier this year.

But despite the militancy expressed by many speakers and audience members, the mood of the day was festive and celebratory. It seems as if someone much higher than the MEC was smiling kindly on the event, by providing one of those magical midwinter sunny days to welcome the participants.

The crowd was a mirror of Cape Town’s diversity, ranging from five year old princesses decked in pink organza and tiaras, to octogenarians reminiscing about what the Vlei has meant to them over the years. There were Muslims, Christians, businessmen, workers, nature conservationists, community activists, rappers, kite-flyers, fishermen, poets…. all united in their passionate desire to defend ‘the Princess’ from unwanted and destructive development. 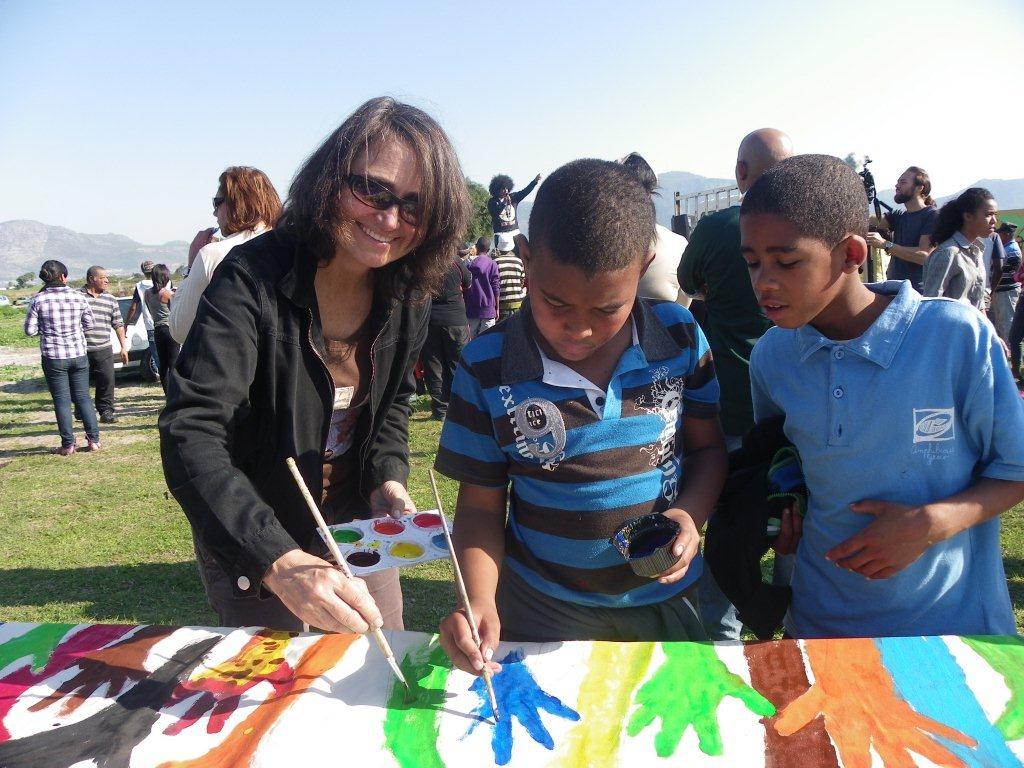 a message in bright colors

Children rode the two ponies on offer, painted banners and posters, and tied themselves in knots break-dancing on the stage, while their parents enjoyed braaing and picnicking and taking in the colourful sights in a leisurely fashion.

Graffiti artist Mak1one demonstrated his considerable skill with a spray can on a board. He graced the Princess Vlei toilet block with the masterpiece a few weeks prior to the event, but the council had had it removed. So this time he brought his own “wall”. The back provided a canvas for children to contribute their own messages and drawings. “Don’t even think about destroying our wetlands”, said a butterfly drawn by one young artist. “I totally agree” replied a neighbouring fish.

a long history with the vlei

Mak1one has a long history with the Vlei, having grown up in nearby Kafda. He used to sneak out to swim in the Vlei, disobeying his grandmother who subscribed to the common belief that the Khoi Princess who was murdered here took a life each year in payment – and she was determined that her grandson would not be sacrificed. Mak1one claims that the beatings he earned were worth it.

The formal part of the day was hosted on the back of truck donated by Buildwell Buildit (Grassy Park). It began with a cleansing ceremony, introduced by Chief !Kora Hennie van Wyk and others from the House of Xoraxoukhoe. The dignitary leading the ceremony explained that the imphepho herb that was burnt, which is often often used in Xhosa ceremonies, was originally significant to the Khoi san – showing how the Khoi ancestry is common to many of us. 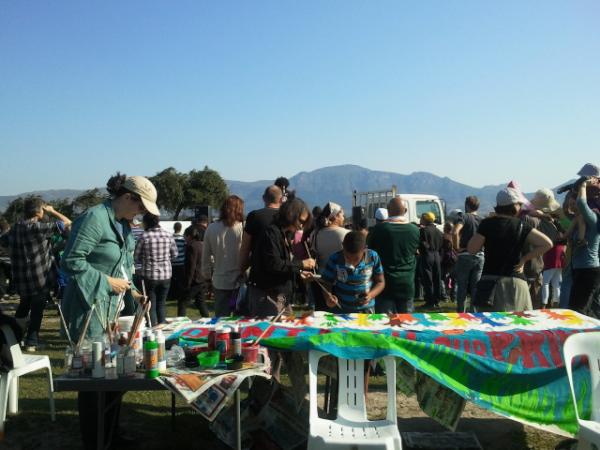 Shegh Shaheen Abrahams, an ardent outdoor enthusiast, environmentalist and Imaam of the  Masjid Ishraaq mosque in Grassy Park,  said that he was grateful for the opportunity to share his views on safe-guarding our heritage and environment. Abrahams called the people to pray for a successful outcome to the People’s Rally and for the future of the People’s Plan for Princess Vlei. He said that the destruction of the youth is linked to the destruction of the future, that there are communities where precious young people are in danger, and that the Vlei and its surrounds would be better used in the service of our youth than a mall.

a message of faith

Rev John Oliver, of Cape Town Interfaith Initiative, reminded the crowd, “This land is on loan to us from God, and we must hold it in safekeeping for our children and our children’s children.” He led the people in prayer that they may be “faithful stewards of the earth.”

Long standing residents commented on how memories of the Vlei are deeply interwoven with their lives. 84 year old Mr Edward Johnson raised his six children three minutes away. “On Saturday afternoons we would walk down to the Vlei and I would put in a line for each child and they would catch beautiful carp…. In winter, th Vlei would run over and we couldn’t get out of our house… My children still remember these days… This Vlei belongs to our people.”

Mr Sam Khan recalls, “I can remember the days when every evening I took a walk down here with my dog and we watched the swans in the water… everything was so peaceful… I believe that this land was left to the people by a private land owner in the early fifties so I say this matter must go to the highest court in the land, and I will put part of my pension towards the effort.”

Mr Philip Bam, Chair of Lotus River and Grassy Park Civic Association LOGRA and one of the founding organisations of the Princess Vlei Forum, commented on how the campaign was another step in helping people of the area in their search for heritage and identity. “One of the wonderful things that this campaign has done for us is that it has brought us to realise who we are… Harry the Strandloper was the undignified way the powers of the old days referred to our people. In this way they took away our heritage and inheritance. Just as we are restoring the fynbos here at the Vlei, we will restore our dignity….” 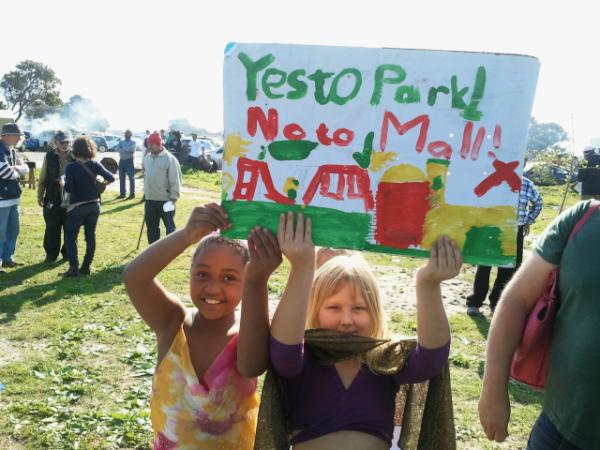 Tony Ehrenreich roused the leisurely crowd to enthusiastic applause when he said: “Don’t for a minute believe those who will tell you that workers will stand with these big business interests because it will provide us jobs. We know that we need jobs in this country but much more importantly we know that we need to defend and sustain our heritage and that is why COSATU is standing behind the Princess Vlei committee.

“We have come together in all our hues, black and white, DA and ANC, this is not about politics and it is not about race, it is about assuring ourselves that we must stand on the side of justice”

Ehrenreich commented on the power of open public spaces to unite South Africans and build a common nation: “We need places where we can come together as black and white in a real space like the Princess Vlei, but those spaces are shrinking… they are being taken away but they should be expanding.

leave it better than we found it

“Our greatest responsibility is to raise the house of our people to be better than how we found it, and it will not be better if we are tearing down the legacies and beauty of our country in the interests of a few capitalists who have no regard for our long term interests … an injury to one sacred space is an injury to all.”

Ehrenreich concluded with the following pledge: “We want to assure you as COSATU that while we will sign petitions and pray for the Princess Vlei. We will also not hesitate to fight for the legacy of all our people…”

The speeches ended and the shadows lengthened across the grass as the crowd sang and danced into the afternoon, as the children ran and laughed. The Vlei seemed to smile to see her banks being enjoyed by so many. For one day, the Princess Vlei Forum and the community, the birds, the water, the mountains had all come together to show what can happen when natural spaces are cared for and made available to heal us, unite us, and, (to paraphrase a comment by Philip Bam) “soothe our angry souls.”

We can only hope that those with the power to ensure that the Vlei is not “Malled” will recognise the priceless value of this land as a restored and nurtured natural space. But the day made one thing clear: Anyone who wants to build a mall on the Vlei, will have to fight a rapidly growing and determined community of people dedicated to defending their Princess.

Tony Ehrenreich, Provincial Secretary of COSATU for the Western Cape, gives his support to the community at the People’s Day Rally, a remarkable community event, held at the shores of Princess Vlei on Saturday 16th June.