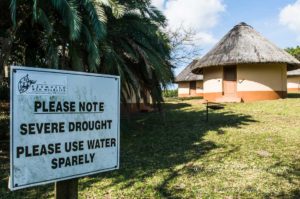 South Africa remains under pressure when it comes to efficient water use and conservation, where limited supply is increasingly stressed by rising demand, aged and insufficient infrastructure and lack of consumer awareness.

South Africa is rated as the 39th driest country in the world, receiving only half the average annual rainfall that the rest of the world can expect. Though most South Africans are acutely aware of the recent drought in Cape Town, the reality is that eight out of nine provinces were declared disaster areas in 2016 due to ongoing drought.

Some areas have since had some relief, with wetter conditions over the summer months, leading many consumers to take water restrictions less seriously. However, the recent rain is insufficient to secure enough water resources for the foreseeable future.

The influence of climate change

Climate change is having an impact on rainfall patterns in South Africa. Changes to precipitation patterns and the increase in the frequency of floods and droughts will mean South Africa has to reconsider its approach to water management.

In addition, numerous climate models suggest that the eastern parts of South Africa will see increases in rainfall, whilst the western parts will become drier. The provision and management of water supply will need to account for these changes.

One of the biggest challenges inhibiting South Africa’s response to climate change and water conservation centres around water infrastructure. Despite being one of the most sophisticated water infrastructure networks on the continent, funding and capacity constraints mean it has fallen into disrepair and there are still several areas outside urban nodes that don’t have access to water services.

It must be noted that Government has certainly realised the importance of both creating access to, and protecting, available water resources. It committed to prioritise water projects and infrastructure in the 2019 Budget, and reiterated this commitment in 2020, but implementation challenges are exacerbated by complexities in financial and environmental planning for rapid population growth, urbanisation and industrialisation.

98% of the country’s water is already allocated and demand for water services has outstripped infrastructure development. This is compounded by the fact that people use water as though they are living in a water-rich country, with little regard for conservation.

That said, the public’s response to the Cape Town drought shows that this likely isn’t due to a wilful disregard of water issues. Awareness, communication and education saw all levels of end-users reduce their water usage dramatically.

In Gauteng, however, the hype around the drought has been kept to a minimum, most likely to prevent negative economic impact on South Africa’s highest regional contributor to GDP. But in reality, dams overall are currently at 50% capacity and we are far from out of the woods.

The lack of hype doesn’t mean Gauteng is ignoring the problem. There are good interventions in place to cope with various well-modelled scenarios. Gauteng will have a “day zero”, but with multiple scenarios influencing the selection and implementation of interventions, the exact date is flexible.

End-users do need to change their approach, however, and a tiered approach to water tariffs could be the answer. 25 litres of water per person per day, and 200 litres from a standpipe, is a comfortable allocation to maintain appropriate hygiene and general household activity. At this tier, water is appropriately priced.

Water use at the next tier, however, should be more heavily restricted and charged for accordingly. Activities that push a household’s water consumption into this tier include washing cars or maintaining gardens that are not water-wise. Roses and lawns are particularly thirsty, for example.

Higher tariffs for unnecessary water use would change our view of water as a resource and drive consumption behaviour that reflects its scarcity.