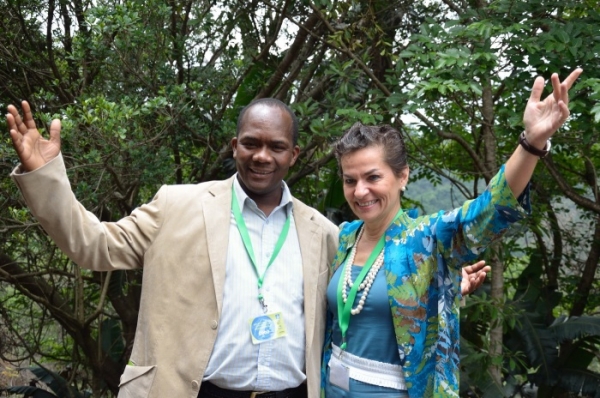 Ahead of the opening of the COP17/CMP7 Conference on climate change in Durban on Monday 28 November, Executive Secretary of the United Nations Framework Convention on Climate Change, Christiana Figueres, performed her first ‘official’ function at the launch of the Durban CEBA (Community Ecosystem-Based Adaptation) Initiative at Durban’s Paradise Valley at the weekend.

The project is being driven by eThekwini Municipality in partnership with NGO’s, businesses and other spheres of government.

The project, which involves ecosystem restoration in the uMbilo River catchment west of Durban, has been adopted as the official voluntary offset mechanism for COP17/CMP7. Apart from enhancing the city’s capacity to adapt to climate change, the project is also expected to be able to successfully offset the estimated 15,000 t CO2 equivalent of emissions the event will generate in Durban.

Joined by high-ranking municipal and provincial role-players including Durban Mayor Councillor James Nxumalo, City Manager, Mike Sutcliffe and MEC of Public Works and Human Settlements Ravi Pillay, Figueres said that the CEBA project was a ‘shining example’ of the kind of projects that should be encouraged and promoted as part of all cities’ response to climate change.

She also emphasised that investment in the natural environment is the most sustainable approach to building adaptative capacity. She described the Durban CEBA Initiative as the perfect combination of mitigation and adaptation and commended it for managing to achieve a combination of all three essential elements of any response to climate change–offsetting of carbon emissions, promotion of ecosystem-based adaptation and responding to the needs of communities by providing opportunities for social upliftment and job creation.

“It takes courage, perseverance and wisdom to create a project like this and Durban has had the vision to do it, Figueres said. “It is easy to have ideas, but difficult to ‘do them’.  Durban is walking their talk and I urge them to continue to inspire the world, with their work,”

In the hosting of COP17/CMP7, Durban has taken responsibility for minimising the ecological footprint wherever possible and where not possible, to offset the remaining local impacts.

A number of initiatives have been put in place to minimise the event’s carbon footprint, including energy efficiency interventions at the ICC, the implementation of a Responsible Accommodation Campaign targeting all accommodation businesses in Durban, and the design of efficient public and non-motorised transport systems for delegates to use.

The CEBA Initiative is pioneering in its nature and one of the most significant of Durban’s greening legacy projects, created around the COP17 event. It allows Durban to ‘Africanise’ adaptation, by drawing communities and ecosystems together in a new ‘green partnership’ that promotes sustainability and resilience in cities like Durban.

Through this important work, ecosystem services are enhanced, resulting in increased adaptive capacity to climate change, as well as mitigation of carbon emissions through natural sequestration and carbon storage processes.

Making the programme even more meaningful to the wider audience, delegates, corporates and residents of Durban will be able to contribute towards the project by buying ‘CEBA credits’ to offset the environmental impact associated with COP17.  CEBA Credits can be purchased at R100 per Credit, which translates into 1 green-person workday ie. One credit = one community person employed to do ecosystem restoration work for one day.