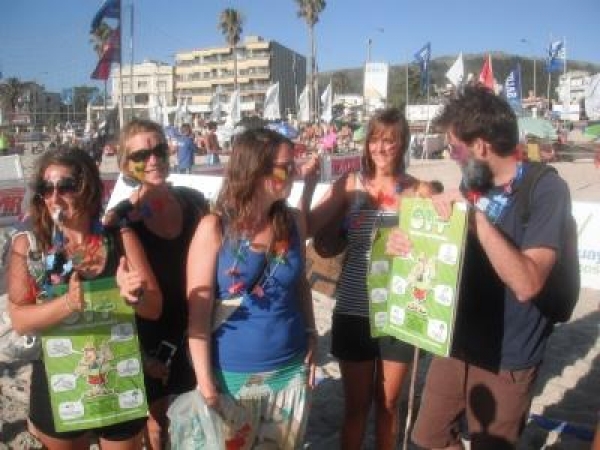 I am back in South Africa and more than ready to tell everyone about my experience on the 5 Gyres expedition from Walvis Bay to Uruguay.

The last few days I found myself pondering our arrival. How would we be received?

When we entered the harbour, the long-awaited pathway to land and freedom, we were surprized to find the following scene: Little ‘green’ men and women jumping up and down, whistling, waving their arms, clapping, cheering and some even crying. It was Ecoplis, the Uruguayan environmental organisation who, with the guidance of Heather Box (crew member Carolynn Box’s sister), had come to welcome us.

We jumped up and down too, ran to the guard wire and waved our arms. Some of us even burst into tears. We had been on a boat for 32 days and here, in the harbour of Piriapolis, were people that were proud of our efforts. This was followed by a large press conference which landed us on the radio, television and in the Uruguayan newspaper El Pais. Right across Piriapolis we were recognised and people knew about the Five Gyres expedition – and they were keen to meet us.

The following day we were invited to accompany Ecopolis to participate in an initiative to clean-up the Piriapolis main beach. To me the beach looked spotless – as Uruquans treasure their environment – but  Carlos Rivero, speaker for Ecopolis, used the opportunity to tell beachgoers about our expedition. We dressed up in green Ecopolis signs and painted our faces in bright colours. To attract even more attention, we chanted a Spanish song about cleaning our beaches and protecting the environment.

We marched onto the beach, seemingly confident, but actually scared of how the crowds might react. Carlos used an empty plastic bottle as a microphone and passionately uttered phrases in Spanish. Suddenly, something unexpected happened. The beachgoers jumped up, starting clapping hands, whistled, cheered and ran towards up to hug us. 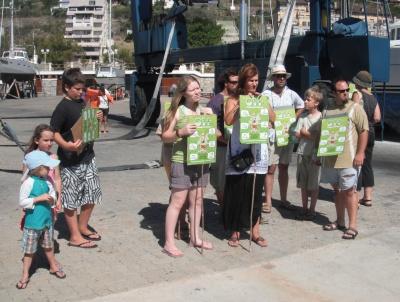 What did he tell them?’ I asked, thinking that there must be some misunderstanding, as we’re not from the royal family.

‘He told them about your voyage and the courage it takes to research plastic pollution on a boat,’ an Ecopolis member explained.

Chills ran down my spine and I smiled so much that my face hurt.

The beachgoers thanked us (in Spanish of course) for our research and chanted the song with us. I was amazed at how much they valued their beaches and natural environment. We walked to a next crowd and a next, and after telling the same story for the sixth time, Carlos announced the end of our day.

Just before we left, a group of 12 – 18 year olds started dancing on the beach, holding big banners which read ‘NO! to domestic violence.’ The teenagers cheered us on and waved goodbye.

In Uruqua the Earth and her resources are still revered, and we have much to learn from this warm nation. We can only but hope that it would be possible for our nation to also recover our deep felt appreciation for the key role that She plays in the quality of our lives and our very survival.