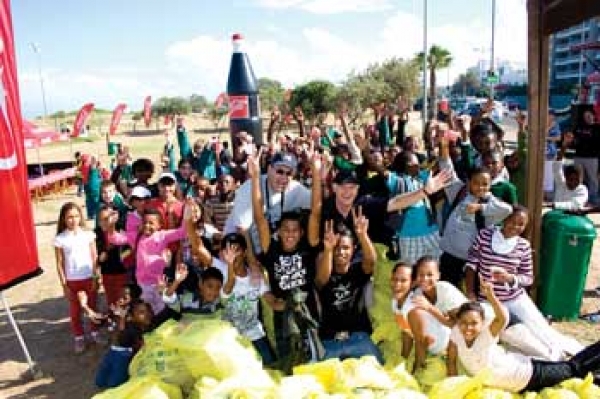 In 2004 Sir Robert Swan lead a team to the Antarctic, supported by Coca-Cola, where over 1000 tons of waste was collected from the icy landscape. Five years later, Peninsula Beverages, the Bottler of the Coca-Cola products in the Western Cape, continues to actively support projects that help clean up our planet.

PenBev have partnered with the Environmental Action Group and put their efforts behind the Our School Cares Programme, an environmental clean up programme where school children are motivated and rewarded for cleaning up their own schools and communities.

The Our School Cares Programme, previously known as Adopt-A-Spot, invites schools to adopt-a-beach, open space, park, river or canal in their area. Over a period of time the students transform their spot from a once littered area back to an environmentally friendly vicinity. Our School Cares monitor their progress regularly, captures the result and schools are scored accordingly. Thirty one schools have registered clean-up projects, encouraged by a R20 000 prize for the school who makes the greatest impact in cleaning up.

Schools from across the Peninsula, from privileged and not so privileged areas have displayed a passion for cleaning up their environments: HoÃ«r Meisieskool Bloemhof from Stellenbosch created innovative fynbos of extinct and endangered flowers made from re-cycled materials which were planted around the flagpole in Stellenbosch. Learners from Masivuke Primary School in Phillipi adopted a field next to their school and converted it from a pollution dump into a beautiful park where children can play.

Factreton Primary School in Maitland built a garden in front of their school. Participating schools and the Peninsula Beverages staff gather twice a year to tackle the trash on two beaches: Milnerton Beach and Strand Beach.

Aside from collecting piles of rubbish, the project makes people aware of the damage that pollution has on global warming, and encourages children to get involved in cleaning up their own community. Armed with surgical gloves, garbage bags and considerable amounts of enthusiasm, the group rolled up their sleeves and went to work to make the beach part of the fairer Cape.

This year the event took place on Earth Hour Day and schools also conducted a marine litter audit and will present their findings and results to Ocean Conservancy International. According to Environmental Action Group Director, Rodney Leak ‘Barack Obama’s slogan, ‘Time for Change,’ sums up the Our School Cares programme.

Stuart McLeod, MD of Peninsula Beverages explains: ‘The Our School Cares Programme is a fun, participatory and meaningful way for students in our communities to learn more about their environment. It’s a way for businesses to acknowledge schools’ contribution to improving the environment and a means for students to demonstrate their ability to make a difference.’

‘As one of the biggest producers of soft drinks in Cape Town, we recognise the importance of a clean and healthy environment and believe it is vital we play a pioneering role in ensuring that our community is clean.’

‘By partnering the Environmental Action Group, we encourage scholars to be more environmentally aware and reward them for their efforts. We will assist with the clean up of a number of beaches this year as well as providing incentives and support for community related clean up projects,’ he added.

The next beach walk and clean up for all schools to participate in is on Saturday 6 JUNE at Strandfontein beach. Learners meet at the Strandfontein Pavilion car park at 8.30 for 9.00, where they will receive their bags and gloves. The new mayor and local councillors are also invited.