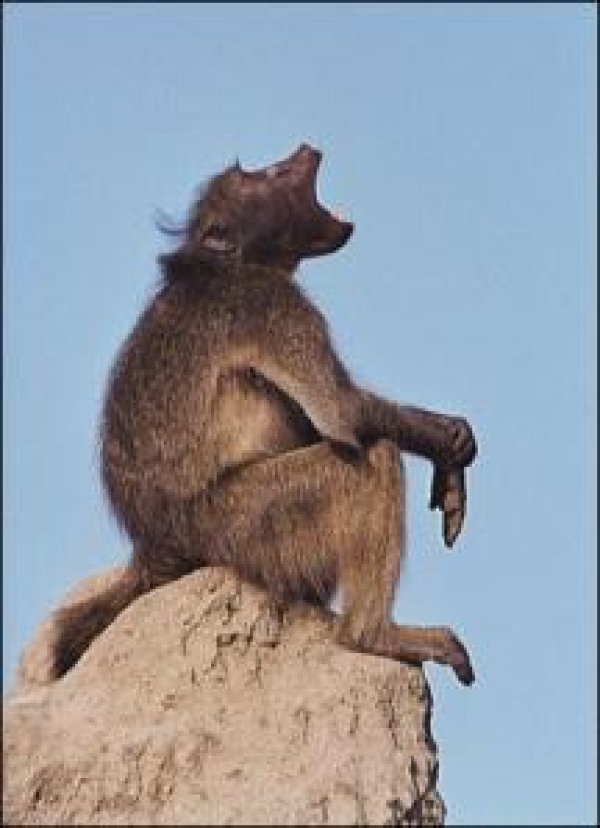 By not supporting a moratorium on the on-going trapping and shooting of baboons in FSC-certified timber plantations in South Africa, the Forest Stewardship Council (FSC) International seems to place economic interests above ecological values.

In response to a formal complaint lodged by GeaSphere, an environmental pressure group based in the Mpumalanga province of South Africa where baboon killings are taking place the FSC’s supposedly independent and impartial Complaints Panel refused to end the killing of baboons using the cruel ‘trap and shoot’ method. ‘The Panel’s strange decision will just give the timber industry further justification for the ruthless killings’ says Tim Strupat, a German volunteer at GeaSphere.

Since the beginning of 2011 at least 295 baboons have been killed in FSC-certified timber plantations in Mpumalanga, which is the heart of the plantation industry in southern Africa, according to Philip Owen, GeaSphere’s Chairperson, who added ‘Since the industry began using lethal control methods in the 70’s it has been responsible for the deaths of more than 4000 baboons just in this province.’

Yet the timber and paper products from tree monocultures are certified by the FSC as being from ‘responsibly and sustainably managed forests’, despite the long-term destructive impacts of timber plantations on the biodiverse grassland ecosystem that they replace. Scientific studies show that rare and endemic plants rely on seed dispersal by baboons for their survival.

Furthermore, these large-scale plantations are exclusively of alien tree species ‘ mainly invasive eucalyptus and pines ‘ that impact negatively on soil, water and biodiversity resources, affecting local communities and the environment. ‘From the perspective of their ecological damage, monoculture tree plantations should not be certified at all; these ‘green deserts’ are only about making obscene profits for the companies concerned,’ continued Philip Owen.

The FSC and the timber industry try to justify the killings by claiming high financial losses caused by baboons – labelled ‘problem animals’ – stripping bark off plantation trees and causing some to die. However scientific studies argue that lethal control has not been effective; although thousands of baboons have lost their lives to the timber industry, damage to plantations persists.

According to Tim Strupat ‘It is obvious that lethal baboon control methods are not effective ‘ the solution is to move away from lethal methods by putting a moratorium on killings into place and starting an extensive research program to determine possible non-lethal solutions.’

As an independent eco-label for ‘responsible’ management of plantations and forests, FSC might have been expected to stop the killings and to demand more research and data on baboon-damage from the timber industry. Instead, the FSC acted in the interests of the timber industry.

‘The Complaints Panel appointed by the Executive Director of FSC International, Andre de Freitas, was not independent and impartial at all,’ states Philip Owen.

‘We have proof that at least one of the Complaints Panel members has been working for the timber industry on this particular issue.’ said Owen. Although GeaSphere asked that the FSC make sure that the Panel composition was in accordance with FSC guidelines, the management of the FSC failed to do this. This has devastating implications for the baboons being shot in South Africa.

There is evidence that the FSC deliberately withheld crucial information in respect of members of the Complaints Panel from GeaSphere as the complainant.

‘This directly influenced the outcome of the formal complaint and a FSC-internal investigation should consider it a fraudulent act. The FSC management must be held responsible for many more baboon deaths’

In an open letter from GeaSphere to FSC’s Board of Directors and staff members on the 16th of June 2011, Philip Owen states ‘Due to the potentially fraudulent process experienced with our formal complaint, we no longer trust the Executive Director with the task of reviewing the mistakes made and with taking the necessary steps to rectify the situation.’

In the letter, GeaSphere and a number of international groups reject the findings of the Complaints Panel due to its breach of the FSC guidelines for processing a formal complaint. It also demands an immediate moratorium and the formation of a new ‘independent and impartial’ Complaints Panel to objectively decide upon the future of baboons threatened by plantation companies in South Africa.

‘In particular we appeal to the environmental chamber members of the Board of Directors ‘ including the representative of the World Wildlife Fund ‘ to take the necessary steps.’

Globally, FSC has been exposed to growing criticism, and several environmental organisations have withdrawn from the dubious certification system in recent years. The FSC certification system is deceptive not only from an ecological perspective; it is questionable that large tree monocultures can be certified to deceive consumers into believing that the FSC label can ensure ecological sustainability.

‘If the FSC wishes to regain its credibility, it should revert to its founding mission ‘ to ensure ecologically and socially sustainable management of real forests.’

In the future, FSC plans to establish ‘guidelines’ for the timber industry to deal with ‘problem animals’, but unless there is a moratorium on baboon killing till such ‘guidelines’ are approved and implemented, FSC will be guilty of allowing the unwarranted destruction of wildlife to continue.