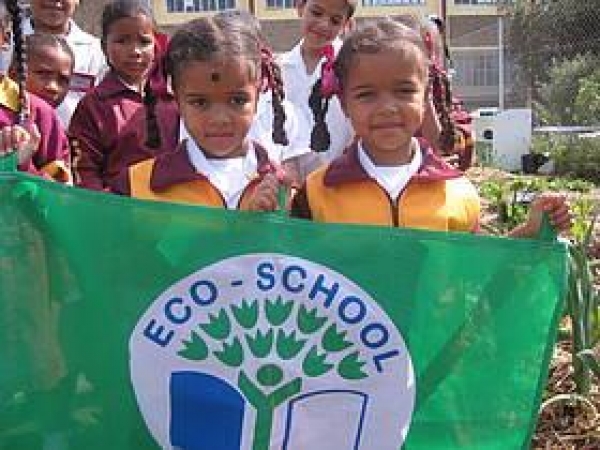 In SA, the greening of schools has been a gradual process. One initiative that seeks to change this is the WESSA/WWF Eco-Schools Programme, an environmental education programme that offers sustained engagement between schools and environmental agencies, and continuously awards schools for their efforts.

Schools are assessed within their capacity and international flags have been awarded to both under- and well-resourced schools in rural and urban areas – who demonstrate positive environmental and social change – across the country.

The programme is regarded as a flagship, and one of the most effective environmental education programmes in South Africa to date. Overseas, however, the schools are being greened up at quite a pace.

Head-Royce, an independent K-12 school in Oakland, California, has long been a leader in integrating new educational themes.
For example, the faculty spent one year focused on weaving diversity into the curriculum. The next year, they did the same with globalism. And the following year, they integrated sustainability into every grade level and subject matter in this school of nearly 1,000 students, faculty, and staff.

For a faculty unaccustomed to resting on its laurels, this raised an inevitable question: What next?

For Crystal Land, assistant head of school and academic dean, the answer was: Bring it all together.

“We wanted to see if there was a way to show that these efforts were not just about creating new units and being done with it, but understanding how all the themes can come together and make really meaningful education for twenty-first-century learners,” says Land.

During the 2009-2010 school year, Head-Royce faculty consulted with Carolie Sly, director of education programs at the Center for Ecoliteracy, and designed new “mission integration” projects throughout the curriculum.

In the lower school, for example, a project that once called on students to design a dream house became something of a very different order. Working together, classroom and language teachers charged students with designing sustainable and affordable homes for families in Peru, Haiti, Quebec, and Morocco. Fifth graders taking Spanish had to design homes in terrain ranging from the slums of Lima to the Amazon Rainforest and the mountains around Machu Picchu.

But first they wrote about the families, enabling them to imagine the life of a single 45-year-old mother of four who made $40,000 a year as a seamstress and needed a home. Teachers also brought in photographs (including some they had taken themselves during summer travels) of different kinds of houses and of tools relied on by inhabitants of these areas, such as cisterns for water.

Next came the challenge of choosing building materials – a task that required students to analyze a spreadsheet that identified the costs of supplies, from local trees and rubble to the finest lumber.

“We came up with the numbers off the top of our heads,” says fifth-grade teacher Ben Ladue. But with the cost of natural wood clearly cheaper for people who lived in a forest than for those who lived in the desert, even the hypothetical costs reflected the basic idea that it frequently makes more sense to use materials that are native to one’s area.

Students were then asked to develop blueprints, followed by 3-D models, with one unbendable rule, notes Ladue: “You can’t buy anything.” They were encouraged to go out into the school garden to find sticks and leaves and figure out how to make dirt stick together.

“Looking back, what stood out for me,” says Ladue, “was that at first I’d thought, ‘Oh my God, we’re going to have to put out so many fires as we go,’ because we knew that if the wood costs this much, and they had to buy that much, and the families’ salaries were not even close, we’d have problems.” But the kids thought creatively, coming up with solutions the teachers hadn’t anticipated, such as making 2x4s from trees that had already been cut down.

As student Sawyer Thompson recalls, “This project was challenging because I had to use a budget and meet it,” and I really made use of my imagination.”

In other lower-school classrooms, kindergartners studied wood and how the principles of sustainability apply to it. First graders interviewed astronomers, medical professionals, and environmentalists to understand how their work can create a closer, more diverse, and sustainable community. And second graders wrote to Indonesian children to learn about how they used water in gardening, bathing, and drinking, and how their waterways compared to Oakland’s.

In middle-school classrooms, sixth graders researched and reported on the steps various countries and cultures have taken to solve environmental problems. Seventh graders studied food, relying on resources that included the Center for Ecoliteracy’s discussion guide to the film Food, Inc. And eighth graders were introduced to a new unit on climate change and held a mock international climate summit in which they sought consensus on policies they could implement to reduce carbon emissions.

In upper-school classrooms, Asian studies teacher Saya McKenna and comparative politics teacher Karen Bradley collaborated on a project that examined the local impact of U.S.-China trade policies. Students watched Annie Leonard’s The Story of Stuff, discussed the environmental impacts of consumption, and visited a waste transfer station to see what eventually happens to all our stuff. Eleventh graders compared the fate of Easter Island, where the population collapsed after overreaching the limits of sustainability, to that of Tikopia, where people faced the same challenges but saved themselves by such means as limiting population growth and adopting sustainable agriculture practices.

Reflecting on the explosion of teaching and learning that interwove diversity, globalism, and sustainability throughout the school’s K-12 curriculum, Crystal Land observes that the very idea of integration proved to be a welcome one for teachers:

“There was much greater buy-in from teachers when the focus was on integration rather than the usual, `Oh, what’s it going to be this year?'”