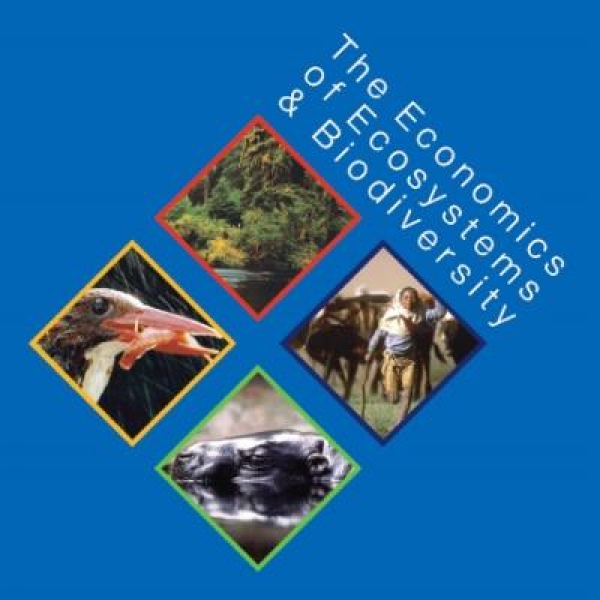 The history of post-War economic growth has been one of unsustainable consumption: unsustainable for the planet’s ecosystems, for its species diversity, and indeed, for the human race. By some recent yardsticks of sustainability, our global ecological footprint has doubled over the last 40 years to the point that, if the whole human population consumed at this rate, we would need 4-5 planet Earths just to keep up, just to sustain us.

The developed world we have disconnected ourselves from nature and are struggling to find the “value of nature.” Nature is the source of much value to us every day; this can be spiritually, culturally, health-wise or economically; and yet the benefits we receive from nature mostly bypass markets, escape pricing and defy valuation. The lack of valuation has become an underlying cause for the observed degradation of ecosystems and the loss of biodiversity.

The Economics of Ecosystems and Biodiversity (TEEB) is an international initiative that aims to draw attention to the global economic benefits of biodiversity, to highlight the growing costs of biodiversity loss and ecosystem degradation. TEEB brings together expertise from the fields of science, economics and policy to help them with their proactive approach. After the successful launch of the TEEB series of reports at the COP-10 meeting in Nagoya, Japan, the group has been active in many parts of the world and has decided to report back:

The TEEB Advisory Board met on 4 February 2011 in Brussels, Belgium to review proposals for the next stage of TEEB implementation (referred to as ‘TEEB Phase III’). Board members agreed to extend the TEEB initiative at least until the Rio+20 Conference and COP-11 meetings in 2012. They envisaged adding further members to the board from business, communications and civil society sectors to enlarge its representation and expertise.

Bringing communication into the equation

For TEEB Phase III, the Advisory Board recommended a ‘facilitation’ approach whereby the TEEB office and partners would draw on the TEEB community of experts in order to respond to a range of end-user demands. In particular, TEEB Phase III focuses on the following three areas: policy, business, and communications/outreach. The objective of Phase III is to mainstream TEEB beyond the biodiversity policy sphere while ensuring scientific credibility. Regarding structure, it was agreed that a ‘distributed secretariat’ serves TEEB’s future best, which led to getting an office in Geneva, Italy.

A number of national and regional TEEB assessments are being initiated. The following provides a snapshot of some of these efforts:

The TEEB India project was launched on 10 February 2011. It will be hosted by the Indian Ministry of Environment and Forests, but conducted through an independent structure.

The project will focus on the development of a framework for assessing the economic value of India’s natural capital with a distinct three-pronged approach:

To drive forward the TEEB for business work-stream, ICAEW Institute of Chartered Accountants in England and Wales (ICAEW) together with a large institutional coalition including IUCN, WWF-UK, the Global Reporting Initiative and a number companies is creating a common platform (a ‘TEEB for Business Foundation’) to catalyse research and action on corporate externalities. Among other things this includes implementation and standardisation of measurement and disclosure as well as engagement on public policy reforms.

Workshops organized across the globe

As part of a TEEB communications and outreach initiative, a series of national and regional workshops were organized across the globe to facilitate capacity building for practitioners (from national, regional and local administrations, business sectors, and consumer organisations) and to propagate the results of TEEB Phase II. There was a particular focus on developing countries with global biodiversity hotspots and on countries which have significant fiscal/aid allocations for biodiversity and ecosystem conservation. The workshops aimed to contribute to the development and implementation of strategies, policies, and decisions that lead to a better management of biodiversity and ecosystems and ultimately positive social and economic impacts.