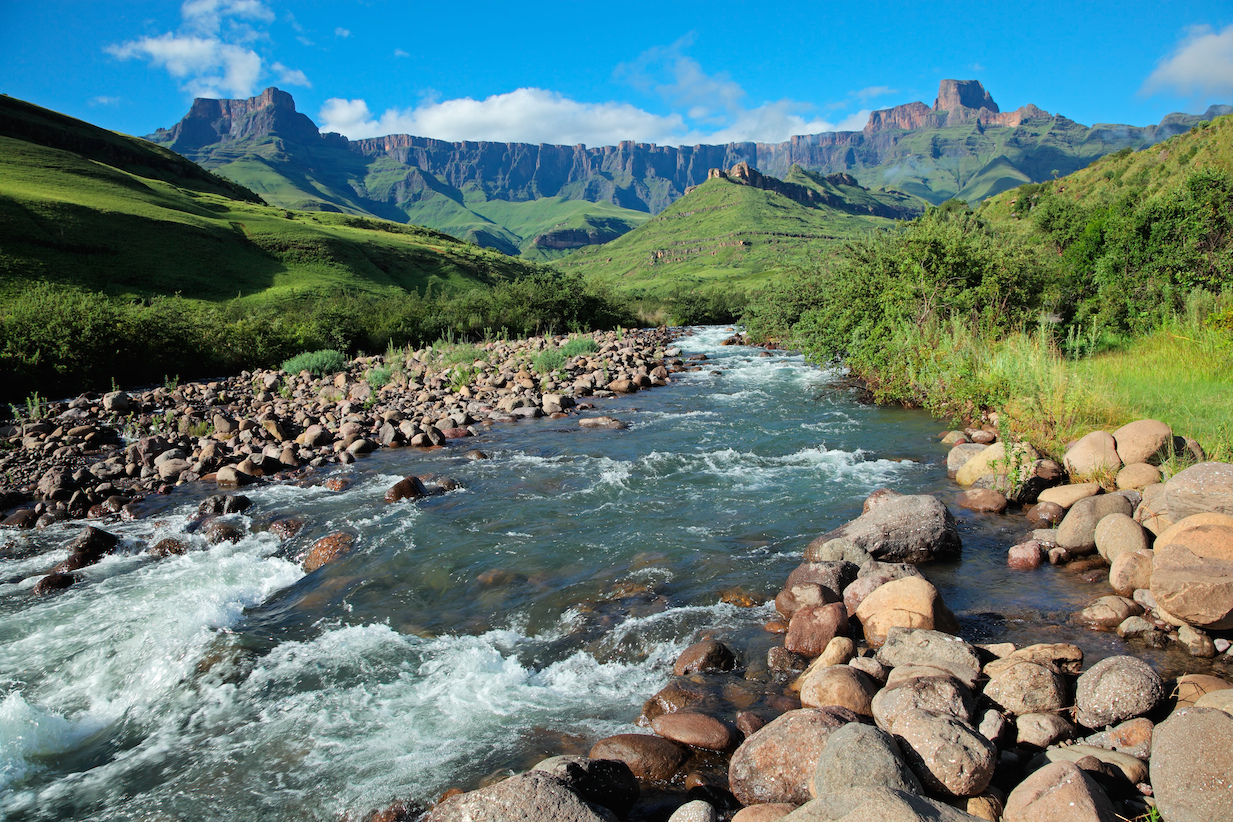 Natural landscapes provide ecosystem services to the country that have considerable economic value, like the water catchment services provided by the high-altitude grasslands in the Drakensberg Mountains. Image: EcoPrint / Shutterstock

Healthy natural landscapes such as veld, wetlands, rivers, and estuaries across South Africa generate value to the economy amounting to at least R275 billion per year, a new study by economists at the University of Cape Town (UCT) has found. This is equivalent to at least 7% of the national gross domestic product (GDP), or three times the annual combined value generated by the agriculture, forestry, and fisheries sectors.

This is only a partial estimate of the value of the country’s natural capital, says Dr Jane Turpie, lead author on the study and a resource economist from the UCT School of Economics.

The study focuses on a number of values generated directly or indirectly from nature, through providing South Africans with a range of natural products or services. These contribute indirectly to economic production through services such as regulation of water flows, or through their contribution to cultural values such as recreation and tourism gained from natural vegetated landscapes, rivers, wetlands, and estuaries.

This includes the provision of forage for livestock and game farming, carbon storage in trees and soils, pollination of agricultural crops by wild insects and birds, the slowing down of freshwater flows and improved water quality. The economy also benefits from the income derived from the increased property prices and higher municipal revenue earnings associated with properties that are nearer to picturesque natural spaces such as beaches. Tourism income is also linked closely with unspoiled natural beauty such as that found in nature reserves. Meanwhile, poorer households derive considerable value from harvesting food, medicines, or materials such as thatch or firewood from the natural veld.

‘This 7% figure is a preliminary and partial estimate of the economic value to some of the goods and services offered by the country’s natural systems,’ explains Turpie, whose findings were published recently in the journal Ecosystem Services.

‘There are still many gaps to be filled, including the value of the oceans, or of the contribution of ecosystems to the whole value chain.’

The purpose of the study, however, was not to produce a single, impressive-looking figure of the combined market value of the goods and services offered by South Africa’s biodiversity and healthy landscapes.

‘The intention was to stimulate research and thinking towards the development of ecosystem accounts for South Africa, starting with what we currently understand from the information that’s currently available to us,’ Turpie explains.

The South African government recently committed itself to developing an accounting system that takes natural values into consideration. These will eventually be used in conjunction with conventional national accounting measures, such as GDP, to provide policymakers with a better understanding of the economic and social consequences of the impacts on ecosystems, and help to guide a more sustainable development path, says Turpie.

‘The real value of this kind of exercise will be felt through continued accounting and assessment of changes over the longer term,’ she says. ‘We believe that it will highlight the benefits of keeping different ecosystems healthy, so that they can continue to deliver these services to the benefit of South Africans.’

‘We have specifically omitted water and crops from this study, as we’d rather consider how remaining natural systems reduce the costs of their supply. We have also purposely taken the perspective of looking at the value to us locally, and specifically to the South African economy. If we included the value of our carbon stocks and wildlife to the rest of the world, for instance, our estimates would be orders of magnitude higher.’

Policy makers need to respond by ensuring these systems are protected, especially since the very activities which give them such value are often the same activities which undermine them in the long-term. For instance, many estuaries along the coast are losing their potential as fish ‘nurseries’, as over-extraction of river water upstream of the estuary means there isn’t enough fresh water flowing out into the sea to allow for estuarine fish stocks to thrive. Recreational fishing in estuaries by anglers has also undermined fish stocks in these important nursery areas.

This study also shows the importance of understanding spatial patterns in the value of ecosystems, and how these relate to human populations, as well as natural characteristics.

‘This provides a clue as to the dynamic nature of ecosystem values and strongly suggests that many of our policies should be more spatially-oriented.’

It is not always easy to attach a rands-and-cents value to some of nature’s services, particularly these regulating services come from landscape-scale processes. These are the areas in which understanding is particularly limited, and where values may be far higher than the authors of the study initially estimate.

‘It will be important to develop better models that show how changes in land use and ecosystem health affect these services, and how this impacts on society, and eventually to track these effects empirically using monitoring data,’ explains Turpie.

Natural systems soften the blow of water damage during floods, and stop sediments and agricultural pollutants from washing down into rivers and dams. This, in turn, saves on the costs of developing new dams and stormwater infrastructure, and on the costs of treating water for human consumption.

Some ecosystem service values have not been included in this study, such as the the value of protection against storm surges offered by coastal dunes and mangroves, and the effects of ecosystems and natural features on local climate.

Similar future studies will need to estimate how the trees in South African city streets and parks dampen temperature extremes during heat waves both by providing shade, and through the cooling effect of evapotranspiration. ‘We also haven’t included other services such as the cultural value attached to harvesting natural resources, keeping cattle, and using rivers for cultural and religious rituals.’

Turpie says while some of these types of values may be best left un-monetised, they should nevertheless ‘not be forgotten’.

‘Our future calculations will also need to include the value of maintaining a source of genetic material for the cut flower and rooibos and honeybush tea industries, which have developed from the unique biodiversity of the Cape Floral Kingdom, and bring in approximately R800 million and R150 million each year.’

This preliminary study will allow researchers to draw up a more comprehensive overview of the total value of nature’s services in future, as well as allowing them to identify important knowledge gaps in the field.