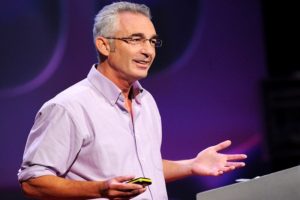 “Every one of the planetry boundaries is trending in the wrong direction – we need to go for a radical transformation,” says Peter Bakker in the overview of the key themes of the Cambridge Distinguished Lecture Series 2013, What it Takes to Seed a Sustainability Revolution. This featured accessible lectures by leading sustainability thinkers.

Peter Bakker begins with a diagnosis:

‘In all these forty years that the world has been focusing on sustainability, and in all the twenty years that the World Business Council for Sustainable Development (WBCSD) has been playing around with sustainability, there is one remarkable conclusion: every one of the planetary boundaries is trending in the wrong direction. Nothing is trending in the right direction.’

The obvious implication, says Bakker, is that we need to go for a radical transformation.

Reflecting on the changes needed to our economic system, Tim Jackson (pictured, above) reaches a similar conclusion. ‘This is not just about tinkering at the edges. It’s not just about taking the existing system and saying, could we internalise the externalities, use a carbon tax, make sure the markets are working effectively, reduce moral hazard, or encourage financial markets to involve themselves in green technologies. This is what we’ve had for 20 to 25 years and it hasn’t worked.’

Jackson believes that underlying our modern view of economics are social and institutional dynamics that are fundamentally wrong. ‘They start from the wrong place, they use the wrong vision of who we are, they create the wrong impression of relationships, and they have caused havoc, not least through the recent financial crisis. The only remedy, says Jackson, is ‘structural reform at the deepest level, without which we simply cannot get economics for a finite planet.’

From net zero to net positive

John Robinson agrees that the system is broken, but he thinks that we are telling the story wrong. The message of sustainability over the past forty years has been ‘all about limits and constraints’, which ‘is not a very effective societal narrative,’ he says. ‘In fact it’s deeply dysfunctional as a way of thinking about sustainability.’ Robinson sees two big problems with the way sustainability has been communicated as ‘a story about harm reductions, damage limitation, mitigation, cutting back and sacrifice.’ The first is a procedural problem: it’s not engaging to people.

“People do not jump on the bandwagon of sacrifice. They don’t leap to the forefront of the social movement for cutting back and doing without. It’s just not engaging to people.”

This is a big problem. It’s a problem because sustainability implies a societal transformation at a fairly deep level across the whole planet and if we can’t find a language that interests people and engages people then we’re in big trouble.’

The second problem is more substantive: limits and constrains don’t go far enough. ‘If you’re talking the language of harm reduction,’ says Robinson, ‘then the end point is zero harm. If you’re talking the language of damage limitation, the end point is zero damage, what we might call net zero in the parlance of the built environment and a lot of sustainability discourse. This is not good enough. We cannot limit ourselves to simply not doing harm. We have to find ways to make things better.’

To answer the first question, Robinson started the Centre for Interactive Research on Sustainability (CIRS), a living demonstration project that has, over the past ten years, shown that regenerative buildings are not only possible, but also economically preferable. CIRS is designed to be net positive in energy, operational carbon, water quality and structural carbon. They have already shown that, by adding a 60,000 square foot building to the University of British Columbia’s campus, they are reducing the University’s energy use and carbon emissions. Besides being 100% rainwater supplied, the water leaving the building is cleaner than the rain landing on the roof, in terms of some key environmental parameters like sulphur and particulates. So the building acts as a giant filtration device, improving the quality of the water flowing through the site.

This positive approach is shared by Mike Biddle. When confronted with the fact that we consume 265 million tons of plastic every year around the world, of which around 90 per cent lands up as non-recycled waste, his conclusion was: ‘That says, problem, but it yells opportunity.’ The opportunity is not only for creating environmental benefits and less hazardous materials, but also for creating economic value. After all, compared to steel, plastics on a price per weight basis is three to four times more expensive than steel. And we consume, around the world, more plastics, on a volume basis, than steel, each and every year.

The problem has not been the inherent value of plastics waste, or even the comparative profits to be made from virgin oil extraction, but rather the challenge of separating and reconstituting different types of plastic from the mountains of post-consumer waste. However, this is a code that Biddle’s company, MBA Polymers, has cracked, allowing them to recover and recreate 100% recycled plastic at their plants in China, Austria and the UK.

Despite technology success stories like the CIRS and MBA Polymers, all of the distinguished lecturers cautioned that the hardest part of creating change are the non-technical barriers.

At a macro level, Jackson observes that the economic, social and institutional dynamics of the system work against the progress that we’re looking for. Moreover, these dynamics use the wrong vision of who we are. ‘Wherever you look,’ says Jackson, ‘we are coding economics for an infinite planet into the market and its institutions. We are suggesting that human beings are novelty seeking hedonists who are out and born to shop.’

At an operational level, Robinson illustrates the non-technical barriers using water as an example. Their CIRS has installed a solar aquatics facility that treats their own sewage inside the building. However, it took ‘a year of fighting through all of the byzantine bureaucracy of health and safety on water treatment’ to get the necessary approval.

‘That’s an institutional barrier,’ he notes. ‘It’s not a technical barrier. It hadn’t been done so there had to be a way of demonstrating that this really would work.’ To emphasise the point, Robinson explains that, despite their treated water being cleaner than rain water, they are not allowed to use it to irrigate their grassed roof because the institutional and regulatory category of water into which it falls – reclaimed water – doesn’t allow that to happen.

Moving to a circular economy

Despite these sorts of non-technical challenges, Biddle’s business makes a compelling case for moving to a circular economy. He explains that, ‘much like aluminium recycling, instead of plopping down hundreds of millions of dollars to build a petrochemical plant that will only make one type of plastic for its entire life, our single plant can make any type of plastic, basically whatever we feed it, because all we’re doing is separations. By doing that, our customers save between one and four tons of CO2 for every ton of virgin plastic they replace. Our customers get to close the loop and they make more sustainable products, so they get green marketing benefits. They buy our plastics that are usually lower cost than virgin and they get to secure their supply chain and the raw materials needed for the future of manufacturing.’

Jackson extends the idea of a circular economy to the ‘economics of a finite planet’. Making this transition happen depends on reforms in four areas.

We need the following:

One example of this different approach to economics is the Yasuni project in Ecuador, which is about encouraging people to invest in keeping oil in the ground, in order to protect areas of high biodiversity.

A revolution in capitalism

Bakker, a self-declared and very successful capitalist, believes that we are looking at nothing short of a revolution in capitalism. He suggests that there is one fundamental flaw in capitalism: ‘All we do is we measure and we manage and we optimise the return on financial capital – and we do not care about anything else’. He believes the world will not move away from capitalism, but we will need to change the rules of the game.

“In future, a capitalist will not just manage financial capital but will also manage natural and social capital and optimise the return across all three. That’s what I call a revolution of capitalism.”

Bakker believes there are three seeds for such a revolution.

Robinson believes there are four verbs – things we have to do – if any change, especially at the cultural level, is to be successful.

It’s not about impossibility, it’s about ideological change

So is a revolution in capitalism a utopian dream or something that can be achieved? Jackson believes the economics of a finite planet are possible: ‘Can you maintain employment in a non-growing economy? Yes. Can you create a vision of enterprise that allows for sustainability and improves people’s quality of life? Yes. Can you create an investment framework that give patient capital a chance to allow us to invest in the assets that we need for future prosperity? Yes.’

Jackson believes that ‘it isn’t about impossibility. It’s about ideological change. It’s about building the institutions, from the bottom up if necessary, that create a different model of economic systems built around principals that are more closely aligned to who we are as people and with our own long term prosperity.’

Toss the toddler rules by which society is living

According to Biddle, we will know we have succeeded when we change the ‘toddler rules’ by which society is still living, namely:

‘Really,’ he concludes, we’re just borrowing stuff until someone can use the resources that we borrowed in one form and use them in another form later. Therefore, I hope you agree to change that last toddler rule especially: if it’s broken, it’s our stuff.