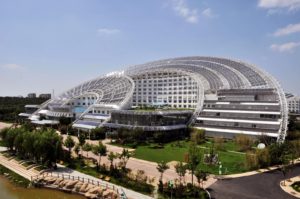 In a new report titled Regenerative Cities, the World Future Council (WFC) called today on national governments at the UN Climate Change Conference in Cancún to enable their cities to take vigorous measures to deal with climate change.

“Cities must be the focal point of action in the global effort to reduce global warming”, WFC Co-Founder Prof. Herbert Girardet said in an official press conference at the UN climate summit.

“Cities also must be enabled by national governments to reduce their vast consumption of energy and materials and to minimise their waste discharges, which put enormous pressure on the Earth’s climate and ecosystems.” According to the organisation’s statement, cities use 80% of global energy and materials.

“Cities are at the heart of economic lives and they need active support to build resilient future-proof economies”, Prof. Girardet continued.

The Hamburg-based organisation stated that the majority of positive examples are ratherstand-alone solutions or state-financed prestige projects. In their report the WFC and an expert commission of 30 internationally acknowledged climate scientists, city planners and architects suggest 38 measures for ‘regenerative’ urban development. Not only well rehearsed measures such as energy-saving buildings or the expansion of renewable energies, but also sewage reprocessing, the use of composted bio-wastes in peri-urban agriculture and large scale tree planting schemes for carbon sequestration are part of the proposed solution.

“Whilst it is crucial that the climate negotiations need to agree upon emission reduction targets and concrete mitigation measures, governments mustn’t continue to ignore the role that cities need to play in this endeavour”, affirmed Prof. Girardet. In the report the WFC states that global urbanisation is increasing without the existence of an appropriate concept for sustainable urban development. According to the WFC one of the main causes of that is a lack of awareness among national governments and urban policy-makers.

Given the key role of cities in global climate and resource protection, the World Future Council called for the creation of national governmental bodies as well as national action plans for sustainable city development.

“The city of the 20th century, the Petropolis, is a linear, open-loop system that receives goods linearly and discharges waste linearly. In contrast, the city design of the 21st century has to be an Ecopolis, meaning that it operates a circular ‘urban metabolism’ that incorporates circular flows of biological and technical resources. The Ecopolis will receive many of its key resources, including energy resources, from its local hinterland. The nutrients that it detracts from nature are returned by clever waste management systems. Renewable energy sources close to cities, a dramatic increase of energy efficiency measures as well as urban agriculture, avoid emissions and in addition create jobs in the city centres”, delineated Prof. Girardet.

The World Future Council brings the interests of future generations to the centre of policy making. Its up to 50 eminent members from around the globe have already successfully promoted change. The Council addresses challenges to our common future and provides decision-makers with effective policy solutions. In-depth research underpins advocacy work for international agreements, regional policy frameworks and national lawmaking and thus produces practical and tangible results. The World Future Council is registered as a charitable foundation in Hamburg, Germany.