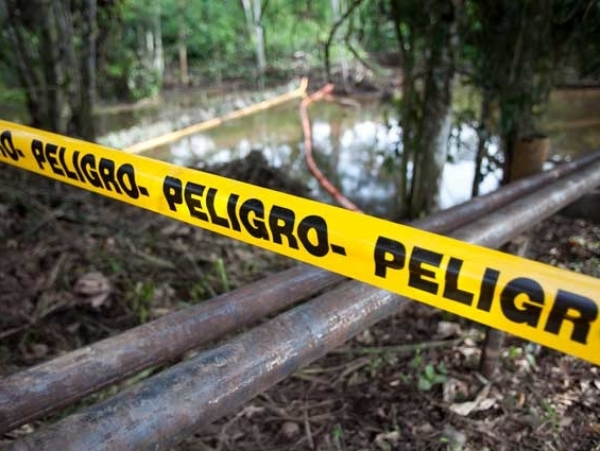 An oil spill from Ecuador’s Trans-Andean pipeline last weekend has reached Amazonian tributaries and is wreaking havoc on local communities and ecosystems downstream.

The 420,000-gallon spill came after a landslide wiped out a 100-meter stretch of the pipeline near the Reventador volcano on the eastern slopes of the Andes. The crude quickly made its way into rivers and streams, and by Saturday night, had reached far down the Napo River – the headwaters of the Amazon. The Kichwa community of Sani Isla – involved in their own fight to keep oil extraction off their lands – reported black crude floating on the river banks.

The spill left the major port city of Coca without water, and indigenous peoples and farmers along the Napo river and its tributaries who bathe, drink, and fish from the river, scrambling. Coca Mayor Ana Rivas told the Sonarama radio station that the spill “has left us without water because the river we take potable water from is contaminated. The people are indignant because there is no water to drink.”

Peru’s Ministry of the Environment and Ministry of Foreign Affairs are reporting that the oil slick has crossed into Peruvian territory, and that 32 indigenous communities in the northern province of Loreto are affected. The Brazilian government, worried that the oil will flow into Brazil, has held high-level contingency meetings.

The pipeline is operated by Petroecuador, the country’s state run oil company, and carries crude by Petroamazonas, also a state run company charged with exploration and production.

The pipeline has been a frequent source of spills over its 40-plus year history, with the most recent spill in April. It was built by Texaco and completed in 1972, and like all of Texaco’s Ecuador operations (Chevron acquired Texaco in 2001), it was done on the cheap. Choosing to save money, Texaco chose a pipeline right of way that was shorter and thus cheaper, but passed through some of Ecuador’s most geologically complicated and seismically active areas. The pipeline spilled 16.8 million gallons alone during Chevron’s 28-year tenure. Like its operations at its well sites, Chevron knew there was a right, and safer, way to operate but chose profit over people.

The spill, the latest in a series of setbacks for the government, does not bode well for Ecuador’s plans to expand oil drilling to other parts of its still-pristine southeastern Amazon.

Indigenous resistance to the government’s plans to turn the southern Ecuadorian Amazon into a series of oil blocks forced the government to take five of the original 21 blocks off the table. In March Ecuador reduced expectations even further by saying that it was expecting bids on only six to ten oil blocks.

Last month, presumably because it had not received enough interest from potential bidders, the government extended the deadline for companies to offer bids. Two days later, Wilson Pastor, the minister in charge of the oil round, announced his resignation. The indigenous communities are unwavering in their fierce resistance to the auction, much of which comes from oil’s toxic legacy of contamination in Ecuador.

The current spill serves as a fresh reminder that despite promises of best practices and state of the art technology, in the Amazon it’s a question of when, not if, there will be a spill.

It’s also a stark reminder that Peru is subject to downstream contamination from any spill sin Ecuador, as the headwaters of the Amazon begin in Ecuador and flow east through Peru. Five Amazonian rivers flow from Ecuador in Peru, and, in some cases, into Brazil. After last weekend’s spill, one can only hope that the Peruvian and Brazilian governments are asking Ecuador some very serious questions about its new oil round.