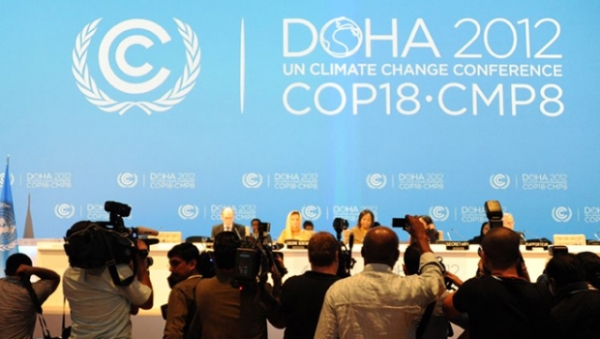 As international climate change negotiations are renewed, South African Faith Communities’ Environment Institute (SAFCEI) is calling on our government to turn to policies driven by science and ethics, not political and economic expediency; and to expand South Africa’s own renewable energy revolution.

Scientists have recently revealed that the damage from climate change is advancing faster than their worst previous projections. We are on track now for 6-7 degrees of average global warming by 2100 – but just two degrees of average warming will be disastrous for Africa. Superstorm Sandy’s assault on New York showed just how vulnerable even highly developed countries are to extreme weather that is most likely worsened by climate change.

Meanwhile, Germany’s Energiewende (lit. ‘energy shift’) shows it is possible to maintain a healthy economy while adopting a progressive energy path. Germany has notched up 36% growth since 1990 – reducing its total energy use and carbon emissions.

Nuclear energy not a viable solution

It has also recently been revealed that government’s own comprehensive internal review of South Africa’s nuclear power readiness turned up very serious capacity challenges, making it clear that nuclear energy is not a viable climate change solution for South Africa. Nor can South Africa easily find R300billion to fund it.

South Africa is currently represented at the annual pilgrimage to the UN Framework Convention on Climate Change’s annual Conference of the Parties (COP 18), in Doha.

SAFCEI represents many people in the faith communities who believe that it is impossible to claim a love for humanity if we do not act to preserve the Creation that makes our lives possible.  The moral and practical case for urgent action on climate change has not weakened since COP 17 in Durban. It only grows more urgent, convincing and expensive as we delay action.

As faith communities, we are inspired by the universal principles of loving our neighbour and all life. The ehtical choice for South Africa is not to wait for the world to act on climate, but to make bold decisions right now. Germany’s example shows that ethical decisions, far from being impractical, have a remarkable tendency to work out practically and economically.

Coal, gas and uranium are not blessings

Our Energy Minister, Dipuo Peters, is on record as having said that it is our responsibility to make the most of our coal, natural gas and uranium reserves as they are God’s gifts.

SAFCEI knows their desire is for these resources to help the prosperity of all South Africans. But history shows that dependency on extractive industries for economic development usually fails. The ‘resource curse’, the tendency for countries ‘blessed’ with rich mineral resources to fall victim to extreme inequality and corruption is well recognised by economists and is an underlying cause of the awful and tragic massacre at Marikana.

It is spiritual resources, the resources of minds and hearts, that we must develop most. Even if South Africa were to exploit all our coal, gas and uranium, at some point these will be exhausted. Do we bequeathe to future generations an even more tragic dependency on them and a planet with an unpredictable climate?

An alternative energy plan for SA

It is the responsibility of those who urge challenging alternatives to show that they are possible. SAFCEI supports the Electricity Governance Initiative of South Africa (EGI-SA). EGI’s Alternative Energy Plan will detail how an carbon-free future for South Africa can be constructed.

As COP18 gets underway, we call on government to take, amongst others, these actions at home and in the negotiations:

SAFCEI is the Southern African Faith Communities’ Environment Institute, people of many faiths in Southern Africa, united in our diversity through our common commitment to earthkeeping, and to supporting the faith communities in fulfilling their environmental and socio-economic responsibility.