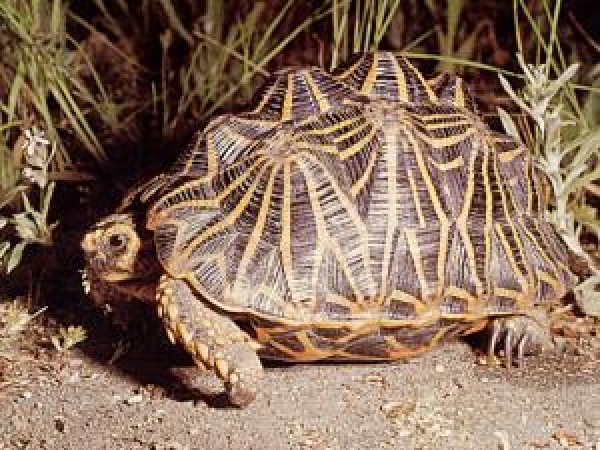 Some experts say the world is heading for the “sixth extinction.” Unlike the five separate mass extinctions millions of years ago, this one will be caused not by natural events, but by a single species: humans.

To highlight the biodiversity crisis, the IUCN and London Zoo published a report identifying the 100 most threatened species on the planet. Four are found in SA. Melanie Gosling looks at the threats facing these four, and what is being done to pull them back from the brink of extinction.

It was bad luck that the geometric tortoise evolved to live in those areas that later became attractive to farmers.

As a result, most of the tortoises’ home range fell under the plough ages ago, and they are hanging on in three small pockets of protected land in the Boland: the nature reserves of Elandsberg, Voelvlei and JN Briers Louw.

90% of their habitat destroyed

Their historic distribution started off small, confined to renosterveld and alluvium fynbos in the Swartland, around Ceres and in the upper Breede Valley. To date, 90 percent of this vegetation has been destroyed.

In January this year, some students lit a braai fire on the Wolsley side of Bainskloof in a howling south-easter. It swept over the mountains and burned for two days, devastating the Elandsberg Nature Reserve, home to 80 percent of the world’s population of these tortoises.

CapeNature launched a rescue operation, collected 60 that had survived and kept them in an enclosure to help them recover. They are not sure how many finally made it after release, and next month they will return to do a survey.

Ernst Baard, head of scientific services in CapeNature, said yesterday a large proportion of the population had been wiped out. “I’m really concerned that one incident could push the population to bordering on being extinct in the wild. My best calculation is that the area they occupy is down to 22km2, that is the world distribution, which in itself places it in the critical endangered category.”

There is only one way to ensure its survival, says Baard, which is by securing as much of the remaining lowland habitat in the Western Cape as possible, either by buying it or through a system of “conservation stewardship” with private landowners. As the state does not have the money to buy sufficient land to conserve species – the tortoise or any other – the future of many species lies in the hand of private landowners.

“We really need to convince farmers to keep every little pocket-hanky of renosterveld, and to conserve it by keeping aliens out and fire. Private landowners are the only long-term solution for the survival of the geometric tortoise.” For more general tortoise info, click here.

searching for the wild yams

It is thought to be millions of years old, but the wild yam was unknown to science until 13 years ago.

They named it Dioscorea strydomiana and it is the most threatened yam in the world. It grows in only one place on the planet: a rocky mountain slope in Mpumalanga, where just 253 exist. It’s a palaeoendemic, a species that was probably wider spread in prehistoric times, but is now restricted to a small area, a remnant of the past.

While scientists did not know of its existence until recently, traditional healers in Mpumalanga did, and have used it for medicinal purposes. Now the medicinal trade poses the greatest threat to this slow-growing species.

Mervyn Lötter, acting manager of biodiversity planning for Mpumalanga Tourism and Parks Agency, said yesterday: “We’ve got a strong desire to protect it. It’s got male and female plants and fits the model of a palaeoendemic, where the environment around it changed over time, and these remnant plants remained. It’s old. It rather resembles a cycad.”

Botanist Gerhard Strydom stumbled across it in a muti market, when he was monitoring the medicinal plant trade. He asked the traditional healers to take him to where it grew.

Some years later, Paul Wilkin at Kew in London described the species and named it after Strydom, who had died suddenly of cancer.

“Unfortunately the way the healers harvest it, is to cut off bits of the thick stem and that’s not sustainable. The plants are losing their vigour. You used to see old flower spikes on the plants, but very few are flowering or fruiting these days. Luckily, some of its seeds were successfully banked at Kew in the Millennium Seed Bank project. It doesn’t grow very well. It germinates fairly easily but then dies off. We’ve been looking at strategies to protect it… it appears to be on a continuous decline,” Lötter said.

As the Mpumalanga Tourism & Parks Agency conservation authority is cash-strapped, the SA National Biodiversity Institute (Sanbi) has given Lötter temporary funding to monitor the plants monthly and he has begun to record each one’s GPS position.

They are now looking at a “holistic strategy” to save the yam, working closely with Sanbi’s threatened species unit, the Walter Sisulu and Lowveld National Botanical Gardens, Wits, the Mpumalanga Plant Specialist Group and Kew Gardens.

“We’ve also got a master’s student who’s looking at the medicinal trade within the area, because you can’t look at conserving the plant without looking at its use and those who depend on it. We need to establish the socio-economic context.”

the return of the pipefish

When Paul Cowley was doing surveys of Eastern Cape estuaries for his doctorate in the 1990s, he came across a pipefish and popped it in a bottle to identify later.

“When I did, I thought: ‘Oops. This is an extremely rare fish’.”

It was in fact a species of pipefish thought to be extinct. Cowley, the principle aquatic biologist at the SA Institute for Aquatic Biodiversity in Grahamstown, had discovered a surviving population in the East Kleinemonde estuary.

This pipefish, Sygnathus watermeyeri, used to occur in six Eastern Cape estuaries. It is now believed to have disappeared from five.

It’s a relative of the seahorse – “without the kink in its tail” – and like the seahorse, it is the male that gets pregnant. After mating the females deposit the eggs in the male’s pouch and leaves him to carry them to term.

But after the exciting find of the “extinct” pipefish, the population in the East Kleinemonde were wiped out in a flood in 1998.

“We suspect there is a residual population in the West Kleinemonde, but at the moment if would be a tough challenge to find one,” Cowley said.

A colleague did another survey to look for the pipefish and found some in the Kariega Estuary – after an absence of 40 years. “The population is still very vulnerable. They’re vulnerable to freshwater abstraction, and in open estuaries in the drought years it becomes too saline.”

Cowley believes the future of the pipefish hinges to a large extent on how the people who live in the estuaries look after them. “But they want properties running right down to the water’s edge and big ski boats. With the whole development boom people don’t care a stuff about estuaries.”

The Eastern Cape’s Department of Economic Development and Environmental Affairs did not reply to questions about how it planned to ensure the species did not become extinct.

ghost frog hails from the mountain

Some say the Table Mountain ghost frog is so named because it was first found in Skeleton Gorge. Others say it is because of its haunting call.

Whatever the origin, its name is an eerie reminder that this creature faces extinction.

Their entire world distribution is restricted to less than 10km2 on Table Mountain, probably in no more than five or six streams that flow all year round. The frog also lives away from streams in dark kloofs and mossy cliffs, is highly secretive and seldom seen.

Although its entire home is in the Table Mountain National Park, its future is far from secure. Its habitat is threatened by invasive alien vegetation in stream catchments, by erosion in gorges and ravines, and by water abstraction. When two dams were built on Table Mountain over a century ago, much of their habitat was destroyed. Fortunately streams flow continually below the two dams and these two streams make up 60 percent of the frog’s breeding habitat. Park staff say they are almost impossible to monitor as 70 percent of their habitat includes steep, rugged, inaccessible terrain. Most of the monitoring is focused on their tadpoles.

Before the land became a national park, CapeNature monitored the ghost frog, and continues to do so in partnership with SANParks.

“So it is very important that the stream remains flowing all year, and no dams are built or anything done to reduce the flow or stop it. That is crucial. In winter months when the water flows strongly, the tadpoles attach themselves to rocks by suckers so they don’t get washed away. The other thing is to keep the area free of aliens,” Baard said.

Another threat on the horizon is climate change.

“If it gets drier and warmer, with less rain, I believe the Table Mountain ghost frog will be one of the first candidates for extinction.”