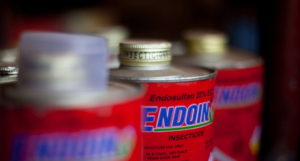 Last Friday in Geneva it was agreed and announced that Endosulfan was too toxic to have on the planet. The Air That I Breathe (TATIB) Foundation, founded in Stellenbosch, has thanked their South African supporters for their commitment and endurance. After extensive review and debate, and years of work on behalf of especially the chairman, Jurgen Schirmacher, the chemical pesticide has finally been banned globally.

Thumbs up to Jurgen and the committee for their relentless and selfless dedication to the cause of cleaning up our agricultural practices from toxic substances. The benefits of their hard work will be ongoing on this planet. Endosulfan is an organochlorine that accumulates in the environment and in the bodies of people and wildlife (it’s stored in the fatty tissues of mammals, accumulating up the food chain – it’s even present in mother’s milk), and is transported around the world to remote places via wind and currents.

Harm may result from direct exposure during handling, spray drift, washing contaminated work clothes, storing pesticides in the home or indirectly via pesticide dumps and persistence in the environment. Endosulfan is toxic, especially if inhaled or swallowed and can damage the kidney, liver and male reproductive organs. It is a hormone disruptor and studies have shown that it increases the risk of breast cancer. In some cases long-term exposure can also cause death.

Endosulfan kills sucking and chewing insects such as aphids, thrips, beetles, caterpillars, mites and tsetse flies. It is used mostly on vegetables, melons, apples and cotton and causes extreme harm to farm workers and wildlife, particularly fish and birds. Nearly all organochlorine pesticides (such as DDT) have been banned.

In March 2007, the Chemical Review Committee of the Rotterdam Convention on the Prior Informed Consent Procedure (PIC Convention) recommended the inclusion of Endosulfan in its Annex III. Annex III is the list of chemicals that have been banned or severely restricted for health or environmental reasons by Parties to the Convention. In July 2007 the Council of the European Union (EU) decided to propose Endosulfan for listing in the Stockholm Convention on Persistent Organic Pollutants (POPs Convention) for global elimination.

One of the driving forces behind the global ban was a long campaign by The TATIB Foundation, with the help of among others, the Pesticide Action Network, Thanal and the Environmental Justice Foundation. They used scientific evidence to highlight the threats posed by Endosulfan. In South Africa, TATIB’s chairman, Jurgen Schirmacher has been campaigning for the last six years to have Endosulfan banned for use on the vineyards, orchards and wheat fields of the Western Cape, following his family’s exposure to the deadly pesticide.

‘Every cent, every letter to government and every minute of volunteer time has helped to bring us closer to this: the end of the road for Endosulfan,’ Schirmacher says. ‘The decision to eliminate Endosulfan is a major victory for people and the planet.’

The global ban has powerful, real world impact: farm workers’ children all over the world will have fewer birth defects, autism will be less likely in areas where crop spraying occurs on an almost daily basis, fewer residents of rural towns in South Africa will suffer serious side effects following their exposure to spray drift.

Each country is now responsible for ending its production and use within their borders within the next year. Only three countries – India, China and Uganda – registered exemptions for uses to control pests on specific crops including cotton, coffee, onions, potatoes, chillies, apples and mangoes. Use and production in these countries can continue for another five years. Countries such as Brazil, Benin, Sri Lanka and South Africa are turning to environmentally friendly pest control, which has no negative impact on humans or the environment.