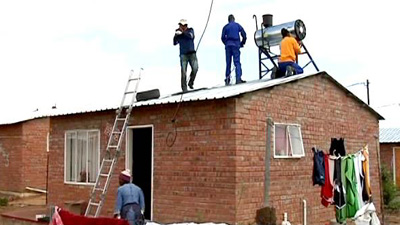 The National Energy Department has pledged about R12 million towards the maintenance of solar geysers installed in Galeshewe in Kimberley in the Northern Cape.

This emerged during Minister Ben Martins’ door to door visit to the area as part of a tour of energy projects that are currently under construction in the Northern Cape. He also embarked on a public engagement programme to listen to issues raised by residents.

Martins says that government is aware of the challenges regarding the geysers.

Most solar panels from China & Spain

“We’re very much aware of the time they were installed; most of the solar panels were imported from countries like China and Spain.”

Martins adds that those particular panels were designed for conditions in those countries.

The Minister indicates that a number of problems have been found with the panels and a program has been designed where local youth will be trained in order to maintain the panels. The project will also be overseen by the premier’s office.

Northern Cape Premier Sylvia Lucas says that they will make sure that they train enough people to maintain the solar geysers.

“ …they pledged that they have budgeted around R12 million as the Department of Energy, specifically for Sol Plaatjie over the MDF, which will enable us as the provincial government and enable Sol Plaatjie to have maintenance of these solar geysers.”

Lucas adds that the provincial government will ensure that there is constant maintenance of the solar geysers.