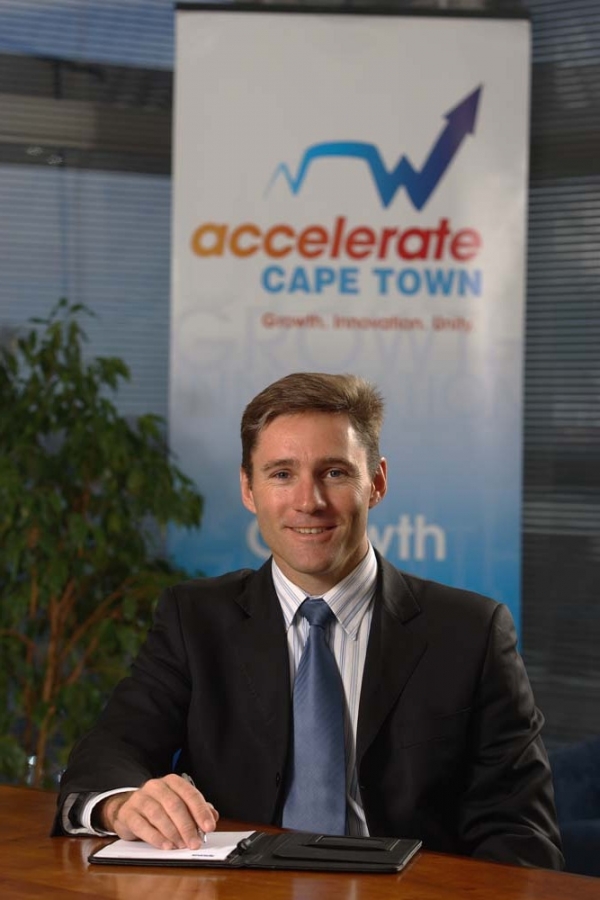 Accelerate Cape Town’s 48 member companies include some of the largest corporates in the country and a number of multinationals who have offices in the Western Cape.

Outgoing Accelerate Cape Town CEO Guy Lundy (pictured) said it was important for the regional business community to consider the importance of the role of renewable energy in making Cape Town a more competitive business hub globally. Lundy will be succeeded as CEO by former Ernst & Young executive Chris Whelan in July 2012.

Lundy said Accelerate Cape Town and sponsor company KPMG launched these quarterly Sustainability Forums two years ago, having found that the leaders and sustainability managers of large companies in the region often felt isolated and out of touch with what their peers were doing to address common issues. A regional forum to connect business leaders with similar sustainability goals therefore needed to be established.

As a prelude to the Forum, Accelerate Cape Town and KPMG acknowledged that the 2003 White Paper on Renewable Energy Targets calls for the energy equivalent of 4% of South Africa’s current energy consumption to be provided from Renewable Energy Sources by 2013.  One result of this is that business is now exploring the bottom-line viability of renewable energy technologies, and where they should be investing in such projects.

“As a business city, we need to look at our sources of power. If energy is to become more expensive over the next few years (with traditional energy source prices likely to rise dramatically), it will be harder to attract business to Cape Town,” Lundy said.

The Forum at KPMG was addressed by Professor Wikus van Niekerk, Director of the University of Stellenbosch’s Centre for Renewable and Sustainable Energy Studies (CRSES), Sarah Ward from the City of Cape Town’s Environmental Resource Management Department and Marvin Benjamin, City Account Manager at Siemens. Benjamin is responsible for business development across Southern Africa’s urban areas, including cities and municipal jurisdictions.

“CSP energy projects have significant job creation potential and are a very reliable energy source”, he said. By contrast, for example, setting up facilities in the ocean to capture wave energy is still costly, a safety risk to technicians, and entails the use of technology still under development.

Renewable energy industries had good growth potential, owing to government’s Integrated Resource Plan, the first commitment of its kind by government, he said.

“This is an exciting time for renewable energy in South Africa, but it is crucial that government makes it work. Independent power producers also need to come in on time and on budget. I am however particularly concerned about financiers’, and especially banks’, lack of support for renewable energy projects in this country. They don’t seem to believe in reliable renewable energy, but in time, I’m sure they will recognise the real viability of these projects,” Van Niekerk said.

The capacity to help

Benjamin said few people knew that Siemens has 150 years of history in South Africa.  Currently Siemens plays a role in 85 cities around the world, including Cape Town, in the area of sharing research on energy efficiency. In doing so, it partners with 10 South African universities for research purposes. Benjamin said Cape Town had a population of 3.8 million and the growing population was placing particular stress on road infrastructure and water supply. “Siemens has the capacity to help and share research,” he said.

Ward said that one of the ways that the City of Cape Town is addressing the issue of energy security is by setting a target to reduce energy consumption in the city by 10% by the end of 2012, and to obtain 10% of its power from renewable and clean energy resources by 2020.

Ward also said the city is looking at an optimum mix of renewable energy sources, with wind power displaying the greatest capacity for clean energy provision in the future.

When asked how business could assist the City of Cape Town in reaching its renewable energy targets, Ward said: “I think smart technology development is a massive business opportunity.”