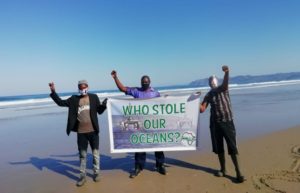 This past Saturday (21 November) was World Fisheries Day – a day that highlights the critical importance of fish and the lives they sustain and issues of concern such as over-fishing and fishing rights. The Green Connection also continues to raise awareness of the negative implications of offshore gas and oil exploration and drilling for the small-scale fishers living in about 136 coastal communities around the country.

The environmental justice organisation calls for a halt to all oil and gas exploration or production, off South Africa’s coastline, and calls for the Minister of energy to publish the country’s much-anticipated Integrated Energy Plan (IEP) for public comment.

The Green Connection’s Liziwe McDaid, “We believe that without a proper energy plan, one that allows for input from all South Africans, we risk investing in things – such as further oil and gas exploration, and drilling – that could only serve narrow vested interests rather than the greater public good. Government must consider the wider impacts of these decisions because it may not lead to increased employment or poverty-alleviation for most citizens. And, where these activities take place, quite the opposite could happen. More unemployment and more poverty.”

According to McDaid, the rationale for South Africa’s energy choices should be assessed and evaluated using the best available evidence. An IEP that involves meaningful public consultation and robust debates, will improve the country’s response to climate change and move us toward the just energy transition that is needed to address the country’s deteriorating energy situation. The Green Connection is particularly concerned that the rights and livelihoods of citizens along the coast, who have been relying on the ocean for generations, are not fully recognised when assessing the feasibility of the government’s current proposed energy projects.

McDaid says, “For those dependent on the ocean, these plans could only disadvantage already-historically abused communities even further, by taking away their ability to make a living for themselves. In a country with such high rates of poverty and unemployment, small-scale fisheries must be recognised for the significant role they play in food security, poverty reduction and income generation. And, they must be allowed to have a say in what happens in their oceans. For this reason, The Green Connection has also been engaging with coastal communities, to help them understand their rights in the Environmental Impact Assessment (EIA) processes relating to drilling applications.” 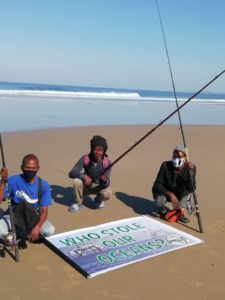 McDaid says, “In addition to the transformation in the fishing sector happening too slowly, which continues to keep these communities in poverty, in our outreach to communities in the Eastern, Western and Northern Capes we have found that many people do not know how to exercise their rights when it comes to new oil and gas projects in their areas. Far too many people do not know where they fit into the process and too often their voices are excluded. This raises the concern that the rights and livelihoods of these citizens, who have been relying on the ocean for generations, are not fully recognised when assessing the feasibility of such projects.”

According to The Green Connection’s Geologist Jan Arkert, a total of 9705 gas blowouts and associated oil spills were recorded in the European Union (EU) during the period 1990 and 2007. Between the years 2000 to 2007, nearly 3000 accidents were recorded, of which almost 60% occurred on semi-submersible oil and gas installations, such as the vessel being used off the Cape south coast. These events are associated with significant indirect social cost and direct economic losses to the fisheries industry.

“Nearly four months after the oil spill in Mauritius, there are still many uncertainties about compensation for the clean-up and the loss of livelihoods. In the meantime, local small-scale fishers have been hit hardest, stuck in limbo because the oil spill has devastated their coastline and their livelihoods. This should be a lesson for South Africa. The oil spill catastrophe has also highlighted the need to develop stronger policies and plans to protect the environment and the people most affected,” adds McDaid.