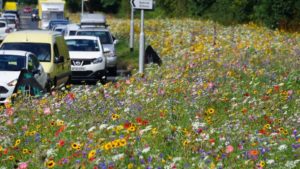 Eight miles of wildflowers have been planted in Rotherham.

A long-running campaign encouraging councils to let neatly-mown grass verges become mini meadows where wildflowers and wildlife can flourish appears to be building up a head of steam.

Since 2013, Plantlife has been telling authorities the move could help them save money and boost their green credentials.

Several have taken the message on board. An eight-mile “river of flowers” alongside a major route in Rotherham was widely praised on social media recently and roadside meadows have also popped up in Nottinghamshire, Derbyshire, Birmingham, Newcastle and Sheffield.