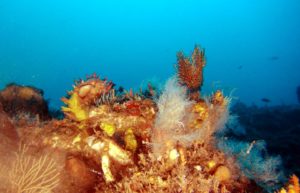 The Intergovernmental Panel on Climate Change (IPCC) Special Report on the Ocean and Crysophere in a Changing Climate reveals the extent of the crisis facing humanity as the ocean and its services begin to show signs of collapse.

Although the ocean is inextricably linked with the climate, the two working together to make planet Earth habitable, this is the first time that the IPCC has turned its attention to the marine realm. The resulting report conveys what marine scientists and NGOs like WILDOCEANS (a programme of the WILDTRUST) have been communicating, that the ocean is beginning to crumble under an onslaught of stressors from overfishing to pollution, compounded by climate breakdown – and it needs protection.

The effect of climate breakdown is the most serious, creating acidification, heating and deoxygenation. These three factors have been present in every mass extinction event in Earth’s history; all three are active in the ocean now.

Professor Dan Laffoley of the IUCN World Commission on Protected Areas: “We are an ocean world, run and regulated by a single ocean and we are pushing that life support system to its very limits through heating, deoxygenation and acidification. We are well past ‘wake up calls’ – what we need now is enlightened self-interest to deliver the actions that protect the ocean and climate and which in turn protect and support humanity.”

The timescales at work within the ocean mean that changes already put into its system – such as warming – will remain at work for hundreds of years, consequently, even with immediate action to curb temperature rise and cut CO2 emissions, ocean services to the planet could still be at risk.

This is why it is so important that all extraneous stressors on the ocean which can be controlled, are. Overfishing, pollution, destruction of habitats, ecosystems and biodiversity are all stressors which can be stopped, or better monitored to support the resilience of the ocean to withstand the climate crisis.

Lisa Speer of the Natural Resources Defense Council: “The ocean is losing its ability to sustain itself, and us. We must, as a matter of utmost urgency, reduce greenhouse gas emissions and simultaneously protect large areas of the global ocean – 30% by 2030 would be a good start—from harmful human activity. Just like a healthy person is better able to cope with illness than an already sick one, a healthy ocean will be much more able to withstand the overwhelming effects of climate change.”

Although the picture painted by the IPCC is undeniably bleak, there are measures which can be taken now to help bolster the resilience of the ocean and which governments need to finally and robustly take action on.

Protecting the high seas by 2020

Between now and the end of 2020, the High Seas – the area beyond the national jurisdiction of any state, which makes up half the planet and two-thirds of the whole ocean – should be protected under international law. A new treaty is being negotiated at the United Nations and states should complete this in 2020 in line with a UN General Assembly resolution and with high ambition.

State parties to the legally binding Convention on Biological Diversity will negotiate new targets to protect biodiversity at a meeting in 2020. The target for marine biodiversity should be to protect at least 30% of the ocean through implemented highly and fully protected areas, with the remaining 70% of the ocean sustainably managed.

Bringing an end to overfishing and pollution in all its forms and preventing further biodiversity, ecosystem and habitat loss are essential measures within our reach.

Tackling climate breakdown and holding warming at or as close to 1.5 degrees Celsius as possible is essential if the ecosystem services of the ocean are to survive. All states need to commit to new and more ambitious plans (NDCs) in 2020 to achieve this.